Last week I put up a post with charts showing total, per‐​pupil, public school spending between the 1999–00 and 2014–15 school years, as well as breaking out spending for a handful of states facing notable education unrest. Due to popular demand—if that’s what you call very mild comments from a few people on Twitter and Facebook—this post is going to break that spending into numerous subcategories used by the federal government in the tables that formed the bases for most of the charts. This post will only look at aggregate national data, but next week I’ll break down spending for those embattled states. 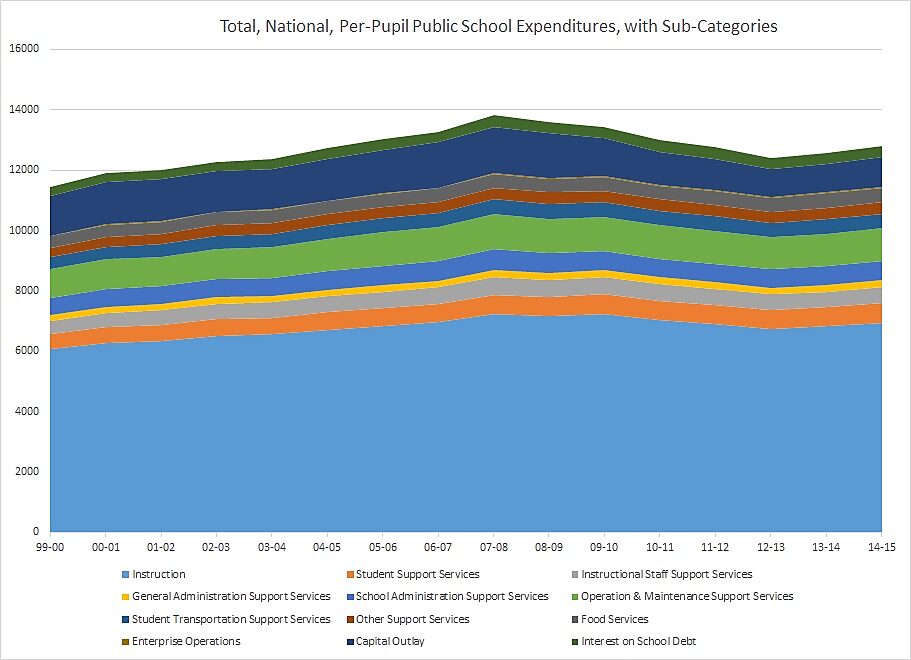 Looking at this inflation‐​adjusted chart, you can get a sense for how big numerous components of spending are relative to each other, and how they have moved over the 15‐​period. I won’t define all the categories—indeed, the federal definitions themselves are not entirely clear—but the two biggest ones that people are most likely to be interested in are “instruction,” which includes really important things like teacher and principal pay, and “capital outlay,” which covers costs for things such as acquiring property and new buildings. Also important are “student support services” and “other support services,” which include compensation for people like guidance counselors and speech pathologists, and costs for business support services.


Overall we see the same trend as previously: spending up between 99–00 and 07–08, down between 07–08 and 12–13, then trending back up. Just eyeballing the chart it appears that the one area that saw a very meaningful dip over the period was capital outlay.


Is it? Crunching the numbers between 99–00 and 14–15, it seems to be. Only two categories of spending saw drops for the entire period: the very tiny “enterprise operations”—basically, funding from selling things—and capital outlays. Enterprise operations dropped 2 bucks per student, or about 9 percent, while capital outlay fell by $314, or almost 24 percent. In contrast, instructional spending rose by $876, or approaching 15 percent.


Between the pre‐​Great Recession, 07–08 spike, and 14–15, numerous categories saw drops, with the biggest dip in both dollar and percentage terms coming to capital outlays: $540 and 35 percent. Instructional spending fell only a modest 4 percent, or by $286. Meanwhile, “student support services,” “other support services,” and “food services” actually experienced increases. For the entire 15‐​year period, student and other support services saw the biggest increases in percentage terms, both growing by about a third.


What does this mean? At least in the aggregate, public schools did not cut spending for the overall period, but did during the recession and its aftermath. But it was in buildings and other property where the most serious cutting occurred both overall and post‐​Recession, with instructional outlays growing overall and various supports receiving increases even in the worst of times.


Of course, the aggregate does not apply to any given state, where the locus of education authority is held. See you next week for a look at some of those guys.