Show Me the (Education) Money!

With teacher strikes and demonstrations in several states tied not just to teacher compensation, but also the belief that public schooling has been starved for resources, it is worth looking at the spending data. Not trying to say what “fair" teacher pay is, or the degree to which spending may affect test scores; just seeing what we've been spending, and how it has changed over the years.

Let’s start with relatively recent history, the only span of years for which the federal government has readily available, total per-pupil spending data for public K-12 schools at the state level. (These data were assembled by pulling from the version of this table for every year and adjusting for inflation.) We want to look at total spending because taxpayers don’t just spend money for operating costs such as teacher salaries, but also on things like new school buildings, expenditures only included in total cost tabulations.

Look at the colorful figure below—every state is a line—and you will see that inflation-adjusted spending generally went up, on average (the bold, black line) from $11,132 in 99-00 to $13,187 in the 2014-15 school year, an 18 percent real increase. Of course, as you can see, there are some states that spent a lot more at the outset—and boosted spending much more over time—than others. 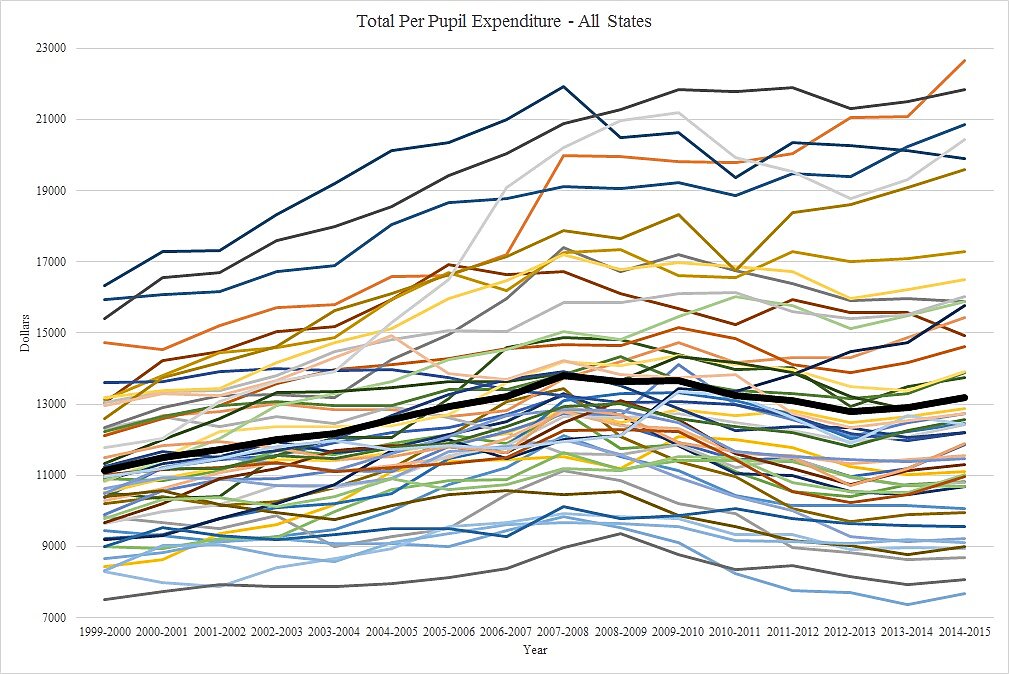 What you will also notice is a steady climb in spending between 99-00 and 07-08, a decline until 12-13, then an uptick. That’s the effect of the Great Recession and the slow recovery from it. The 12-13 trough saw an average per-pupil expenditure of $12,789, a bit more than the amount that was spent in 04-05, just 8 years earlier. As many people worried about public school resources have accurately noted, there was a drop in K-12 spending, and on average it has not yet returned to the peak spending of 07-08. It also, however, did not take a deep dive. 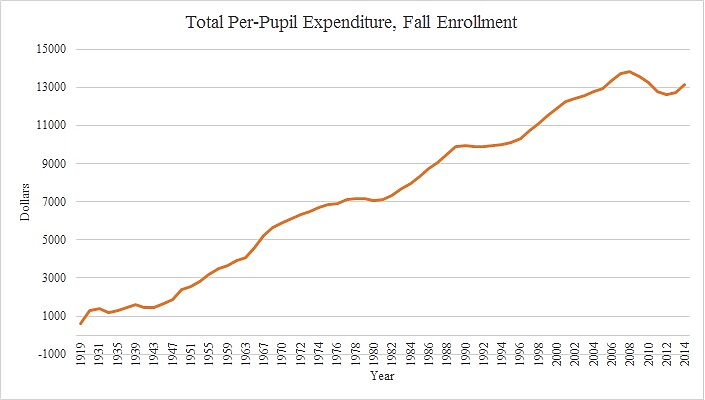 Seeing the long-term funding picture provides some crucial context that is too often neglected in discussions of public K-12 funding broadly: It had escalated for decades, and only for a few years did it drop.

That said, let’s look at total spending since 99-00 in the states that have seen the most-discussed labor unrest—Arizona, Colorado, Kentucky, Oklahoma, and West Virginia. All are on the lower-end of spending. But have they been cutting?

In Arizona, spending has been a bit all over the map since 99-00, but was at a low point in 13-14, with just a slight uptick the following year. 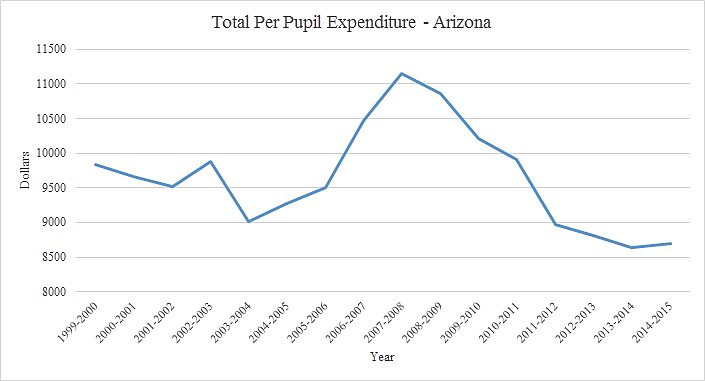 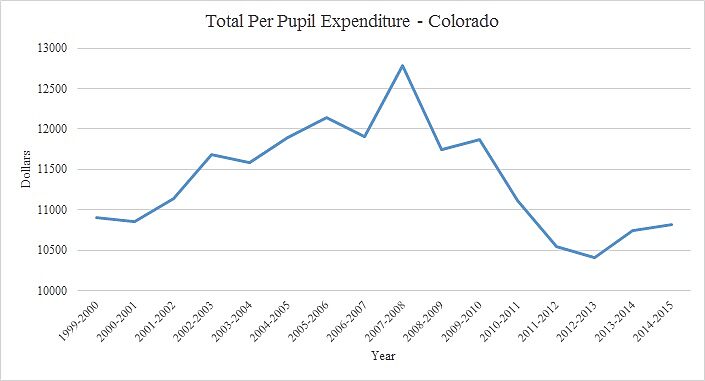 How about Kentucky? Not as striking a trend as Arizona or Colorado, with spending increasing almost 30 percent over just 8 years, and only dropping a relatively small amount afterwards, giving back around $1,000 after a more than $2,600 boost. 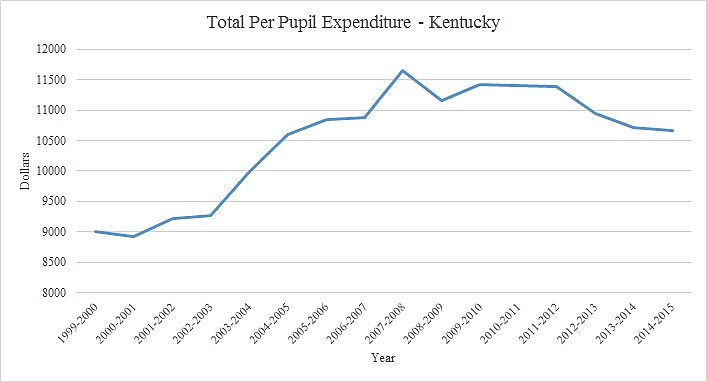 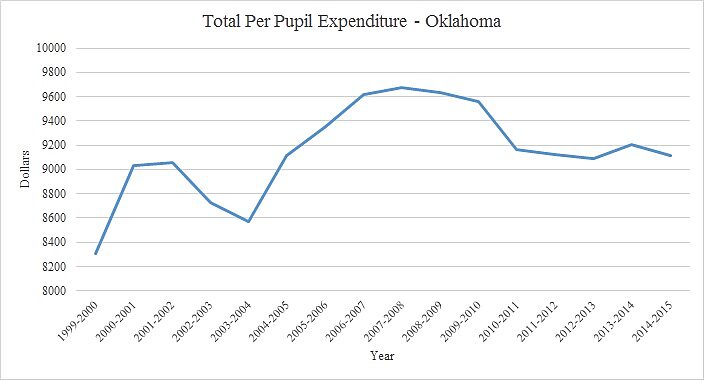 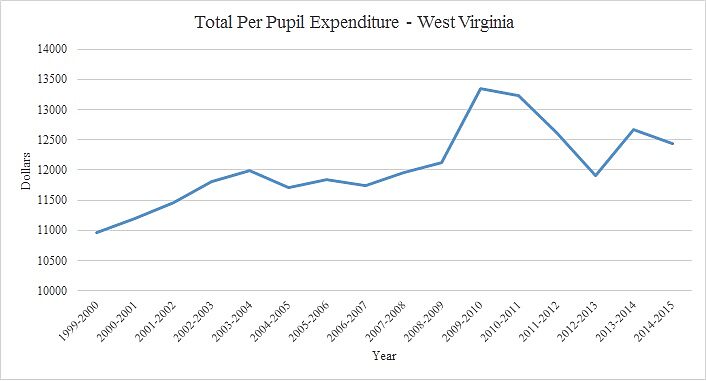 Bottom line: Many states have seen decreasing per-pupil expenditures for public schools since the Great Recession. But how deep varies from state to state, and it comes on the heels of nearly a century of almost unremitting spending growth.