Today, Education Next released the results of its annual survey of public opinion on education policy. The 2016 results are somewhat disappointing for advocates of school choice because support for some types of choice programs has diminished over the last decade, particularly for voucher programs targeted to the poor. However, support for scholarship tax credit (STC) programs — once again, the most popular type of school choice program — has remained high and steady.


When asked whether they favored or opposed a proposal to offer a “tax credit for individuals and corporate donations that pay for scholarships to help low‐​income parents send their children to private schools,” 53 percent responded favorably while only 29 percent expressed opposition. Respondents were nearly evenly divided over universal vouchers, with 45 percent in support and 44 percent opposed. However, nearly half of respondents opposed targeted vouchers while only 37 percent supported them. Charter schools fared better, but many people don’t know what they are. When the survey asked about charter schools without defining what they are, nearly half of respondents were neutral. However, when the survey defined them as “publicly funded” schools that are “not managed by the local school board” that “are expected to meet promised objectives, but are exempt from many state regulations,” the amount of respondents who expressed no opinion dropped to 21 percent while support increased from 34 percent to 51 percent and opposition increased from 17 percent to 28 percent. 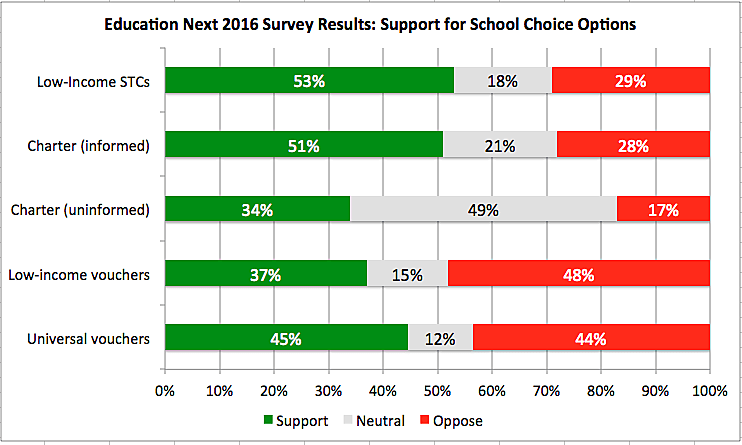 Unfortunately, once again the survey failed to ask about education savings accounts.


Support for STCs was even higher among parents (60 percent), African‐​Americans (64 percent), and Hispanics (62 percent). This is not surprising since minorities are more likely to be low‐​income and therefore choice deprived. Interestingly, support for STCs was higher among self‐​described Democrats (57 percent) than Republicans (49 percent), although the GOP has generally been more supportive of school choice than the Democratic Party. Democrats were also more likely to support both universal and targeted vouchers (49 and 42 percent, respectively) than Republicans (41 and 31 percent, respectively).


Previous Education Next surveys also found that STCs garnered the highest amount of support from among the various school choice policies. Since 2009, support has increased from 46 percent to 53 percent, although it is down from a high of 60 percent in 2014. However, at 29 percent, opposition to STCs is also at its highest level since EdNext began including the question in their survey. Neverthess, there is a 24 percentage point advantage for those who favor STCs. (Note: EdNext did not ask about STCs in their 2013 survey.) 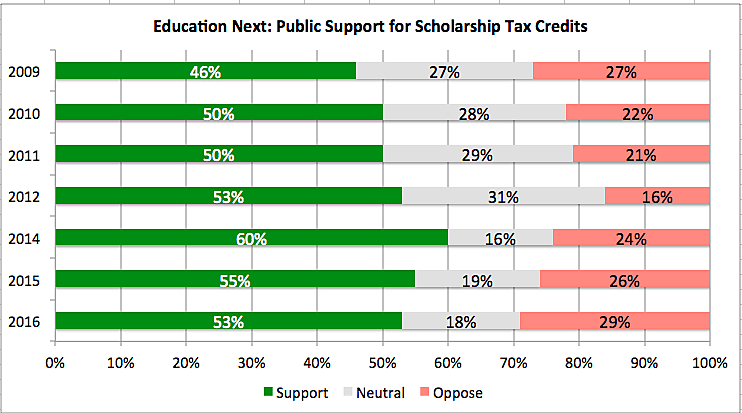 With the addition of South Dakota earlier this year, there are now 17 states that have 21 STC programs. Last year, more than 230,000 students used tax‐​credit scholarships to attend the private school of their choice, compared to about 150,000 students who used school vouchers and about 6,000 who used education savings accounts ESAs. Their high level of public support makes them the most politically viable form of school choice and because they are privately (rather than publicly) funded, they have a perfect record of being upheld as constitutional, making them the most constitutionally viable form of school choice yet devised as well.


Although ESAs have some advantages over both vouchers and traditional STC programs because they allow for greater customization, it is possible to combine the advantages of ESAs and STCs by privately funding the education savings accounts with the assistance of tax credits. For more information, see the report I coauthored with Jonathan Butcher of the Goldwater Institute and Arizona Justice Clint Bolick (then of Goldwater): “Taking Credit for Education: How to Fund Education Savings Accounts through Tax Credits.”