On Monday, Education Next released the results of its 2015 survey on education policy. Neal McCluskey already summarized the key findings, but I want to highlight one finding in particular: scholarship tax credits (STCs) are the most popular form of private educational choice. 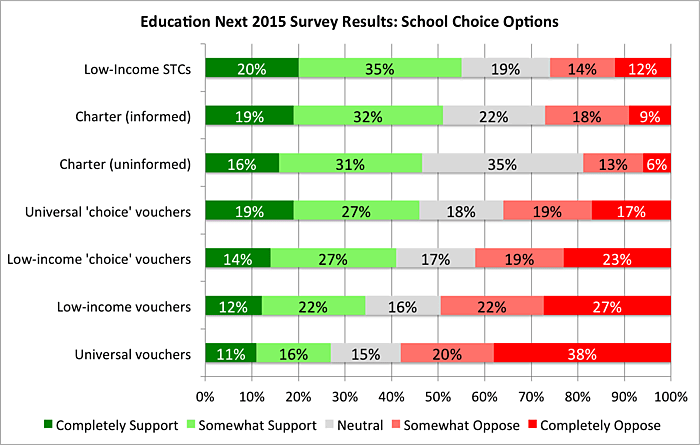 Support for STCs was even higher among parents (57 percent), African-Americans (60 percent), and Hispanics (62 percent). This is not surprising since minorities are more likely to be low-income and therefore choice deprived. Those voicing support for STCs more than doubled those opposed in the general public (26 percent) and more than tripled the opposition among African-Americans (16 percent) and Hispanics (18 percent).

Previous Education Next surveys--as well as the Friedman Foundation's survey last year--also found the most support for STCs among school choice policies. 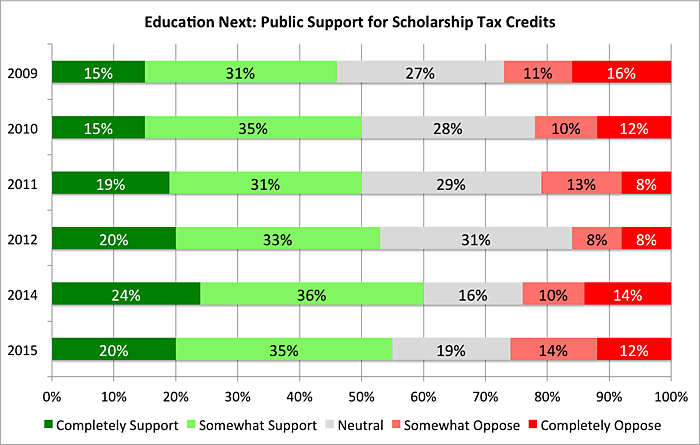 Support for STCs dipped slightly from a high of 60 percent last year, but it is still higher than any other year since Education Next first started asking the question in 2009. (They did not ask about STCs in 2013.) However, the poll also revealed the second highest level of opposition since 2009.

In the Friedman Foundation's 2015 survey, released in July, scholarship tax credits, school vouchers, and education savings accounts all received high levels of support that were within the margin of error of each other when the question was prefaced with an explanation of how the policy worked:

However, when not preceded by a prompt, only 39 percent of respondents supported school vouchers while 26 percent were opposed. (The other questions were only asked with an explanatory prompt because few Americans are familiar with STCs or ESAs.) Charter schools were the least popular with 53 percent in support and 27 percent opposed.

Encouragingly, support for STCs and ESAs in the Friedman poll was highest among Americans aged 18-34 with 72 percent and 75 percent support respectively. These results may well indicate a coming school choice tidal wave.