Last week I reviewed the latest survey on education policy from the Friedman Foundation but I missed something that should warm the cockles of the hearts of everyone who supports greater choice in education: each generation is progressively more favorable and less opposed to educational choice.

Scholarship tax credits (STCs) remain the most popular form of educational choice. Even among the 55+ cohort, there is a 20 point spread in favor of choice, 53 percent to 33 percent. Support increases in each cohort by 8 to 13 points. Meanwhile, opposition falls precipitously from 33 percent to only 14 percent. The 35-54 cohort has a 39 point spread in favor of educational choice and the 18-34 cohort has a whopping 60 point spread, 74 percent to 14 percent. 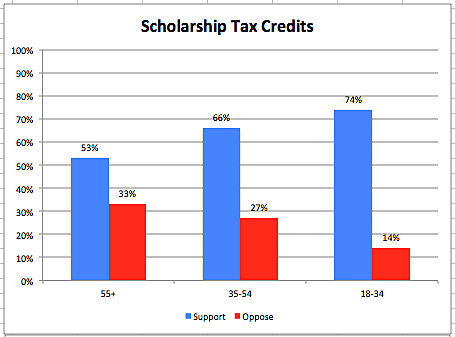 Vouchers are the second most popular of the three reforms. While the oldest cohort is slightly more pro-voucher than pro-STC, opposition is 7 points higher at 33 percent, for a spread of 16 points. The margin widens considerably to 32 points for the middle cohort (65 percent support to 33 percent opposition) and 44 points for the youngest cohort (69 percent support to 25 percent opposition), which is 16 points narrower than the spread for STCs. 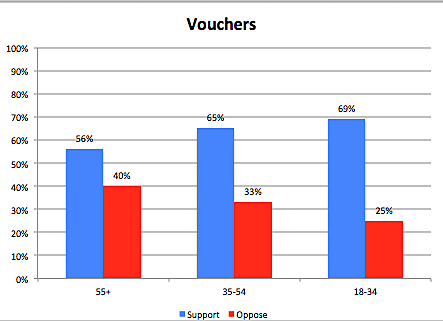 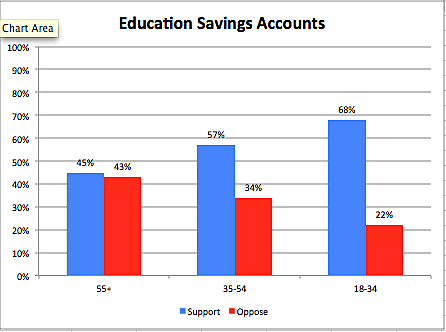 The survey data do not give us enough information to state with any certainty why younger Americans are more pro-educational choice than older Americans. Nostalgia for the "common school" among the oldest cohort may play a role. Another factor may be efforts to influence the culture like National School Choice Week or films like "Waiting for Superman" or "Won't Back Down." Or perhaps it's simply that members of the iPhone generation expect and demand choices and the ability to customize nearly every aspect of their lives, and the geographically-assigned, one-size-fits-all government schools seem like an anachronistic hold-out from another era.

These numbers accord with the findings of Harvard University's Program on Education Policy and Governance/Education Next, as detailed in Teachers versus the Public, which also found that younger Americans are significantly more likely to favor educational choice than older Americans.

More research is needed on what's actually driving these generational differences, but if trends continue, then we're likely to see a tidal wave of new and expanded educational choice programs in the coming decades.