Salt and CO2 Better for Tomatoes, Now for Lettuce, Too

Wow, will bacon be next?

Last fall we wrote about the improvement in tomato taste that results from growing them in elevated carbon dioxide and seawater (Idso and Michaels, 2015). Now it looks like the same treatment improves lettuce.

Enhancing crop nutritional value has long been a goal of the agricultural industry. Growing plants under less than optimal conditions for a short period of time generally increases their oxidative stress. To counter such stress, plants will usually increase their antioxidant metabolism which, in turn, elevates the presence of various antioxidant compounds in their tissues, compounds that can be of great nutritional value from a human point of view, such as helping to reduce the effects of ageing.

However, stress-induced nutritional benefits often come at a price, including a reduction in plant growth and yield, making it unproductive and costly to implement these practices in the real world. But what if there was a way achieve such benefits without sacrificing crop biomass, having our cake and eating it, too? An intriguing paper recently published in the journal Scientia Horticulturae explains just how this can happen, involving lettuce, salt stress, and atmospheric CO2.

According to Pérez-López et al. (2015), the authors of this new work, “few studies have utilized salt irrigation combined with CO2-enriched atmospheres to enhance a crop’s nutraceutical value.” Thus, the team of five Spanish researchers set out to conduct just such an experiment involving two lettuce cultivars, Blonde of Paris Badavia (a green-leaf lettuce) and Oak Leaf (a red-leaf lettuce and a common garden variety). In so doing, they grew the lettuce cultivars from seed in controlled environment chambers at either ambient or enriched CO2 for a period of 35 days after which they supplied a subset of the two treatments with either 0 or 200 mM NaCl for 4 days to simulate salt stress. Thereafter they conducted a series of analyses to report growth and nutritional characteristics of the cultivars under these varying growth conditions. And what did those analyses reveal? 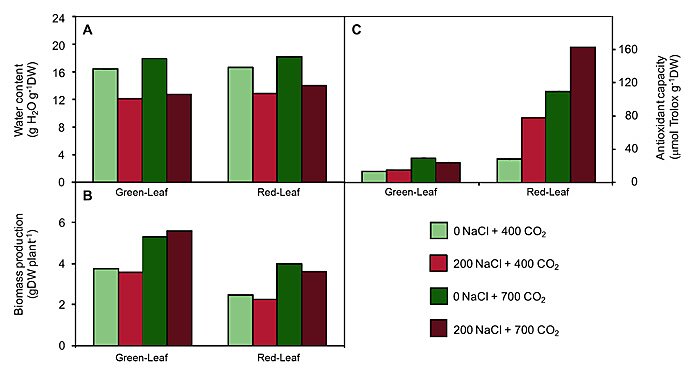 Pérez-López et al. also report that “under elevated CO2, both lettuce cultivars increased the uptake of almost all minerals to adjust to the higher growth rates, reaching similar concentrations to the ones detected under ambient CO2.” However, the red cultivar “seemed to gain a greater advantage from elevated CO2 than the green cultivar because it better adjusted both mineral uptake and antioxidant metabolism.”

Such positive findings bode well for the future of the lettuce industry, for as concluded by Pérez-López et al., “elevated CO2 alone or in combination with short environmental salt stress permits us to increase the nutritional quality (increasing the concentration of some minerals and antioxidants) of lettuce without yield losses or even increasing production.” And that is a future worth hoping for!

PS: One of us is going to run a seawater experiment on tomatoes this summer. Readers should get a full report around August 15!