One of the largest and fastest growing items in President Obama’s new budget is often overlooked. Net interest expenses will skyrocket over the next decade, growing by 250 percent.

The Congressional Budget Office (CBO) continues to warn about the rising burden of federal interest payments. Over the next decade, CBO expects net interest expenses will be the third fastest growing budget item. Net interest represents 24 percent of the increase in federal spending during that time period.

Second, the government has added federal debt quickly. Debt held by the public has grown by 120 percent since 2008, and that growth is expected to continue.

As a result of these two factors, CBO predicts that net interest will grow from 1.3 percent of gross domestic product in 2015 to 3 percent in 2025.

The president’s budget predicts a similar rise. It shows just how large interest expense will become over the next decade. By 2025 the nation will spend more on interest than it does on defense or nondefense discretionary spending, according to the president’s budget plan. Only spending on Social Security and Medicare will cost more than net interest.

The chart below shows the dramatic increase in net interest compared to defense and nondefense discretionary spending, as projected in the president’s budget.

Even with that sharp rise, this plan low-balls interest costs a bit compared to CBO. It assumes that the 10-year Treasury rate slowly climbs from 4.0 percent in 2019 to 4.5 percent by 2025.  CBO, on the other hand, assumes that the 10-year Treasury rate is 4.5 percent in 2019 growing to 4.6 percent in 2025. In fact, the president assumes a lower interest rate in each year of his budget request.  This means that the president expects net interest to cost $785 billion in 2025 compared to $827 billion for CBO. 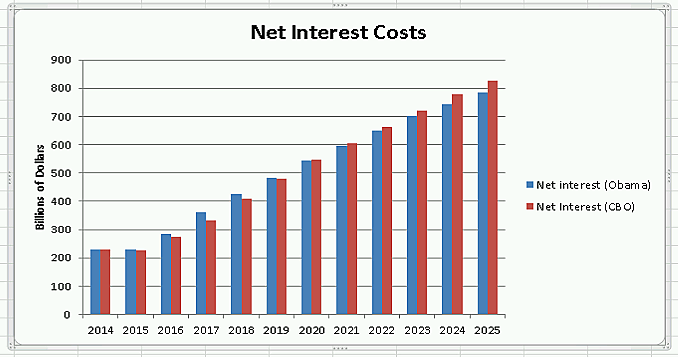 The president’s somewhat rosier assumptions regarding debt and deficits than CBO play a part in this comparison. As I showed on Monday, he predicts that the debt held by the public will be significantly less in 2025 than CBO does,  $20,307 trillion vs. $21,605 trillion.

Even under the president’s optimistic assumptions, net interest costs will grow quickly over the next decade, illustrating the importance of controlling the growth in federal spending. Our current path means that future generations could end up paying a high price for our current, excess spending.