Republicans Slowly Catch Up to the 21st Century

Public opinion on gay marriage has changed a lot in recent years, perhaps more rapidly than on any other major issue. Yet as Jonathan Rauch noted last year, one demographic group has resisted that change: Republicans. As he wrote:

In moving as decisively as they have on gay rights, the Democrats are following the country.…

But the dissenters have not vanished. Rather, they have holed up inside the Republican Party. According to polling by the Pew Research Center, two‐​thirds of Democrats and almost 60 percent of independents call same‐​sex relations morally acceptable; only a bit over a third of Republicans agree. White evangelicals, in particular, are unique among major demographic and religious categories (including Catholics) in their fierce disapproval of homosexuality, and these days the vast majority of them (70 percent, according to Pew) are Republican or lean Republican.

To put the matter bluntly, the Republican Party is becoming an isolated bastion of anti‐​gay sentiment. That is not because Republicans and conservatives are immune to the general trend toward acceptance of homosexuality. It is because the trend is slower among Republicans.

But in today’s Washington Post there’s some interesting evidence of movement among Republicans. A strong majority of voters in Virginia, a state that passed a gay marriage ban in 2006, and 40 percent of Republicans now say “it should be legal for gay couples to get married.” Note the changes from 2006 in this Post graphic: 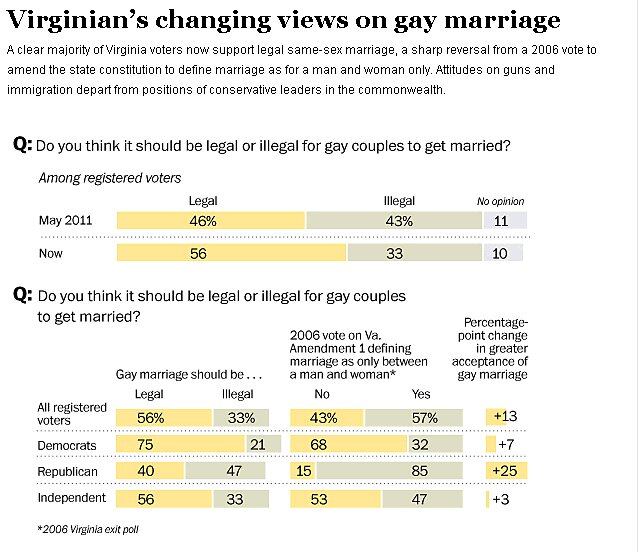 Note especially that column in the lower right. How has public opinion in Virginia changed since the 2006 amendment vote? Support for gay marriage (or opposition to a ban) has risen by 13 points. Independents are up only 3 points. Democrats are up by 7 points, perhaps because of the endorsement of President Obama. And Republican support is up 25 points.


Last year, I called the sudden silence of Republican leaders on gay marriage “the sound of social change.” It looks like they knew which way the wind was blowing in their own base.