The Republicans took the stage in their first presidential debate Thursday night. Of the 16 major candidates, eight have gubernatorial experience. I have written a number of times recently about the fiscal records of the candidates with gubernatorial experience. Their records are instructive. A governor who promises to cut federal spending is more believable if he held spending in check when he was governor.

As my blog post earlier in the week detailed, there are a number of ways to measure how and why state spending changes. Gubernatorial policies play a large role in influencing state general fund spending. Other factors, such as the state’s budget process, legislative policies, and federal mandates, can contribute to changes in spending, but as a state’s Chief Executive, governors have impact.

Using data from the National Association of State Budget Officers, I wanted to see just how much each governor increased spending on an annual basis. Analyzing the data on an annual basis allows us to control for the length of governor tenure. George Pataki was governor of New York for twelve years, while Scott Walker has been governor of Wisconsin for only four years. Comparing Pataki’s increase of 39 percent to Walker’s increase of 16 percent is unfair to Pataki. 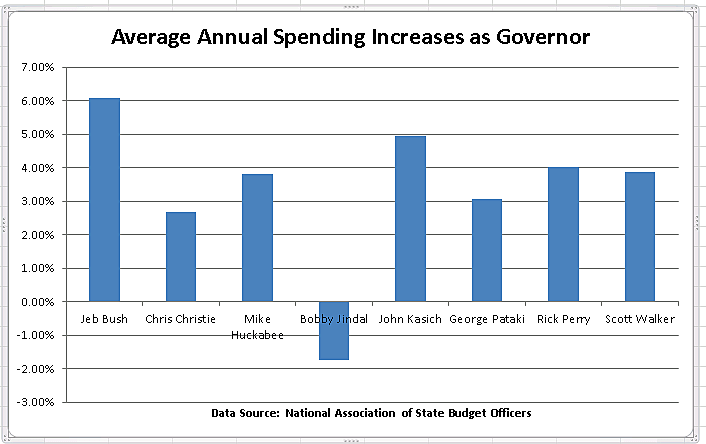 But this comparison is somewhat biased because population grows at different rates in the states. As a state’s population grows, the demand for government services, such as schools and police protection, may increase by a related amount.. 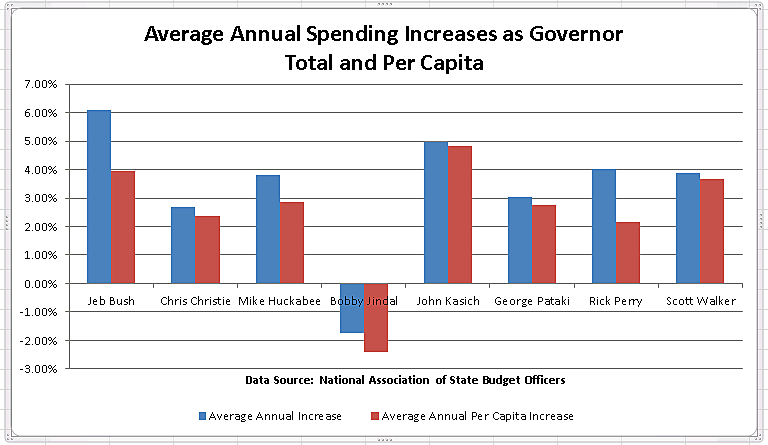 During the debate, these presidential candidates tried to highlight their records as governor. Many factors impact state spending growth, but gubernatorial policies directly impact the amount a state spends. Comparing spending growth figures to peers allows us to determine which candidates are frugal and which are spendthrifts.