Yesterday, Ohio Governor and presidential candidate John Kasich appeared on Fox News. During his interview with host Chris Wallace, Kasich was asked about his “D” in our 2014 Fiscal Policy Report Card on America's Governors.

Here is a transcript of the exchange:

WALLACE: Unemployment down from 9.1 percent to 5.2 percent. And the top income tax rate has been lowered from 6.2 percent to 4.9 percent.

But the Cato Institute, a libertarian think tank, gave you a "D" on its government's [sic] report card just last year, noting the budget grew 13.6 percent in 2014 and that over your time as governor, government jobs have increased 3 percent. A "D", sir?

KASICH: Well, I don't know who these folks are, Chris, another Washington group. But, look, we have the lowest number of state employees in 30 years and in addition to that, our budget overall is growing by about 2 percent or 3 percent, and our Medicaid growth has gone from 9 percent when I came in to less than 4 percent and no one has been left behind. We haven't had to cut benefits or throw anybody off the rolls. So, we pay attention to the mentally ill and the drug addicted and the working poor.

Then, they said, "Well, he's getting in too late." Now they say, "What a brilliant move."

So, I pay no attention to folks in Washington. I want to move a lot of the power and money and influence out of that town back to where we live like normal Americans, you know?

We seem to have two conflicting views here. In 2014 we gave Governor Kasich the worst score of any governor in the country on spending. We noted the rapid increase, above national averages, in state spending in Ohio. At the same time, Kasich is saying that spending is only growing by “2 percent or 3 percent” in Ohio.

When I summarized Kasich’s record on July 21st, I said:

So who is right?

Every state has a different budget structure, and so we use spending data from the National Association of State Budget Officer (NASBO) to compare the states. NASBO tries to create a consistent dataset, which allows us to make comparisons as neutral as possible.

Ohio budgets can be measured in at least three different ways. By any measure, spending is growing in Ohio. The question is by how much.

Given Kasich’s record this is an important inclusion. In 2013 Governor Kasich expanded Medicaid over strong objections within the legislature. For that newly-eligible population, the federal government is currently paying 100 percent of the costs. To exclude the effect of Medicaid expansion from spending data minimizes the cost of Kasich’s policies.

According to the state’s Legislative Service Commission, Medicaid expansion is overbudget. Eighteen months into the program, costs are 63 percent over original projections. The problem for Ohio is that  the 100 percent federal reimbursement will not continue. Starting in 2017, Ohio will need to start contributing to the costs. By 2020, 10 percent of the costs will be borne by Ohio taxpayers.

Kasich’s team prefers the third type of spending data, known as all-funds data, as they told the Columbus Dispatch. This includes all Ohio state spending and all of the federal contributions made to Ohio’s budget. It includes things like federally-funded education and transportation spending. From fiscal year 2012 to fiscal year 2014, the last year for which data is available, spending increased by 6 percent.

By using the all-funds number, Kasich is trying to use federal spending to mask the quick increase in general fund spending. Federal spending—besides Medicaid—is not increasing in Ohio that quickly. Kasich has little control over federal spending, but he is using it hide how much Ohio’s state spending has grown during his tenure. Additionally, Kasich is campaigning on a promise to cut federal spending and balance the federal budget. Under those promises, federal aid to states would decrease. If this was currently the case, Kasich’s record would look worse.

Outside of our dispute over how to measure state spending, Kasich criticized our information on the growth of Ohio’s state employees. The difference between our numbers and his is the difference between when the measurements occurred. Our report card was released last October and used the most recent data available. Since publication, Ohio has decreased the number of state employees.

This graph from the St. Louis Federal Reserve shows the initial growth and the subsequent decrease. 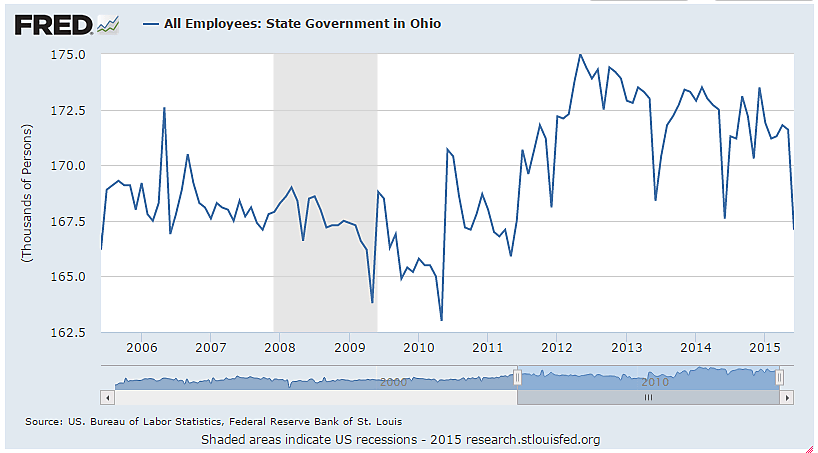 Kasich dismissed Cato’s research yesterday suggesting that we overestimated spending growth during his tenure. Our data is correct, and so is his. Kasich seems to pick the dataset that shed the best light on him. Ohio spending has increased quickly when you look at the general fund.