In his Election Day tweet attacking Rep. Mark Sanford, President Trump declared that Sanford’s opponent, Katie Arrington, “is tough on crime and will continue our fight to lower taxes.” Well, maybe. She doesn’t mention either issue on her campaign website. (In fact, she has nothing but bland buzzwords about any issue.)


This tweet is typical. It seems like every time Trump tweets an endorsement or a criticism of a candidate, he calls the candidate “strong (or weak) on crime.” I count 60 Trump tweets since his inauguration that use the word “crime.” Some complain that he is being investigated for a “made up, phony crime” or charge Hillary Clinton with “many crimes.” But most seem to relate to a candidate: Dan Donovan is “strong on Borders & Crime.” Kevin Cramer of North Dakota is “strong on Crime & Borders.” Doug Jones is “WEAK on Crime.” Adam Laxalt is “tough on crime!” “Chuck and Nancy…are weak on Crime.” Ralph Northam is “weak on crime.” Also “VERY weak on crime!” “Keep our country out of the hands of High Tax, High Crime Nancy Pelosi.” And so on.


It’s not obvious that this makes political sense. Candidates aren’t talking much about crime, perhaps because they recognize the substantial decline in crime rates. In numerous Gallup polls over the past year, only 2 to 4 percent of Americans have identified crime as the country’s most important problem. Though about 50 percent of people say they worry a great deal about crime when asked that question directly.


But here’s the thing. Crime in the United States is in fact way down.


Here’s a long‐​term look at the most visible crime, homicide: 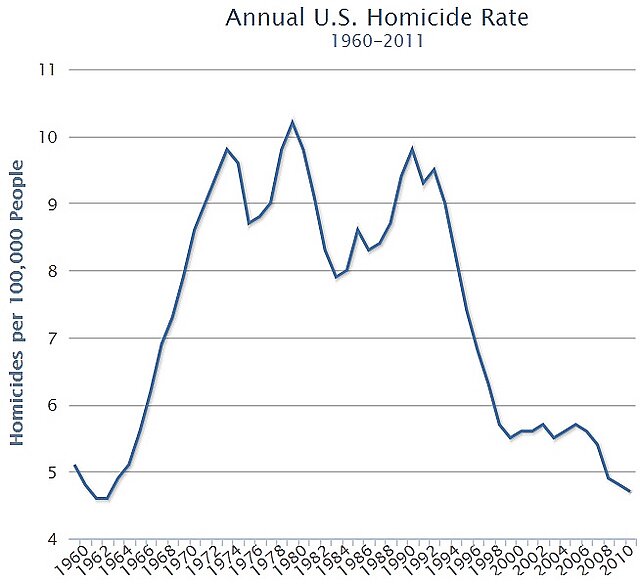 And yet, as the same source illustrated, at the very time when crime rates had fallen steadily and substantially for 20 years, 68 percent of Americans said the national crime rate was getting worse. (Crime rates continued to fall after 2011, though there was an uptick in murders in 2015 and 2016. The rate appears to have fallen in 2017.)


Of course, the president is better informed than average Americans. Surely White House staff have explained the crime statistics to President Trump. So why does he talk about “this American carnage” and pound away at the “crime” issue when endorsing candidates who never talk about it? Perhaps it’s part of his continuing use of racially charged language. Perhaps “crime and borders” is just shorthand for the kinds of social change he thinks his voters fear. Or maybe it reflects the fact that he grew up in New York City during a time of sharply rising crime. We all get ideas in our youth (“American cars aren’t well made”) that may stick with us even us as the facts change.


Whatever the reason, it seems curious that he so often cites “strong and crime” as the reason to support political candidates who haven’t talked about crime.