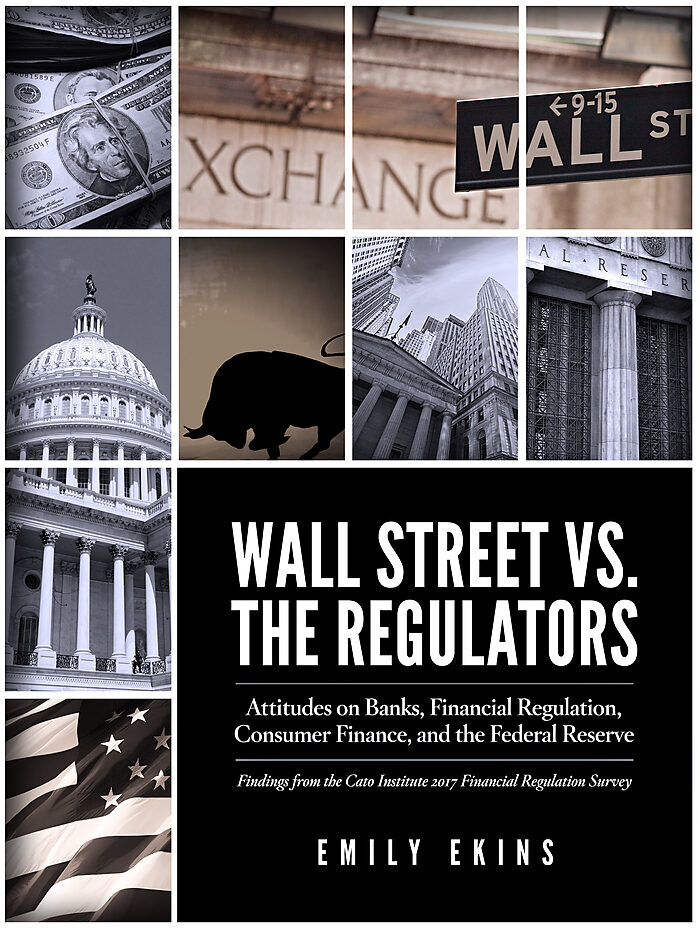 The new Cato Institute 2017 Financial Regulation national survey of 2,000 U.S. adults released today finds that Americans distrust government financial regulators as much as they distrust Wall Street. Nearly half (48%) have “hardly any confidence” in either.

Americans have a love-hate relationship with regulators. Most believe regulators are ineffective, selfish, and biased:

But most also believe regulation can serve some important functions: 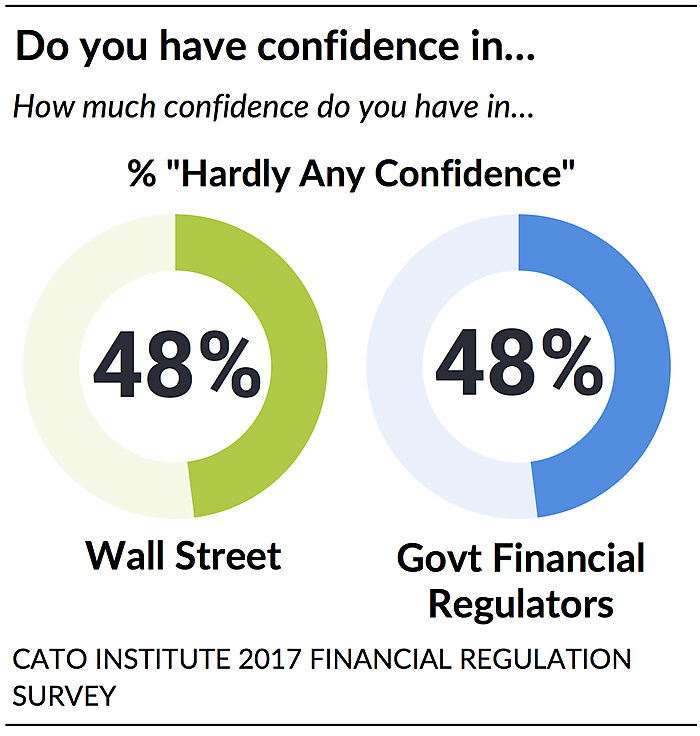 However, Americans do not think that regulators help banks make better business decisions (74%) or better decisions about how much risk to take (68%). Instead, Americans want regulators to focus on preventing banks and financial institutions from committing fraud (65%) and ensuring banks and financial institutions fulfill their obligations to customers (56%).

Americans Are Wary of Wall Street, But Believe It Is Essential

Nearly a decade after the 2008 financial crisis, Americans remain wary of Wall Street.

At the same time, however, most Americans believe Wall Street serves an essential function in our economy.

Polls routinely find that a plurality or majority of Americans want more oversight of Wall Street banks and financial institutions. This survey is no different. A plurality (41%) of Americans think more oversight of the financial industry is needed. However, only 18% think the problem with federal oversight of the banking industry is that there are “too few” rules on Wall Street. Instead, 63% say the government either fails to “properly enforce existing rules” (40%) or enacts the “wrong kinds” of regulations on big banks (23%). 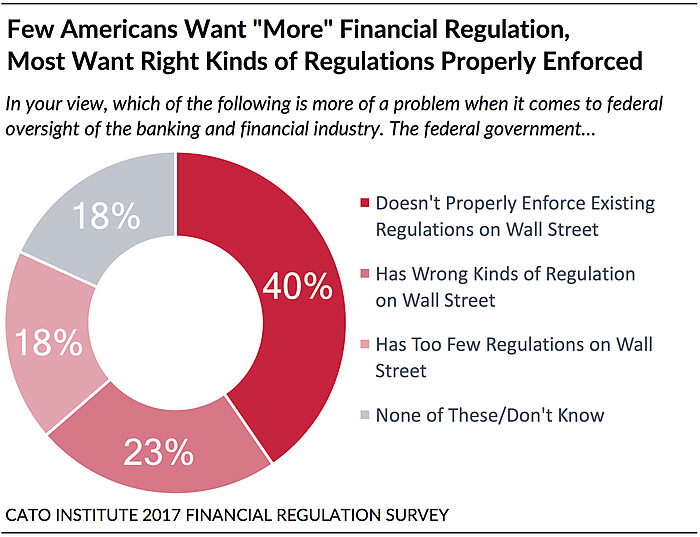 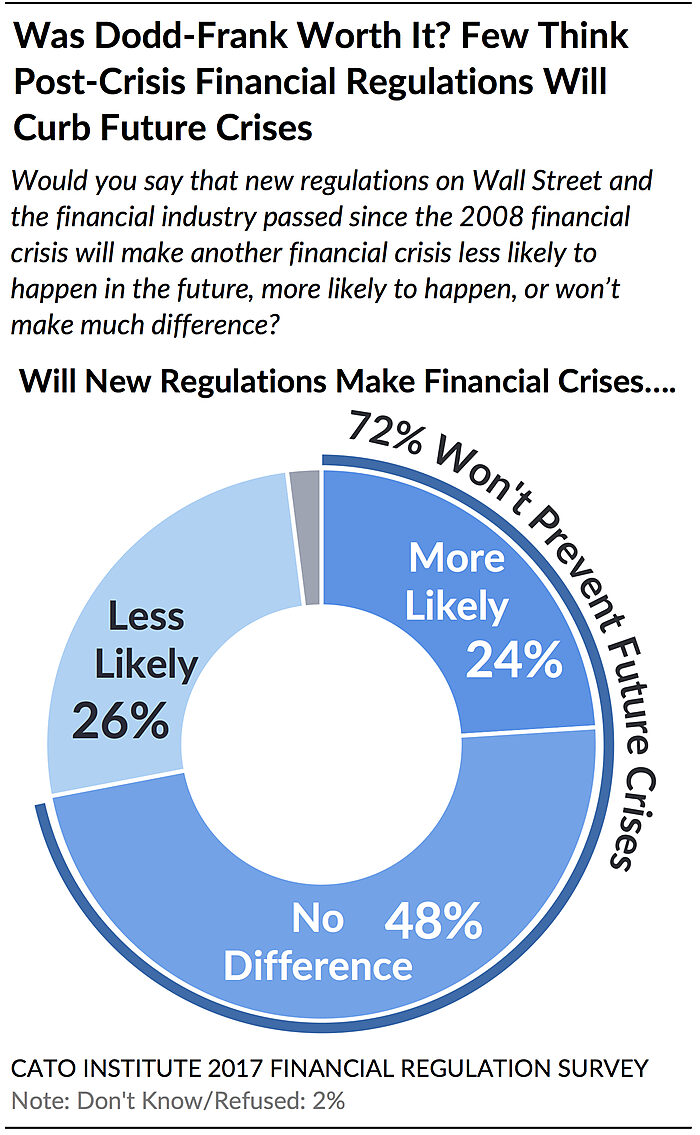 Most Are Skeptical Dodd-Frank Will Prevent Future Financial Crises

Americans Oppose Too Big to Fail

Americans reject the idea that some banks are so important to the U.S. economy that they should receive taxpayer dollars when facing bankruptcy. Instead, 65% say that “any bank and financial institution” should be allowed to fail if it can no longer meet its obligations. A third (32%), however, believe that some banks are too important to the U.S. financial system to be allowed to fail.

Despite Distrust of Wall Street, Americans Like Their Own Banks and Financial Institutions 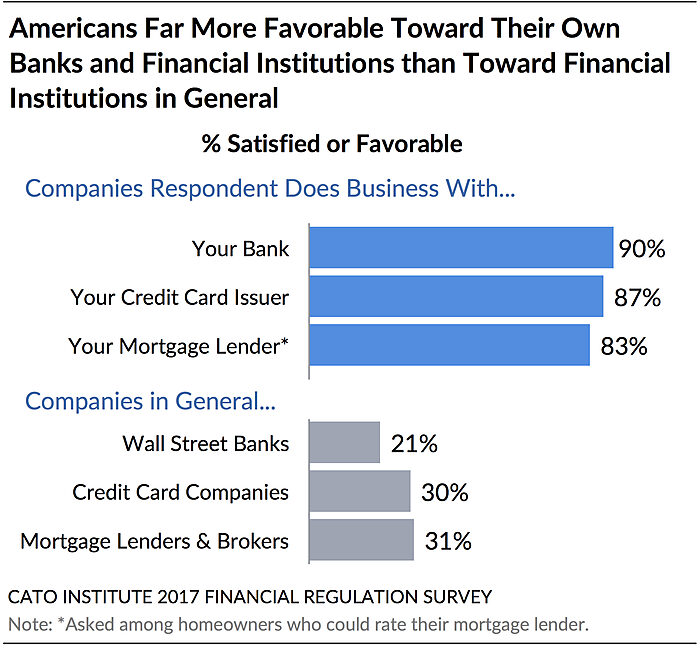 Financial regulators have a variety of tasks and goals. The public, however, believes that regulation should serve two primary functions: to protect consumers from fraud (65%) and to ensure banks fulfill obligations to their account holders (56%). Other initiatives such as restricting access to risky financial products (13%) is a priority among far fewer people. 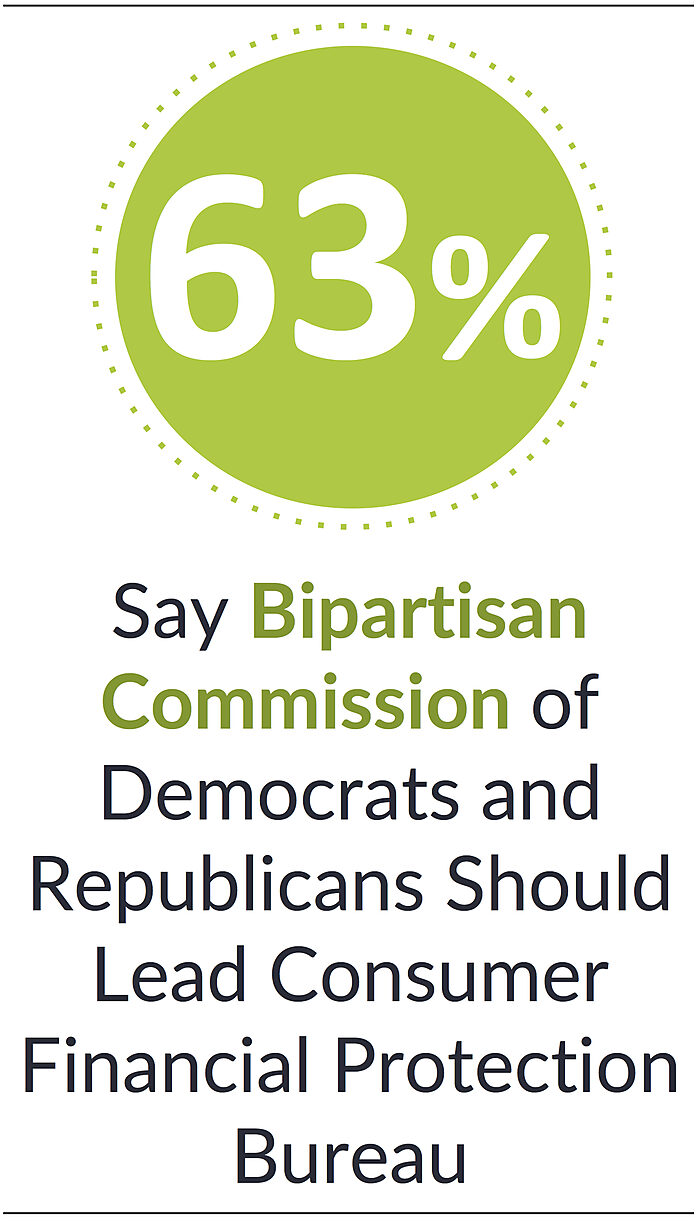 Americans as Likely to Say CEOs, NFL Football and NBA Basketball Players Are Overpaid, But Most Oppose Government Regulating Pay

Americans are about equally likely to think that CEOs (73%) and professional athletes like NBA players (74%) and NFL players (72%) are paid “too much.” Yet, the public doesn’t think the government ought to regulate the salaries of either corporate executives (53%) or professional athletes like NBA players (69%). Nonetheless, there is more support for regulating CEO pay (43%) than NBA salaries (28%). 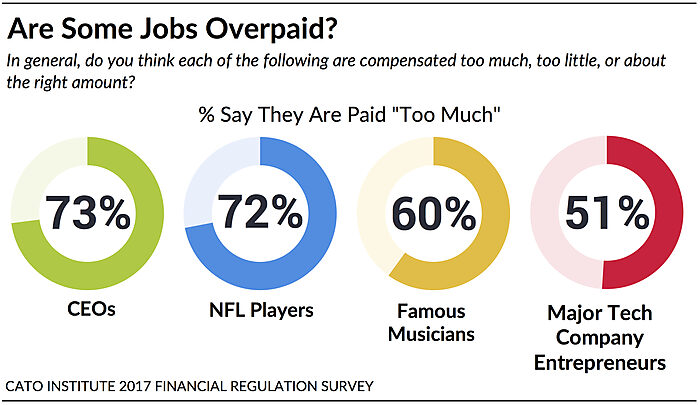 Most Support Risk-Based Pricing for Loans, Say Low Credit Scores are Due to Irresponsibility

Nearly three-fourths of Americans (74%) say they’d be “unwilling” to pay more for their home mortgage, car loan, or student loan to help those with low credit scores access these loans.

Americans may be unwilling to pay more to help those with low credit scores in part because a majority (58%) believe low credit scores are primarily due to irresponsibility, rather than circumstances beyond a person’s control (41%). 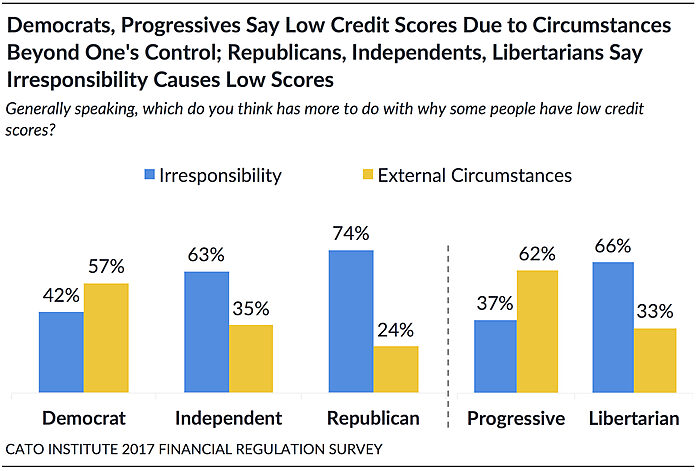 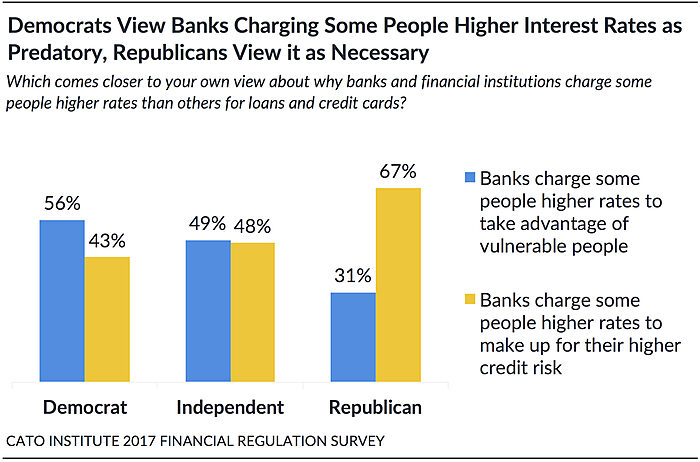 Most Oppose Accredited Investor Standard, Say Law Should Not Restrict Investment Options Based on Wealth 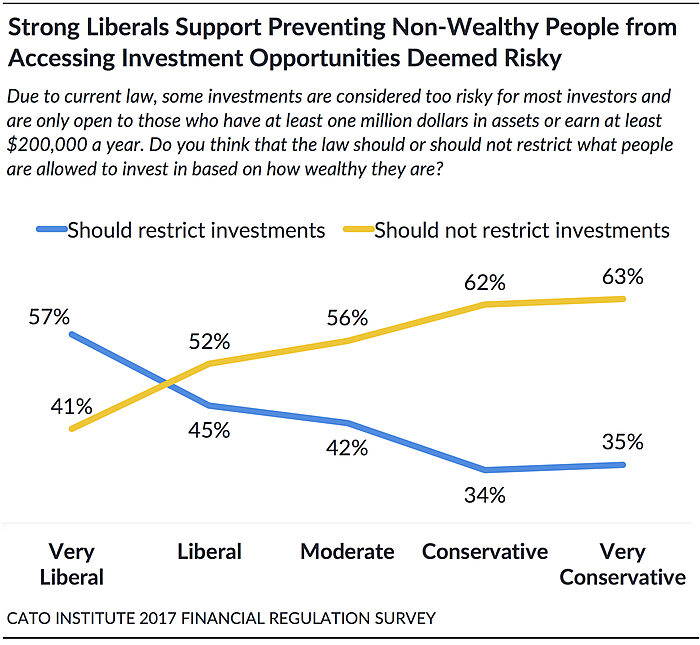 Due to current law, some investments are deemed too risky for the common investor and are only available to those with one million dollars in assets or who make $200,000 or more a year. However, a majority of Americans (58%) say the law should not restrict what people are allowed to invest in based on their wealth or income—even if the investments in question are risky. Thirty-nine percent (39%) think the law should restrict access to certain investments deemed risky. 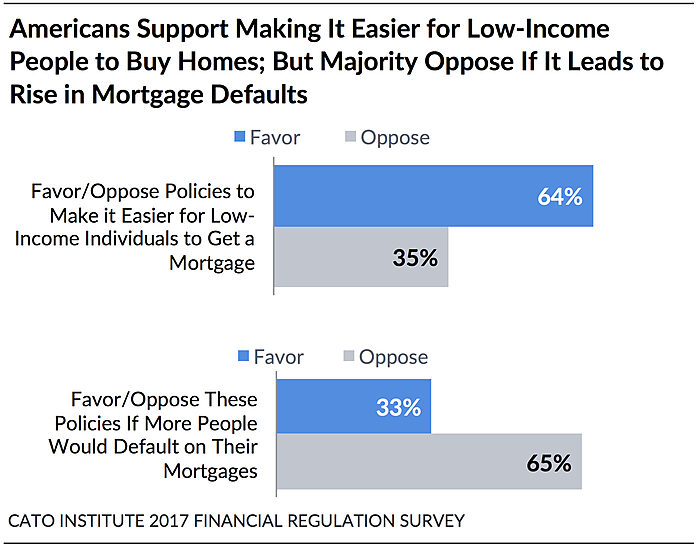 Nearly two-thirds (64%) of the public support government policies intended to make it easier for low-income families to obtain a mortgage. However, a majority (66%) would oppose such policies if they resulted in more mortgage defaults and home foreclosures.

43% of Americans Would Pay for $500 Unexpected Expense with Savings

Less than half (43%) of Americans say they would pay for an unexpected $500 expense using money from savings or checking. The remainder would put the expense on a credit card (23%), ask family and friends for money (8%), sell something (7%), borrow the money from a bank or payday lender (5%), or simply not be able to pay it (12%).[2] 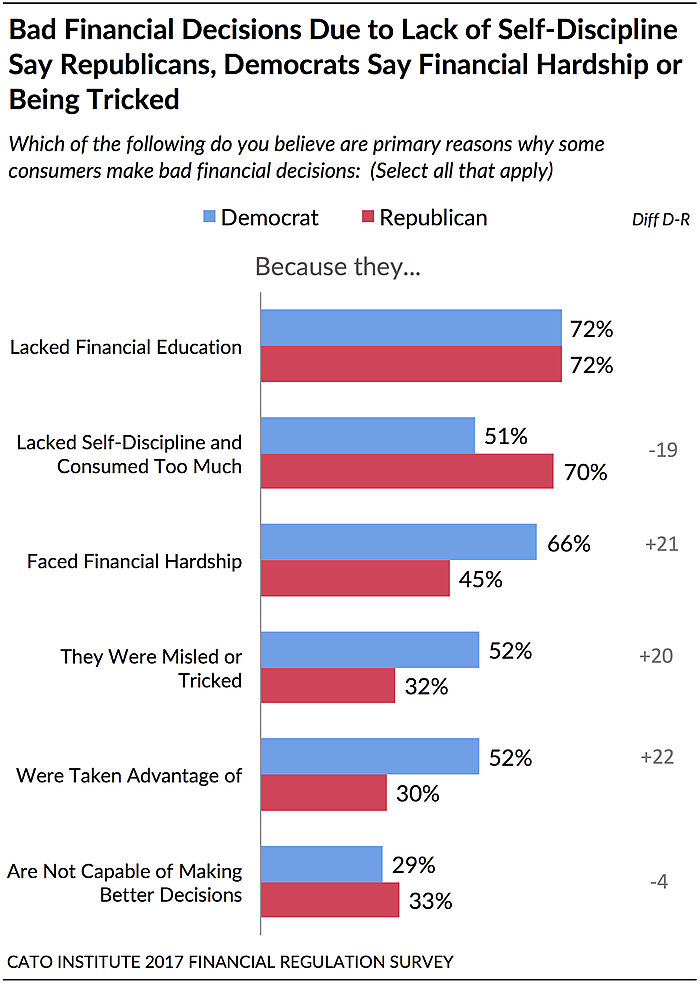 The public says the top three reasons consumers make bad financial decisions include lacking financial education (70%), lacking self-discipline (60%), and facing financial hardship (54%). Less than half say that consumers being “misled or tricked” (43%), taken advantage of (42%), or incapable (30%) are primary causes.

When it comes to promoting and managing consumers’ financial health, most believe (58%) that individuals “should be allowed to make their own decisions even if they make the wrong ones.” However, 4 in 10 say that sometimes government regulators “need to write laws that prevent people from making bad decisions.” 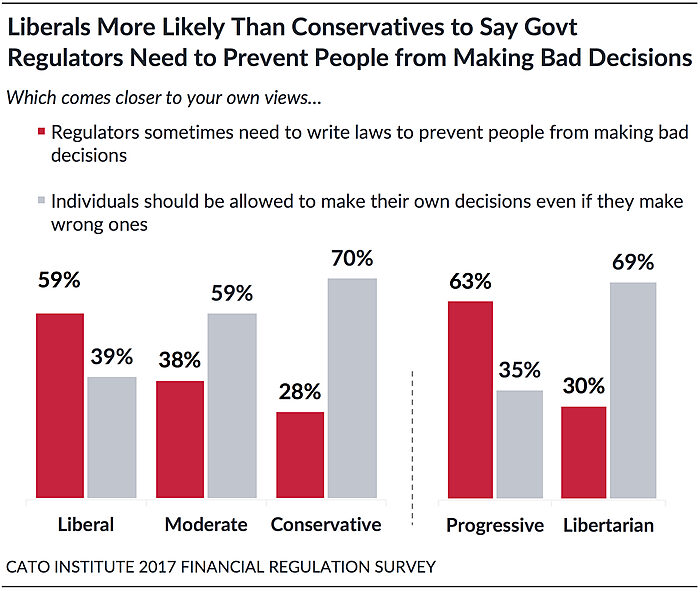 Few Americans Know a Lot about the Federal Reserve; Among Those Informed, the Fed Polarizes Partisans 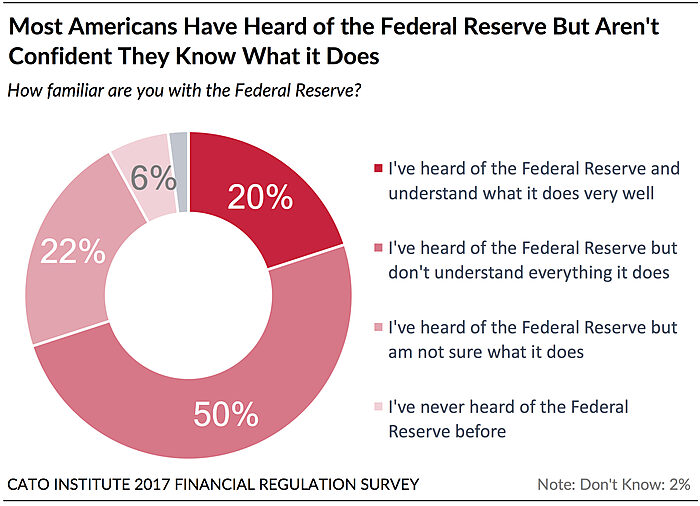 The Cato Institute 2017 Financial Regulation Survey was designed and conducted by the Cato Institute in collaboration with YouGov. YouGov collected responses online May 24-31, 2017 from a national sample of 2,000 Americans 18 years of age and older. Restrictions are put in place to ensure that only the people selected and contacted by YouGov are allowed to participate. The margin of error for the survey is +/- 2.17 percentage points at the 95% level of confidence.


[1] Asked of 4% of respondents who have used payday or installment lenders in the past 12 months, N=71.

[2] One percent (1%) say they would find some other way to pay the unexpected expense.