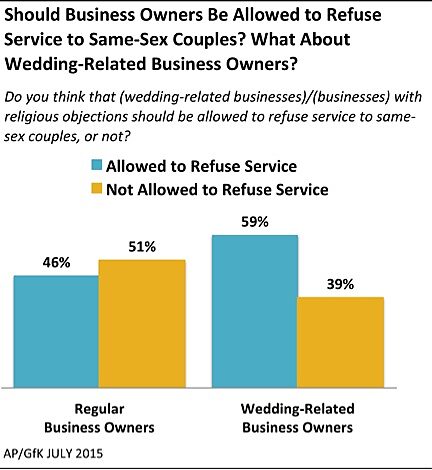 A recent AP/​GfK poll finds a slim majority (51%) of Americans say businesses with religious objections should be required to serve same‐​sex couples. Forty‐​six percent (46%) say these business owners should be allowed to refuse service. However, for business owners specifically offering wedding‐​related services, Americans say these particular businesses “should be allowed to refuse service” by a margin of 59% to 39%.


These results correspond with the nuanced argument Cato scholar Roger Pilon recently made in the Wall Street Journal. Pilon explains that businesses open to the public ought to serve everyone; however, business owners with religious objections (who are not a monopoly) should not be forced to participate in the creative act of planning and participating in the wedding of a same‐​sex couple. Referring to two couples who recently were heavily fined for declining to provide services for same‐​sex weddings, he writes:

“Because they represent their businesses as open to the public, the Kleins and Giffords shouldn’t be able to deny entrance and normal service to gay customers… But it is a step further—and an important one—to force religious business owners to participate in a same‐​sex wedding, to force them to engage in the creative act of planning the event, baking a special‐​order cake for it, photographing it, and so on.”

Americans seem inclined to support this nuanced view that businesses should serve all customers regardless of sexual orientation, religion, race, gender, income, national origin, etc.—but that wedding‐​related businesses requiring owners’ direct participation in the wedding should not be forced to provide service against the owners’ religious beliefs.


Taken together, these polls suggest that a sizeable share of Americans think the state should not prohibit same‐​sex couples from getting married and that the state should not require wedding‐​related business owners with religious objections to provide services against their will.