Paul Krugman has a blog post at the New York Times that seems to be based on no research at all. But it has a snappy four-cell matrix so you'll know it's like real economics.

Krugman's argument is that "there basically aren’t any libertarians." And here's the graph that proves it:

See how small the letters are in two of the boxes? That shows you that there aren't any people in those boxes. "There ought in principle, you might think, be people who are pro-gay-marriage and civil rights in general, but opposed to government retirement and health care programs — that is, libertarians — but there are actually very few." And there are also very few people who are "socially illiberal" and supportive of government social programs, he says.

But you know, there's research on this. David Kirby and I have done some of it, in studies on "the libertarian vote." But two political scientists examined a similar matrix back in 1984 and found roughly even numbers of people in each box.

Part of the trick here is that Krugman has used a vague term, "socially liberal," for one of the dimensions of the matrix, and a radical policy position, "no social insurance," for the other dimension. The logical way would be to use either common vague terms for both dimensions -- say "socially liberal/conservative" and "fiscally liberal/conservative" -- or specific and similarly radical terms for both dimensions, something like "no social insurance" and "repeal all drug laws." Wonder how many people would be in the boxes then?

"No social insurance" is a very radical position. Even many libertarians wouldn't support it. Like Hayek. So to find the divisions in our society, we might choose a specific issue of personal freedom -- gay marriage, say -- along with an equally controversial economic policy such as school choice or a constitutional amendment to balance the budget.

If you use either set of dimensions, it's pretty clear that you're going to get substantial numbers of libertarians (broadly speaking) and also of those incongruous creatures Krugman can only call "hardhats." Libertarians often call people who support substantial government intervention in both economic and personal issues "statists" or authoritarians. In our studies we call them populists, as does the Gallup Poll.

The media constantly discuss politics in terms of liberals and conservatives, so very few voters are even familiar with the term libertarian (or populist) and thus few choose it to describe themselves.

It is of course true that the number of "real" libertarians -- people who read Hayek and Nozick and Rothbard, or Reason magazine, or indeed The Libertarian Mind -- is small. Maybe a few hundred thousand? (Though Hayek was selling pretty well when the government created a financial collapse and responded by bailing out Wall Street.) Maybe a few million if you include Ayn Rand? But it's also true that there aren't many conservatives if you mean people have read The Conservative Mind, and not many liberals if you mean people who read John Rawls and Paul Starr.

The question for politics, which is where Krugman started, is how many people there are who hold broadly libertarian views, or views that diverge from liberal and conservative approaches in a libertarian direction. That's what pollsters try to measure. For more than 20 years now, the Gallup Poll has been using two questions to categorize respondents by ideology:

Here’s a graphic depiction of the number of respondents who gave libertarian answers to both questions in the Bush-Obama years: 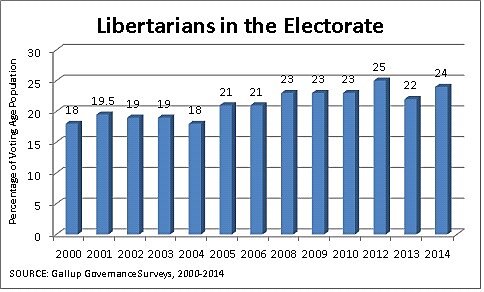 The results surprised us. Fully 59 percent of the respondents said “yes” to the first question. That is, by 59 to 27 percent, poll respondents said they would describe themselves as “fiscally conservative and socially liberal.”

The addition of the word “libertarian” clearly made the question more challenging. What surprised us was how small the drop-off was. A healthy 44 percent of respondents answered “yes” to that question, accepting a self-description as “libertarian.” We summed all that up in this handy but not necessarily helpful graph: 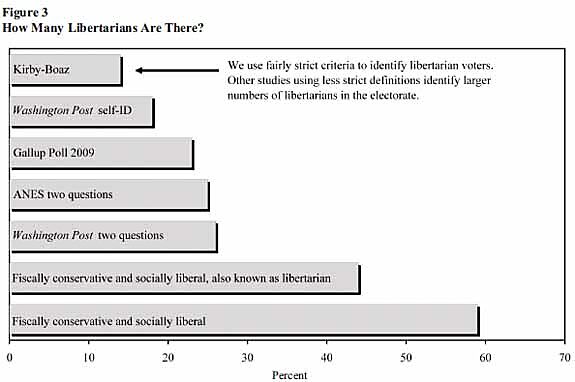 All these numbers are open to debate, of course. Do these views affect how people vote? I think our studies on the libertarian vote present evidence that they do. But I'm sorry that Paul Krugman didn't do a Google search on "how many libertarians" before dashing off his post.

Krugman says there just aren't many people who hold views that cross red/blue, liberal/conservative lines, who believe in, say, both gay marriage and lower taxes, or oppose both marijuana legalization and free trade. That is, there are no people who are, as he puts it, "socially liberal" but also "fiscally conservative." In the real world, of course there are. It's not hard to find them in polls, or by talking to people. Are they just inconsistent? Or might they have broadly libertarian views (or broadly pro-government views)?

Libertarians are like dark matter. There may be no direct proof we exist, but you can infer us due to how we affect Alternet & Salon.

I don't think a Princeton professor would give this paper a passing grade.