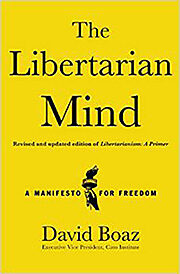 Libertarianism — the philosophy of personal and economic freedom — has deep roots in Western civilization and in American history, and it's growing stronger. Two long wars, chronic deficits, the financial crisis, the costly drug war, the campaigns of Ron Paul and Rand Paul, the growth of executive power under Presidents Bush and Obama, and the revelations about NSA abuses have pushed millions more Americans in a libertarian direction. The Libertarian Mind, by David Boaz, the longtime executive vice president of the Cato Institute, is the best available guide to the history, ideas, and growth of this increasingly important political movement.

Boaz has updated the book with new information on the threat of government surveillance; the policies that led up to and stemmed from the 2008 financial crisis; corruption in Washington; and the unsustainable welfare state. The Libertarian Mind is the ultimate resource for the current, burgeoning libertarian movement.

The Libertarian Mind is now available in print, ebook, and audio formats. See below. 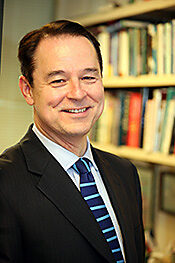 He is a provocative commentator and a leading authority on domestic issues such as education choice, drug legalization, the growth of government, and the rise of libertarianism. Boaz is the former editor of New Guard magazine and was executive director of the Council for a Competitive Economy prior to joining Cato in 1981. The earlier edition of The Libertarian Mind, titled Libertarianism: A Primer, was described by the Los Angeles Times as "a well-researched manifesto of libertarian ideas." His other books include The Politics of Freedom and the Cato Handbook for Policymakers.

His articles have been published in the Wall Street Journal, the New York Times, the Washington Post, the Los Angeles Times, National Review, and Slate, and he wrote the entry on libertarianism at the Encyclopedia Britannica. He is a frequent guest on national television and radio shows, and has appeared on ABC's Politically Incorrect with Bill Maher, CNN's Crossfire, NPR's Talk of the Nation and All Things Considered, The McLaughlin Group, Stossel, The Independents, Fox News Channel, BBC, Voice of America, Radio Free Europe, and other media.

Where to Buy the Book

Where Can I Buy the Audiobook?

What Others Are Saying

"America is a country full of people who feel personal liberty and individual responsibility in their guts. This book puts those guts into words. America is also a country full of politicians, academics, and self-possessed elites who mistrust liberty and responsibility to the bottom of their souls. This book plants a kick in that fundament." - P.J. O'Rourke

"For anyone who wants to explore the ideas that are energizing the right and exasperating the left, David Boaz's clear and often passionate book is the place to begin." - Jonathan Rauch, Brookings Institution

"The Libertarian Mind is so convincing critics will want to condemn it, regulate it, tax it, fleece it, and forbid it. Fortunately, good ideas haven't been outlawed — yet." - Peter Thiel, technology entrepreneur and investor, author of Zero to One

"The Libertarian Mind is a brilliantly updated version of Libertarianism: A Primer. Boaz's message is both timeless and extraordinarily relevant to the challenges that we are facing today. It deserves to be read carefully and thoughtfully by everyone who truly cares about creating a more ethical and prosperous world." - John P. Mackey, Cofounder and Co-CEO, Whole Foods Market

"David Boaz's The Libertarian Mind unites history, philosophy, economics and law to bring alive a vital tradition of American political thought that deserves to be honored today in deed as well as in word." - Richard A. Epstein, New York University School of Law

"David Boaz has been my guide to the history, economics, and politics of freedom for years." - John Stossel.

Are You a Libertarian? 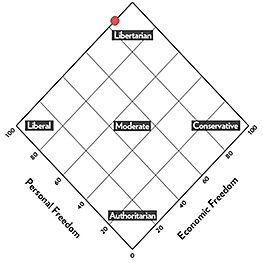 Somewhere between 30 and 40 million Americans hold libertarian views. Are you one of them? Take this quiz and find out just how libertarian you really are!

Of course, very few people will have “perfect scores” in any one direction. Read more about libertarianism in the new book The Libertarian Mind: A Manifesto for Freedom, and see how closely you line up!