The "big news" from Janet Yellen's recent press conference, which was hardly news at all to those who have followed the Fed's past announcements, was that Fed officials, having long promised to eventually undo much if not all of the vast balance sheet growth brought about by the Fed's various QE operations, and having delayed paying the piper for as long as pressure from without permitted, are finally about to get started.

But don't imagine that Fed staff have been idle during the long delay. On the contrary: they spent much of it developing their highly scientific balance-sheet reduction strategy, first revealed back in June. As the Fed doesn't seem to have given that highly scientific plan a name, I hope I may take the liberty of proposing one. Let's call it "Operation SNAIL."

In case you haven't guessed, the acronym stands for "Stall Now And Inch-along Later." For if there's any clear point to the strategy the Fed has chosen, it's to shrink as slowly as possible — more slowly, even, than it would if it merely allowed maturing assets to passively roll-off its balance sheet.

A purely passive unwind would, to be sure, have been problematic, for it would have meant slimming down at a very uneven pace, with bunches of assets rolling off the Fed's balance sheet during some intervals, and relatively few rolling off in others.

The Fed has chosen to address only the first of these problems, by placing varying limits or "caps" on the value of assets it will allow to roll-off its balance sheet during any particular month. Starting in October with maximum roll-offs of $6 billion in Treasuries and $4 billion in MBS, it plans to increase the caps by those same amounts every three months for a year, after which they'll remain fixed at $30 billion for Treasury securities and $20 billion for MBS. Whenever the value of maturing assets of either sort exceeds its assigned cap, the Fed plans to reinvest the difference.

Following this plan it will take until sometime in 2020 for the Fed to slim-down from its current $4.5 trillion in assets to a bit more than $3 trillion, or well over three times its (not exactly svelte) size before the crisis. It's a diet of sorts, to be sure. But then, so is skipping the cheesecake now and then.

In his Econbrowser blog post on the subject, James Hamilton illustrates the progress of the Fed's unwind in several nice charts, including the one reproduced below.  Besides showing the slow pace of the unwind, the chart also shows that $3 trillion or so is as low as the Fed is likely to go: by the end of 2020, it's balance sheet will start swelling once again.

In comparison, were the Fed committed to getting its balance sheet back on its pre-crisis trajectory by the end of 2020,  it would be planning on slimming down by at least another $500 billion, and perhaps by as much as another $1 trillion.

Why So Slow? Why So Little?

Were the Fed's plan the only way for it to achieve a smooth unwind, its snail-like pace might be justified. But it isn't: the Fed might easily have provided for a smooth unwind, at a faster pace, by combining higher roll-off caps with occasional active asset sales during low roll-off periods.

And what about the limited extent of its planned diet? Hamilton argues, correctly, that so long as the Fed sticks to its present operating framework, the volume of reverse repos it conducts, as well as the value of Treasury balances held with it, will remain highly volatile, and that it will take "a lot of reserves sloshing around the system to cover that kind of variation." However, as Hamilton also notes, such changes as would make all that extra cash unnecessary are neither revolutionary nor difficult to implement. Instead, they consist of things like "changing the way it conducts reverse repos, using temporary open-market operations to add or withdraw reserves as needed to offset changes in the Treasury balance, or moving to a true corridor system for controlling interest rates" (my emphasis).

Hamilton's last suggestion brings us to the true crux of the matter, which is that, despite all its talk of "normalization," which to the general public means getting back to its pre-crisis ways, the Fed has no intention of normalizing its operating procedures. That is, it doesn't plan to return to its pre-crisis, zero-IOER "corridor" system, or to any other sort of corridor arrangement. Instead, it wants to keep the (leaky) "floor"-type system it introduced in October 2008. In a floor system, banks are kept flush with excess reserves, and monetary control is exercised, not be adjusting the quantity of reserves so as to achieve a particular equilibrium federal funds rate, but by manipulating the interest rate the Fed pays on banks' required and excess reserves holdings, alone or along with the Fed's overnight reverse-repo (ON-RRP) rate. Because an abundant supply of excess bank reserves is a necessary feature of any floor-type operating system, the Fed's decision to retain such a system is the proximate reason why it's planning to stay pudgy.

I wrote "proximate" because the question remains: why is the Fed so hung-up on its post-crisis floor system? If you think the answer is "Because it allows for improved monetary control," kindly let me know your address and hat size so I can mail you a dunce cap. For far from it being the case that the Fed's new operating system has proven its worth as a means of overall monetary control, it is largely owing to that system that the Fed has failed for the better part of six years now to hit its two-percent inflation target.

If that failure strikes you as inconsequential, or even desirable, consider that its cause — a flawed monetary transmission mechanism that lacks the usual link between growth in the stock of bank reserves on one hand and growth in the broad money stock on the other — poses the grave risk of a far more spectacular failure the next time we face a substantial decline in the velocity of broad money like the one that struck in 2008. And if you don't believe that, consider that the Fed's moneyless ("Portfoli-O-Matic") transmission mechanism has already had one "stress test" — the one administered between late 2008 and 2015, which it failed miserably, by proving incapable of transforming $3.5 trillion in fresh reserves into more than a few percentage points of NGDP growth, or far fewer than were required to restore that growth to its pre-crisis path.

If successful monetary control isn't the Fed's first priority, what is? In a word, fatness itself. That is, the Fed likes having a big balance sheet for the same reason that bureaucracies generally like having big budgets to play with. A big budget translates into more generous salaries, lavish facilities, and, other perks. Most importantly, it enhances to the Fed's prestige.

And if you don't think Fed officials care about prestige, you may be entitled to a second dunce cap, because they care very much indeed. According to someone I know who was part of the Fed's deliberations at the time (but who prefers to remain anonymous for now), "the prestige of the central bank" was the answer he was given when he wondered out loud, before a gaggle of top Fed officials in the 1990s, what the Fed had to lose by dispensing with reserve requirements, as central banks in most other advanced economies had already done by then. It was chiefly owing to this desire to maintain its prestige that the Fed sought then, and has sought ever since, to come up with various schemes for making up for the erosion of demand for its liabilities caused by banks' resort to sweep accounts.

Because it allows a central bank to expand its balance sheet arbitrarily without unduly altering its overall monetary policy stance, a floor system is a central bank bureaucrat's dream-come-true. It allows the central bank to vastly increase its size and earnings, ergo its prestige. It also makes it easier than ever for the central bank to effectively buy-off two powerful interests that might otherwise look askance at its aggrandizement, namely, (1) the U.S. Treasury and (2) the banking industry. That the biggest banks and most politically influential banks receive a disproportionate share of the Fed's interest payments only adds to the scheme's overall efficacy.

Since the late 2000s, seigniorage passed along from the Fed to the Treasury has almost tripled in real terms. At the same time, the Fed's expenses, which account for that portion of its earnings that it doesn't pass on to the Treasury, have also grown substantially, mostly owing to its interest payments on bank reserves. According to The Economist, and as can be seen from the chart reproduced from it below, the Fed will pay out $27 billion in interest this year, and is expected to pay out $50 billion in 2019. Once its planned unwind is complete, the Fed expects to continue paying out about $10 billion a year in interest, which is still a tidy bit of baksheesh. 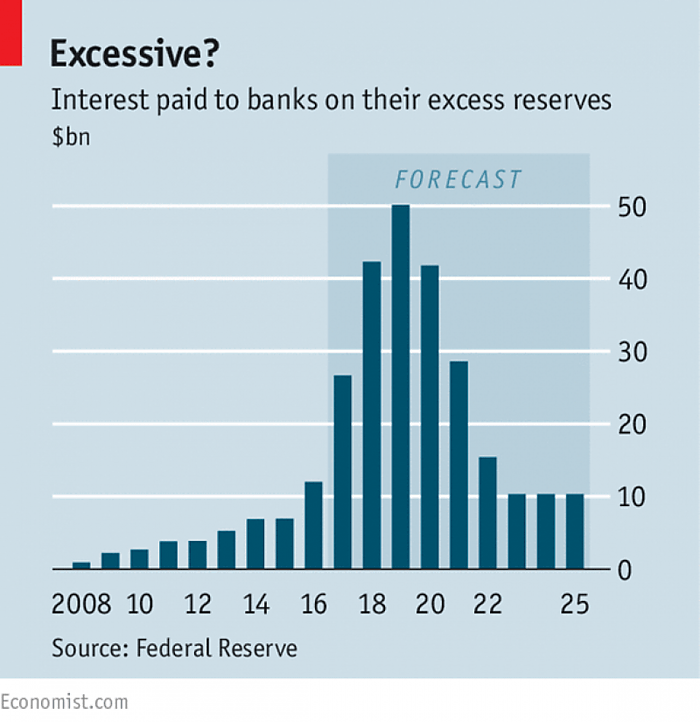 If the Fed's unwinding plan is really based on its determination to maintain its current, bureaucratically advantageous operating system, how did Yellen manage to avoid revealing any hint of this in her recent press conference?  The answer is that she didn't: the hints are there, as they were in some of Yellen's past press conferences. Only the hints were so cleverly ciphered that Yellen could be understood to being saying just the opposite of what she was really saying!

Specifically, in reply to questions about the Fed's future plans for monetary control, Yellen says that the Fed intends to use changes in "the fed funds rate" rather than adjustments to its balance sheet as its chief means of monetary control. This reply could be taken to mean that it won't be engaging again in Quantitative Easing, and that it plans to return eventually to pre-2008 style fed funds rate targeting. The interpretation squares well, after all, with the Fed's claim that it is intent on "normalizing" monetary policy.

But that interpretation is wrong. What Yellen's words really mean is that the Fed plans to keep its current IOER-based operating system going. The changes in the "fed funds rate" to which Yellen refers are really changes to the Fed's IOER and ON-RRP rates, which define the upper and lower bounds, respectively, of the Fed's current fed funds rate "target range." It follows that when Yellen says that the Fed won't be implementing monetary policy by means of balance sheet changes, she doesn't just mean that it will no longer engage in post-2008 style Quantitative Easing. She also means that it won't be making use of conventional (that is, pre-2008 style) open-market operations to influence an otherwise market-determined federal funds rate. All this in turn requires that banks be kept flush with excess reserves, and that the Fed maintain a correspondingly enlarged balance sheet.

How do I know this? Do I have a specially-made Enigma-type machine designed to crack Fed code? I do not. But I have talked to Fed officials, and kept up with Fed publications, and all indications from those support my understanding, as does the theory of bureaucratic behavior to which I referred previously.*

In other words, I might be wrong. But who wants to bet on it?

* For example, the New York Fed just recently published a Liberty Street post defending the Fed's interest payments on required reserves, and promising a follow-up post that will address "the payment of interest on excess reserve balances and discuss some of the benefits to the financial system of operating in a reserve-abundant regime." The lack of any reference to the costs of operating a "reserve-abundant" regime gives the game away.