The Obamacare Giveaway, Connecticut Edition: Earn $62k and Get Health Insurance for less than $58/​Year

Several days ago, I pointed out that a married couple earning $62,000 in Wisconsin could get health insurance under Obamacare with no monthly premiums. Now it’s time to move onto Connecticut. Connecticut runs its own exchange, known as access health CT.

Among the 114,000 individuals aged 55 to 64 in Fairfield County, Connecticut, roughly two-thirds – or 77,000 people – rely on employer coverage, where the odds are high that they’re paying something out of their own pocket for monthly premiums.

Consider married couple earning $62,000. Each is 64-years-old, a non-smoker, and lives in Fairfield County, Connecticut. The structure of Obamacare subsidies means that many individuals who are not poor can find health plans with such large subsidies that they pay virtually nothing for premiums out of their own pocket. In this case, the couple would qualify for the HealthyCT Bronze Basic HSA 1 Plan for $4.79 per month in premium – or $2.40 per month for each person in that household. If the couple chooses this plan, it pays less than 0.1% of its total income towards health care premiums. That’s not a typo – and it doesn’t say one percent – the household would pay one-tenth of one percent of their income towards premiums. Subsidies pay for more than 99% of the monthly premium.

See the graphic below for this married couple: 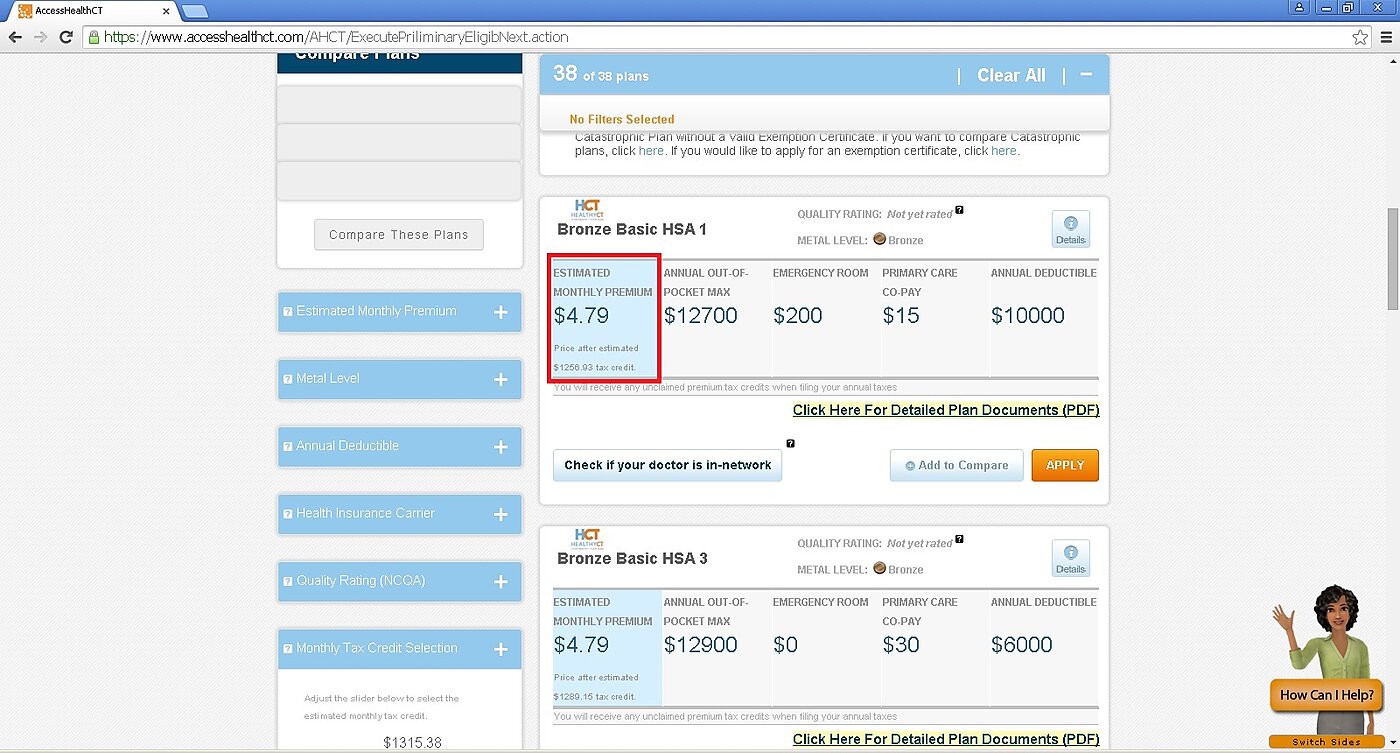 Although plenty of other plans exist – with higher premiums but less cost sharing –  this plan is essentially a giveaway for the near-elderly who didn’t want to purchase coverage, but were mandated to do so by the government.

It is also the case that it is sometimes better to be 64 than 30 in Connecticut. For a couple where both are age 30 (instead of 64), but otherwise identical (earning $62,000, living in the same location, and choose the identical plan), they’d pay $3,441 per year for the same plan or 5.5% of their total income. See the graphic below for this younger couple: 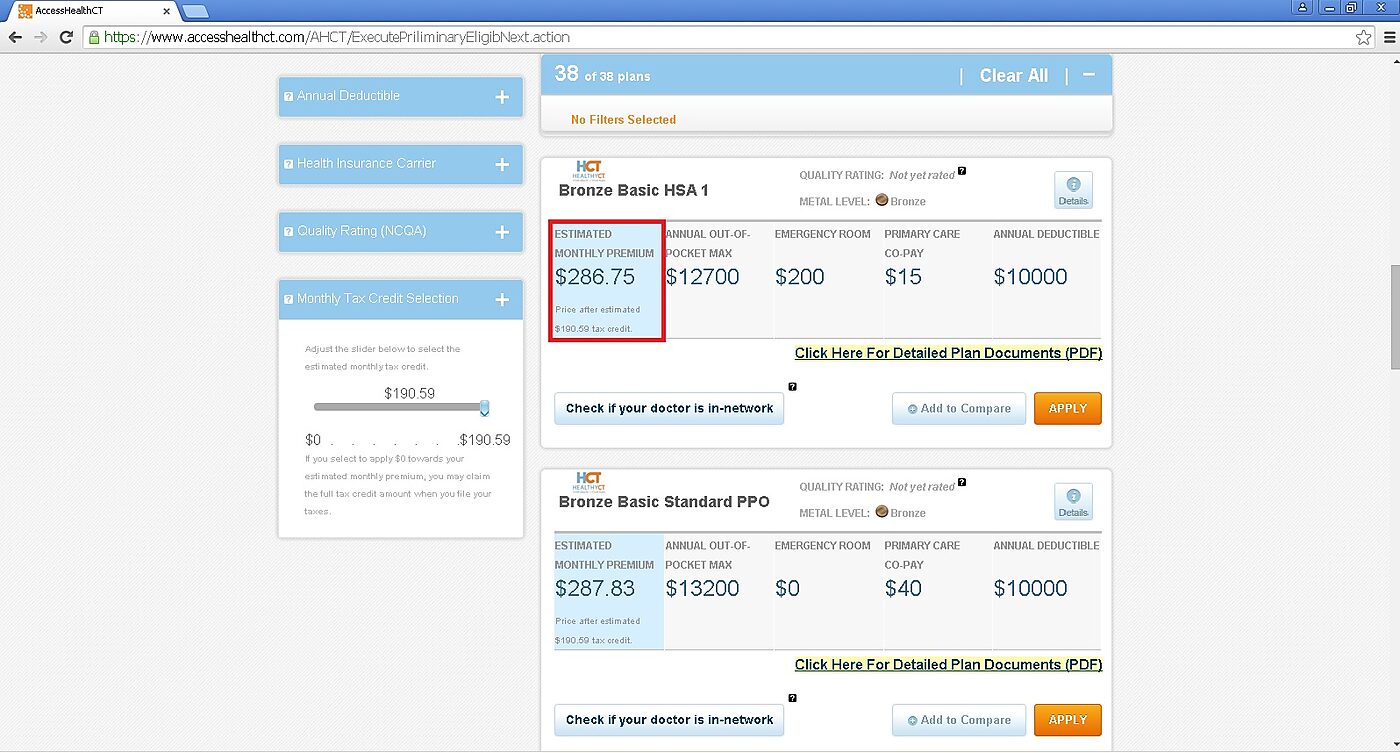 These sorts of findings – both with respect to the relatively high income thresholds where a couple (or individual) gets near-free coverage and where younger people in identical situations pay more for the exact same plan – are a prominent feature in Obamacare, and relates to the unusual structure of the subsidy. As mentioned previously, these findings related to the fact that the subsidy is pegged to the more generous second-lowest-cost silver plan rather than the most efficient plan in terms of premiums.

The Connecticut example presents two public policy lessons. First, it is important to realize just how large the redistribution can be. The near-elderly married couple near 400% of the poverty line pays virtually nothing out of pocket for health insurance premiums in this example. Government reports emphasize affordability (such as noting that 46% of individuals pay less than $600 per year for premiums), but they do not emphasize nearly as much the near-free, giveaway nature that many people face.

Second, it should be noted that the free plans are almost always high deductible plans. If consumers are more careful shoppers of healthcare services when they initially face the actual out-of-pocket cost of those services (such as with these bronze plans until they reach the deductible), this will enhance efficiency. Offsetting this, however, is the fact that some healthcare services can be postponed, and the consumer can migrate later on to more generous plans when they anticipate greater use of the healthcare system. This is discussed in Apostolova and Yelowitz (2015) with respect to Massachusetts health reform in the 2006; they note that women can move in and out of generous health plans easily, which would allow them to purchase more comprehensive coverage when anticipating pregnancy. To the extent that individuals enroll in high deductible plans until they get sick (and then migrate to more generous plans), the efficiency gains under the current Obamacare design are likely to be small.

Aaron Yelowitz is an associate professor in economics at University of Kentucky and a Visiting Scholar at Cato Institute.