No, an Above‐​Average P/E Ratio Does Not Show Stocks Are Overpriced

Writing in The Wall Street Journal on April 27–making another last-ditch pitch for a 20% border tax on business imports–Martin Feldstein asserts that unless corporate tax rate cuts are “offset” by tax increases on imports or payrolls then larger projected deficits would crash the stock market by raising long-term interest rates. “The markets’ current fragility,” he writes, “reflects overpriced assets–the S&P 500 price/earnings ratio is now 70% above its historical average–after a decade of excessively low long-term interest rates engineered by the Federal Reserve.”

The odd notion that the Fed could somehow depress bond yields for a decade is an irrelevant ambiguity, since the whole point of Feldstein’s story is to claim budget deficits raise bond yields and higher bond yields threaten “overpriced” stocks.

Switching from bonds to stocks in this blog, I find no evidence that the S&P 500 stock index is “overpriced” relative to long-term interest rates (which is the only meaning of “overpriced” that relates to Feldstein’s argument about deficits and bond yields).

Feldstein claims stocks are “overpriced” because “the S&P 500 price/earnings ratio is now 70% above its historical average.” But there is no reason to expect the p/e ratio to revert to its long-term average unless bonds yields revert to their long-term average. 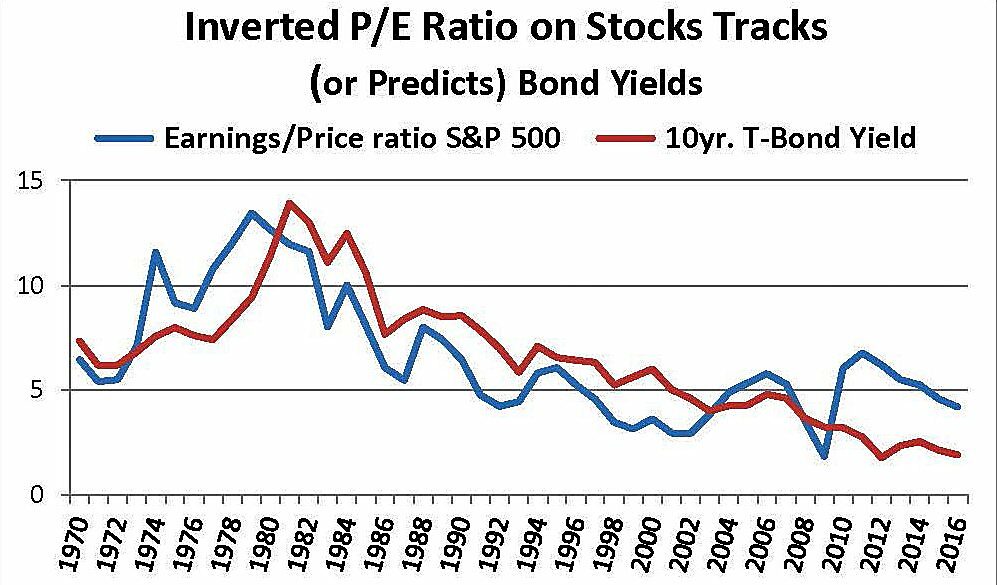 The graph illustrates this connection by inverting the trailing S&P 500 price/earnings ratio and expressing it as an earnings/price ratio. This became known as “The Fed Model,” though I prefer to call it “The Reynolds Model,” because I first used it in March 1991 (to suggest bonds, rather than stocks, were overpriced). From 1970 to 2016, the average e/p ratio was 6.52 (equivalent to a p/e ratio of 15.2) while the average yield on 10-year bond yield was almost identical at 6.57%. That connection between stocks and bonds has been quite close over the long haul (though not before August 1971 when the dollar was convertible into gold).

If bond yields rose to 3.96% (much less to the historical average of 6.57%), that might indeed pose a risk to stocks–unless there was an offsetting rise in expected earnings. However, Feldstein wouldn’t dare to predict that U.S. bond yields may approach 4-7% in the foreseeable future regardless what happens to budget deficits. And his assumed connection between deficits and bond yields is pure conjecture, without credible empirical support.