This week is National School Choice Week, the annual celebration of policies that empower families to choose the education that best meets the individual needs of their children. There have already been several important school choice developments this year, not all of them positive. Below is a roundup of the good, the bad, and the ugly.

It will be hard to top 2015 (the Year of Educational Choice), but 2016 has already seen a flurry of legislative activity. Last week, Florida Governor Rick Scott signed legislation expanding the number of students with special needs who can receive education savings accounts. The bill also renamed the Personal Learning Scholarship Accounts to honor their legislative champion, Senator Andy Gardiner.

The legislation comes on the heels of a large rally at the state capital supporting school choice and calling on the state teachers union to drop its lawsuit against the state's scholarship tax credit law. A judge previously dismissed the suit, but the union has appealed. More than 10,000 protesters attended the rally, which featured Martin Luther King, III:

“I just find it interesting that in our country we have the gall to debate about how our most precious resource — our children — are treated,” [Martin Luther King, III] said.

“My dad, I don’t really know if I can actually speak to what he would speak today, but I can say is that he would always  stand up for justice,” he added. “This is about justice.” 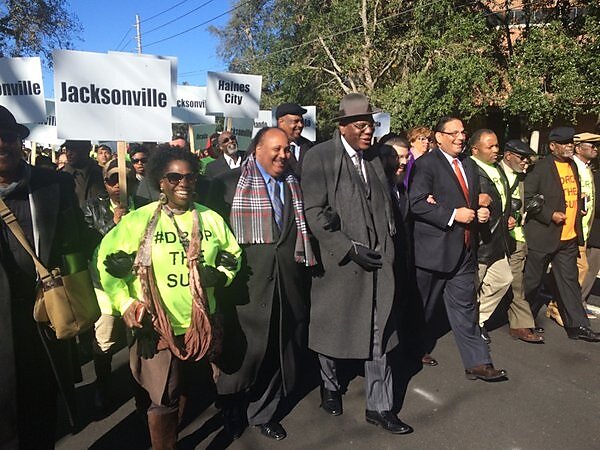 Martin Luther King, III marches in the "Rally in Tally." Image from RedefinED.


Meanwhile, Missouri is considering the nation's first tax-credit-funded ESA, similar to what is proposed in a new Cato Institute report I coauthored with Jonathan Butcher and Clint Bolick of the Goldwater Institute (now Justice Bolick of the Arizona Supreme Court).

Once again, Georgia donors hit the cap on tax-credit-eligible donations to scholarship organizations on the first day. The law only grants $58 million in tax credits, which last year was only enough to provide scholarships to fewer than 13,500 students of Georgia's nearly two million students. The tax-credit scholarships were worth about $3,150 on average, far less than the more than $10,000 per pupil spent on Georgia's district school students according to the most recent NCES data.

The Georgia legislature may consider adopting a second, highly regulated, corporate-donor-only STC, but it would be better to simply raise the total tax credit cap on the existing program.

For several years, the Obama Department of Justice has been investigating Milwaukee's school choice program based on bogus allegations. However, it appears they can no longer keep up the charade:

Parents and advocates of Milwaukee’s storied school voucher program are feeling relief and frustration in learning that the U.S. Department of Justicehas quietly closed a four-year, “legally dubious investigation” into the parental choice program without charges of wrongdoing, according to the head of a school choice advocacy group.

“It was always an unwavering dedication to serving all children with all the resources you have in these (private) schools and knowing that there was no discrimination going on,” said Jim Bender, president of Wisconsin School Choice. “But when you have a long investigation without much information, you get skeptical.

“You are left feeling helpless, especially when you are dealing with the federal Department of Justice and the (Wisconsin) Department of Public Instruction,” said Bender, whose nonprofit organization serves the state’s growing market of educational alternatives to public education.

This is second time in just the last few months that the Obama administration had has to end its legal harrassment of a school choice program. Back in November, the Fifth Circuit Court of Appeals rejected the Obama administration's attempt to exercise control over Louisiana's school voucher program using a decades-old desegregation lawsuit. Writing for the majority, Judge Edith Jones slammed the administration's case as "disingenuous" and "a fishing expedition."

Meanwhile, Nevada's ESA program just had its first legal setback when a judge halted implementation of the program pending litigation:

A state judge Monday put the brakes on Nevada’s education savings accounts, granting an injunction sought by opponents who said it would drain critical funding resources from Nevada’s public schools and is unconstitutional.

District Judge James Wilson, in a 16-page ruling, said the state constitution requires “the legislature to set apart or assign money to be used to fund the operation of the public schools, to the exclusion of all other purposes.”

“Plaintiff parents have met their burden of clearly proving that there is no set of circumstances under which the statute would be valid …” Wilson wrote.

An appeal to the Nevada Supreme Court is anticipated.

The ESA is facing two other legal challenges, including a challenge from the ACLU under the state's historically anti-Catholic Blaine Amendment. Tim Keller of the Institute for Justice explains why the ESA law should pass constitutional muster even if some families use their ESA funds at religious schools:

Yes, parents may voluntarily choose to enroll their children in a religious school — and use the funds deposited in their student's ESA to pay for tuition. Under the terms of the program, the government stays out of each family's educational placement decision. By offering educational benefits on even terms to all families, both religious and nonreligious, the state protects religious liberty.

Moreover, by structuring the ESA program to give families a genuine, independent choice as to how and where they use their ESA funds, the state complies with the plain language of Article 11, Section 10. From the state's perspective, every single dollar is spent for the purpose of educating children. And there is no constitutional bar to using public funds for educational purposes.

In related news, SCOTUS will soon consider a case that may impact whether Blaine Amendments are themselves constitutional. The state of Missouri created a program that gives schools and other organizations recycled tire products to use for children's playgrounds. However, the state excludes religious schools and organizations from participation. The Alliance Defending Freedom challenged the law, arguing that the state must exercise neutrality and may not actively discriminate against religious groups:

“No state can define religious neutrality as treating religious organizations worse than everyone else,” said ADF Senior Counsel David Cortman. “That isn’t neutrality; it’s a hostility to religion that violates the First Amendment. That’s the primary issue that the Supreme Court will address. In this case, the state should not have excluded this preschool from the recycled tire program simply because a church operates the school.”

“Children’s safety is just as important on church daycare playgrounds as it is on other daycare playgrounds,” added ADF Senior Counsel Erik Stanley. “Missouri and every state should understand that the U.S. Constitution prohibits religious hostility, which is what Missouri exhibited when it denied Trinity Lutheran’s scrap tire grant application. This case has huge implications for state constitutional provisions across the nation that treat religious Americans and organizations as inferiors solely because of their religious identity.”

A victory for the plaintiffs would call into question whether Blaine Amendments are constitutional under the First Amendment.

In 2014, New Hampshire's scholarship tax credit law survived a Blaine Amendment challenge in the state supreme court. You can learn more about how educational choice benefits students — and how defenders of the status quo are attempting to use Blaine Amendments to deprive families of that choice — in the Cato Institute’s short documentary, “Live Free and Learn”: