The Narrow Bank: A Follow‐​Up

In my last post I wrote about the lawsuit TNB USA Inc has filed against the New York Fed, which has refused to grant the would-be bank a Master Account. I argued that, despite its name (TNB stands for "The Narrow Bank"), and despite what some commentators (now including, alas, The Wall Street Journal's editorial staff) seem to think, TNB isn't meant to supply ordinary persons with a safer alternative to deposits at ordinary banks. Instead, TNB's purpose is to receive deposits from non-bank financial institutions only, to allow them to take advantage, indirectly, of the Fed's policy of paying interest on bank reserves — thereby potentially earning more than they might either by investing directly in securities or by taking advantage of the Fed's reverse repo program, which is open to them but which presently offers a rate 20 basis points lower than the Fed's IOER rate.

Yet for all the controversy TNB's lawsuit has generated, its outcome may no longer matter as much as it might once have. For one thing, TNB's success can no longer undermine the Fed's ON-RRP program, which is designed to implement the Fed's target interest rate lower bound, for the simple reason that that program is already moribund. Commenting on my post, J.P. Koning observed that, while the Fed's ON-RRP facility, first established in December 2013, once supplied non-bank financial institutions with an attractive investment alternative, it ceased being so this year. As the chart below, reproduced from J.P.'s comment, shows, the facility — which once accommodated hundreds of billions of dollars in bids — is now completely inactive: 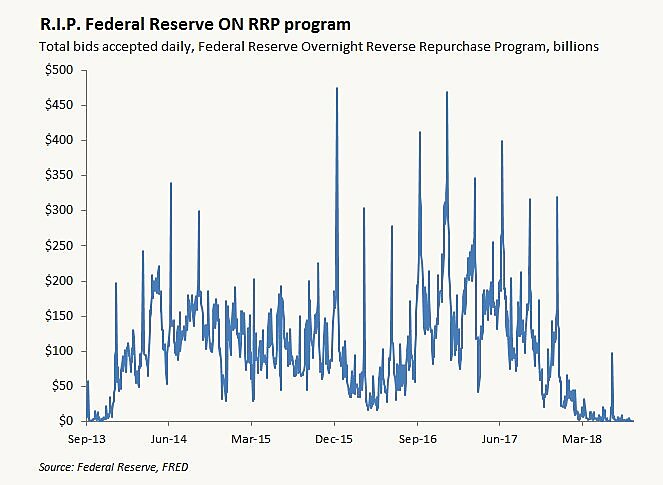 The decline on ON-RRP activity since the beginning of this year is a byproduct of the general increase in market rates of interest, both absolutely and relative to the Fed's ON-RRP offer rate, that has made the program both less attractive to potential participants and unnecessary as a means for establishing a lower-bound for the effective fed funds rate. But that decline is but one symptom of a more general development, to wit: the tendency of the Fed's policy rate settings to lag further and further behind increases in market-determined interest rates, thanks in no small part to the Trump administration's fiscal profligacy. Here, for example, is a FRED chart comparing the Fed's policy rate settings to the yield on 1-month Treasury bills:

In the figure the "Lower Limit" of the Fed's federal funds target range is also the Fed's ON-RRP facility offer rate, while the "Upper Limit" is the same as the Fed's IOER rate until mid-June 2018, and 5 basis points above the IOER rate afterwards.

Although an overnight repurchase agreement is a more liquid investment than a one-month Treasury bill, its easy to appreciate how that difference ceased, in the last year or so, to compensate for the gap between the ON-RRP rate and other money market rates. But those rates have also increased relative to the IOER rate, with the Fed's June decision to reduce the IOER – ON-RRP rate spread from 25 to 20 basis points, reducing the attractiveness of IOER relative to money market rates by another 5 bps. Consequently, bank reserves are also much less attractive relative to money market instruments, and especially to shorter-term Treasury bills, than they were a year ago.

All of which means that TNB's efforts could end up being in vain even if the Fed ends up granting it an account. As J.P. Koning points out in his own post concerning the TNB case, "even if TNB succeeds in its lawsuit, there is a larger threat. The gap the bank is trying to exploit is shrinking." In contrast, when the TNB plan was originally developed in 2016, that gap was about 25 basis points.

It's possible, of course, that future changes will see the IOER rate ruling the interest-rate roost once again, instead of becoming a bit player, in the future. But until that happens TNB USA Inc. may find landing customers just as difficult as landing a Master Account.

Whither the Floor System?

Although rising market rates may cause TNB's efforts to come to naught, that possibility should not offer Fed officials much comfort, for the tendency for those rates to outpace its own policy rate settings poses no less a threat to its own operating framework than it does to TNB's business plan.

That operating framework, called a "floor" system, depends on banks' willingness to hoard reserves, so that changes in the amount of reserves in the banking system, instead of causing banks to increase their lending — thereby putting downward pressure on market interest rates — lead to like changes in banks' excess reserve holdings. The Fed is then able, in principle, to expand or shrink its balance sheet without altering the stance of monetary policy. Instead of depending on the quantity of reserves the Fed creates, that stance will depend mainly on the interest rate the Fed pays on excess reserves, or the IOER rate, for short.

If, on the other hand, excess reserves cease to be attractive relative to other assets banks might acquire, those banks will no longer be inclined to hold substantial quantities of excess reserves. Instead, they'll exchange them for other assets, and Treasury securities especially, since such securities are just as useful as reserves when it comes to meeting Basel III's Liquidity Coverage Ratio rules. The Federal Home Loan Banks, on the other hand, are increasingly inclined to offer their surplus Fed balances on the private repo market instead of lending them to banks in return for a piece of the IOER pie. Eventually, either Treasury yields and private-market repo rates must decline enough, relative to the IOER rate, to make reserve hoarding attractive once again, or the passing of the reserve balance "hot potato" must eventually raise the quantity of bank deposits enough to convert unwanted excess reserves into required reserves.

Prior to October 2008, when the Fed first put its floor system in place, the "hot potato" effect had been the norm: bank reserves paid no interest at all, while even one-month Treasury bills yielded over 2 percent. Consequently, banks held only trivial amounts of excess reserves, disposing of the rest first in the fed funds market but ultimately by acquiring other assets until deposit expansion eliminated any surplus reserves. Monetary policy in turn meant  adjusting the quantity of reserves to keep the Fed's policy rate on target.

A look at the next chart suggests why the same money market developments that might render TNB's efforts nugatory also threaten to cause the Fed's floor system to unravel. The chart's red line shows the spread between the yield on 1-month Treasuries and the IOER rate (left scale), while its blue line shows the banking system's ratio of excess reserves to total deposits (right scale).

Until October 2008, with IOER = 0, a very high Treasury-IOER spread kept excess reserves at a minimum. Afterwards, in contrast, a negative spread encouraged banks to accumulate trillions in excess reserves instead of using those reserves to support a proportional increase in deposits. But lately the Treasury-IOER rate has been back in positive territory. (Indeed, the last observations for the red line should be 5 bps higher than what's shown, because in June the Fed established a 5 bps difference between its target rate "upper limit," used in the chart as a proxy for the IOER rate, and the IOER rate itself.) As the chart also shows, banks have responded accordingly, by reducing their excess reserve holdings relative to their total deposits.

In conclusion, while the Fed may succeed in fending-off TNB's attempts to give non-bank financial institutions' access to IOER, it may find preserving its IOER-based operating system much harder. What's more, if you ask me, the Fed's attempts to preserve that operating system, by abandoning its plan to shrink its balance sheet or by resorting to more aggressive IOER rate increases, could ultimately do all of us a lot more harm than its treatment of TNB.