In today’s Dallas Morning News, I have an op-ed that discusses a riddle of American immigration policy right now:

The economy is roaring, and wages are rising, yet 2017 was another year of virtually no illegal border crossings. On average, each Border Patrol agent apprehended just 16 people all year—one every three weeks, tied for the lowest rate since World War II. This is down from when Border Patrol agents apprehended an average of 261 crossers per agent in 1996.

How is this possible?

Newly released statistics from the Department of State give a plausible answer. They haven’t disappeared: they’ve become legal. . . . From 1996 to 2017, the number of temporary visas issued to seasonal workers on farms and other industries increased tenfold, from 23,204 to 236,695.

The figure below graphs these trends. As you can see, the housing bubble bursting briefly resulted in a crash in both legal entries and illegal entries, but as the economy has come back, the legal entries have soared, while the illegal ones have remained low.

Guest Workers and Apprehensions of Illegal Border Crossers Per Border Patrol Agent, 1996 to 2017 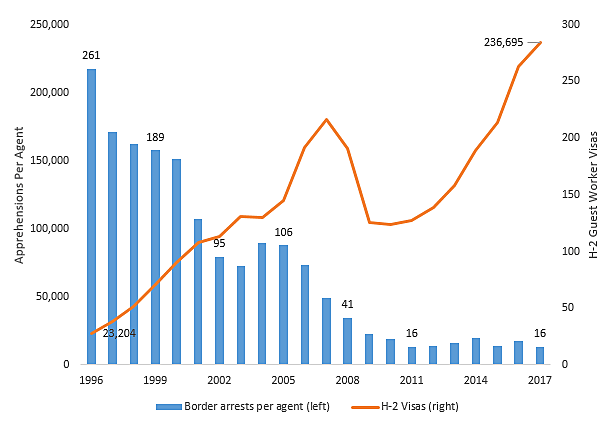 Congress should consider expanding and improving these guest worker programs. One proposal by Rep. Dan Newhouse (R-WA) would allow more H-2A guest workers to enter as farm workers, even if the job was year-round. This would benefit dairies, livestock, and other farms that currently have access to no temporary worker program. This proposal has already been included in the Department of Homeland Security appropriations bill in the House, which means that, if GOP leadership follows normal process, it should be included in the spending bill set to be voted on this month.

Another idea, which was included in last year's spending bill, would allow H-2B workers for non-agricultural industries not to be counted against the H-2B quota if they had entered legally and returned home in the prior three years. Rep. Andy Harris (R-MD) is reportedly negotiating with House GOP leadership to have it inserted into the spending package. His idea makes sense. Congress should reward workers and employers that follow the rules, and more guest workers would be a huge benefit to both the economy and American security.

You can read my entire op-ed here.