President Trump’s Policies Did Not Suppress Border Crossings in 2017

In his State of the Union speech, President Trump failed to mention one important phenomenon that occurred under his watch last year. Except for one other year, 2017 saw the fewest illegal border crossings since World War II. While he has often bragged about this in other settings, it is possible that his advisors left it out of his speech because it clearly downplays any urgency to build a massive wall or send in reinforcements for Border Patrol.

In any case, he was right not to brag about it: 98.8 percent of the decline in illegal entries from 1986 to 2017 occurred entirely before Trump's inauguration. While his year in office has continued a preexisting downward trend, his campaign rhetoric appears to have caused a pre-inauguration surge in arrivals. His overall effect is essentially zero.

Figure 1 shows the number of apprehension per Border Patrol agent from the 1920s through the end of Fiscal Year 2017 (September 2017). As it shows, illegal entries were a significant issue in the early 1950s and again from 1970 to 2000, but since 2001, and particularly since 2009, illegal immigration has slowed to trickle. In 1986, each Border Patrol agent apprehended nearly 530 people—44 people per month. By the end of 2017, that number had dropped to just 16, barely more than one arrest for each per month. 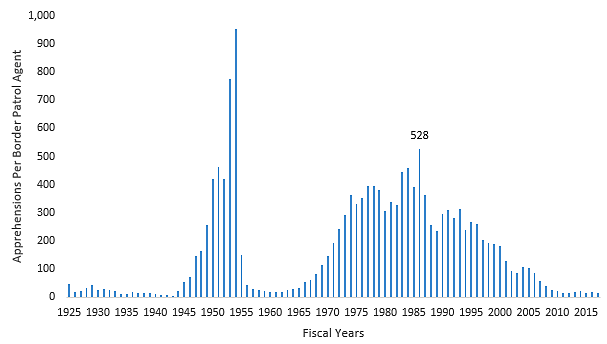 Zooming in on just the last 17 years of monthly apprehension data shows that illegal immigration is currently slightly above the downward exponential trend line (the trend is the dotted red line in Figure 2). President Trump can only claim at most the trend continued during his time in office. 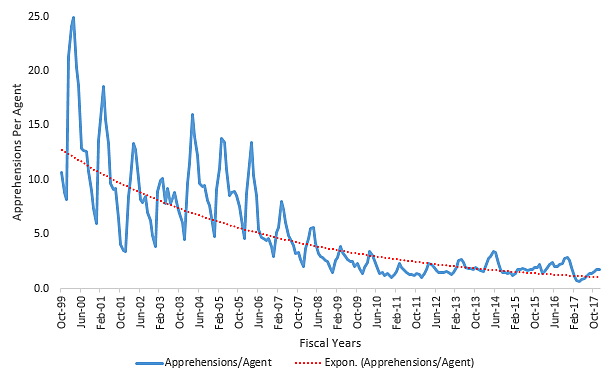 Focusing on only the Obama and Trump months in office does reveal some interesting anomalies (Figure 3). Every year prior to FY 2016 going back to at least 2000, flows peaked in the spring and fell through the fall and winter. In the fall of 2015, however, as Trump rose to the top spot among Republican presidential contenders, the flow continued and peaked in December. In 2016, the flow had its usual spring surge, but then after the GOP officially nominated him, border crossers responded with an uncharacteristic winter rush. 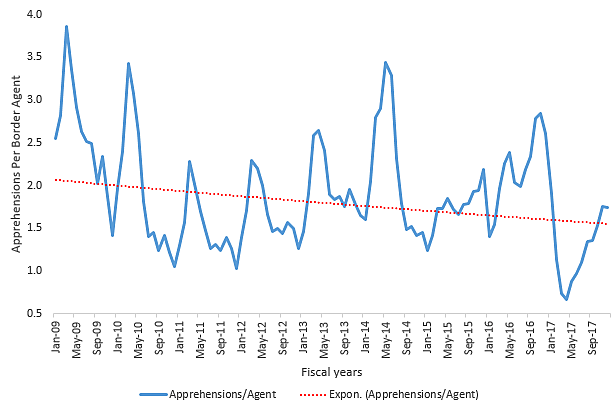 Clearly, the fear that the Trump administration would make changes incentivized a pre-inauguration increase in illegal immigration. Immigrants moved up their travel plans and left before he assumed office. This resulted in a post-inauguration decrease in illegal immigration. Back in August when I first proposed this theory with data only through June 2017, I hypothesized that if it were true, the apprehensions would return to trend by the end of the year. As Figure 3 shows, they have.

In other words, President Trump has had zero effect on net illegal immigration. His campaign rhetoric caused a pre-inauguration boom and post-inauguration bust, but his overall impact has not affected the trend at all. The decades-long downward movement in apprehensions has continued, but President Trump’s policies have had nothing to do with it.

Even if his current policies did matter, however, it would demonstrate that Border Patrol can effectively manage illegal immigration without an unnecessary, wasteful monstrosity spanning 2,000 miles of the U.S.-Mexico border.