I wrote last week about Paul Krugman's claim that “there basically aren’t any libertarians" because “There ought in principle, you might think, be people who are pro-gay-marriage and civil rights in general, but opposed to government retirement and health care programs — that is, libertarians — but there are actually very few.” I offered some evidence from Gallup, Pew, and other polls that in fact there are substantial numbers of voters who hold libertarian-ish views on both economic and social issues.

Bryan Caplan runs some regressions to find that voters' positions on a variety of issues don't line up the way Krugman assumes they do. Ilya Somin explores various problems with Krugman's claims, including this:

It’s also possible to try to justify Krugman’s claim by arguing that most of those people who hold seemingly libertarian views haven’t thought carefully about their implications and are not completely consistent in their beliefs. This is likely true. But it is also true of most conservatives and liberals. Political ignorance and irrationality are very common across the political spectrum and only a small minority of voters think carefully about their views and make a systematic attempt at consistency. Libertarian-leaning voters are not an exception to this trend. But it is worth noting that, controlling for other variables, increasing political knowledge tends to make people more libertarian in their views than they would be otherwise.

If Krugman is right, you should see few Americans who are in favor of same-sex marriage but oppose government efforts to reduce income inequality, or vice versa.

As it turns out, however, there are quite a number of them; about 4 in 10 Americans have “inconsistent” views on these issues.

Not actually inconsistent, of course, just not consistently "liberal" or "conservative." Those "inconsistent" Americans just might be consistently libertarian or anti-libertarian. Silver has a nice matrix, grounded in data from the General Social Survey unlike Krugman's off-the-cuff matrix: 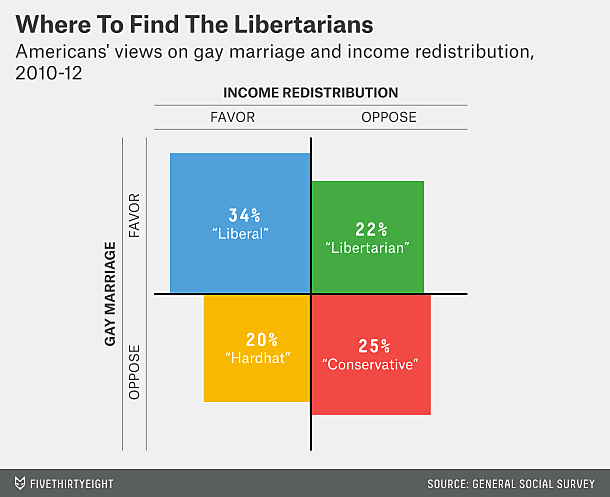 On those two issues, the largest group take liberal positions on both. Substitute different issues -- cutting taxes, say, or internet censorship -- and you'd get larger numbers of libertarians. But whatever set of issues you choose, you're likely going to find significant numbers of voters taking positions that don't fit into Krugman's two boxes.

Silver speculates on why there seems to be so little political representation for these large groups of voters:

...the hard-core partisans who vote in presidential primaries are much more likely to take consistently liberal or conservative positions than the broader American population, as Krugman’s colleague Nate Cohn points out.

And the parties themselves — who have disproportionate influence in the primaries — have highly partisan views by definition. Almost all voting in the U.S. Congress, on social issues and economic issues alike, can be reduced to a single, left-right dimension.

Does this make any sense? Why should views on (for example) gay marriage, taxation, and U.S. policy toward Iran have much of anything to do with one another? The answer is that it suits the Democratic Party and Republican Party’s mutual best interest to articulate clear and opposing positions on these issues and to present their platforms as being intellectually coherent. The two-party system can come under threat (as it potentially now is in the United Kingdom) when views on important issues cut across party lines.

Maybe that's why we have so much trouble convincing people that there are libertarian voters.

Nate Silver looked at growing libertarian sentiment back in 2011.