COVID-19 is wreaking havoc on American jobs. State shutdowns and social distancing have resulted in 26 million people being laid off and furloughed.

Policymakers in some states are starting to loosen business restrictions and are hoping for a strong jobs recovery. But a quick rebound in jobs will be undermined by government policies. The federal government has expanded unemployment benefits, which will discourage job seeking.

And many state governments impose high minimum wages that will deter cash‐​strapped businesses from hiring. The federal minimum wage is $7.25 per hour, but 29 states impose higher minimums. Some cities have even higher wage floors, such as New York City at $15 per hour.

Ryan Bourne and I examine the economic crisis and minimum wages in a new op‐​ed at The Hill.

The chart below shows the per‐​hour minimum wage rates by state. The rate is either the federal rate or the state rate if it is higher than the federal one, which is the case in 29 states.

State and local policymakers should revisit their recent and scheduled minimum wage increases because the mandates will kill job opportunities as the economy struggles to rebound. News reports indicate a rethinking of scheduled increases in some places. 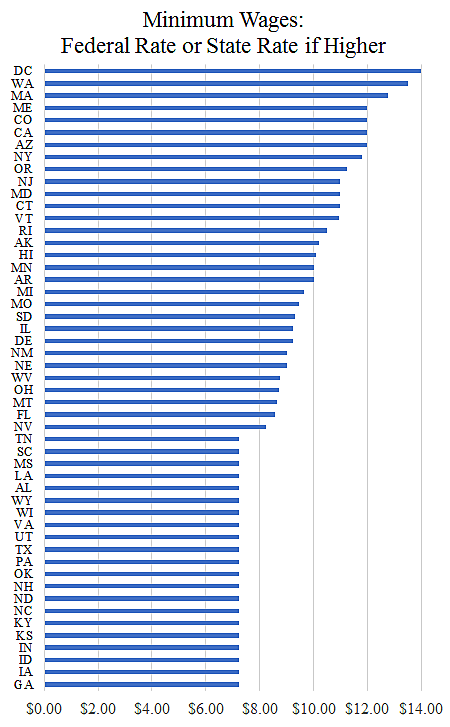