R. Evan Scharf Chair for the Public Understanding of Economics

Ryan Bourne occupies the R. Evan Scharf Chair for the Public Understanding of Economics at Cato. He has written on a number of economic issues, including: fiscal policy, inequality, minimum wages, infrastructure spending and rent control. Before joining Cato, Bourne was Head of Public Policy at the Institute of Economic Affairs and Head of Economic Research at the Centre for Policy Studies (both in the UK). Bourne has extensive broadcast and print media experience, and has appeared on BBC News, CNN and Sky News, CNBC, and Fox Business Network. He writes weekly columns for the Daily Telegraph and a fortnightly column for the UK website ConservativeHome. Bourne holds a BA and an MPhil in economics from the University of Cambridge, United Kingdom. 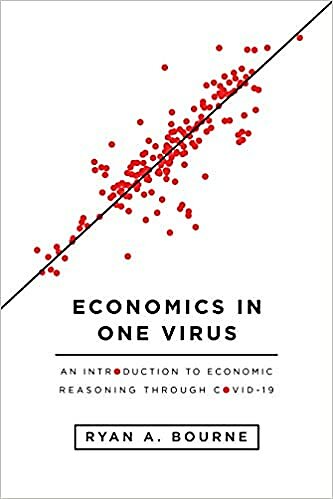 Economics in One Virus: An Introduction to Economic Reasoning through COVID-19

Economics in One Virus draws on the dramatic events of 2020 to bring to life some of the most important principles of economic thought. Packed with supporting data and the best new academic evidence, those uninitiated in economics will be given a crash‐​course in the subject through the applied case‐​study of the COVID-19 pandemic, to help explain everything from why the U.S. was underprepared for the pandemic to how economists go about valuing the lives saved from lockdowns.