Is the Libertarian Moment Over?

That's the question Dave Weigel asks at the Washington Post. His premise is that Rand Paul's presidential campaign seems to have slowed down, so maybe that means any "libertarian moment" has passed. (I'd say Weigel asks, but doesn't answer, the question.)

Nick Gillespie of Reason correctly tells Weigel that ideological movements and moments aren't tied to any one political leader: “It’s a mistake to conflate Rand Paul’s electoral success with that of the libertarian moment."

Gillespie also says Paul would be more successful if he were more libertarian:

“Rand Paul’s high visibility is better understood as a consequence of the libertarian moment than its cause. There’s a reason why he’s been at his most electrifying and popular precisely when he is at his most libertarian: calling out the surveillance state, for instance, and leading the charge against reckless interventions in Syria and Libya.”...

“Hopefully his father’s endorsement will goad him to become THE libertarian alternative,” says Gillespie, “rather than the seventh or eighth or 10th most conservative candidate in the GOP race.”

And of course the election is just beginning. The Donald Trump circus has dominated the past month, but eventually the differences between serious candidates such as Bush, Walker, and Paul will get more attention. And in that competition Paul's "libertarianish" approach will stand out against a dozen candidates racing to the right.

Weigel isn't the first to raise the question of whether the rise of ISIS, with its brutal videos, set back a rising tide of non-interventionist sentiment among American voters. As I told Weigel, “I still think the growing aversion to intervention will reassert itself reasonably soon.” The temporary success of ISIS won't wipe out 15 years of war-weariness. As soon as February, when the voting starts, voters may be reverting to their skepticism about intervention.

Ed Crane has written, in the Wall Street Journal and elsewhere, that a plurality of Americans support free enterprise, social tolerance, and "a healthy skepticism of foreign military adventurism." David Brooks wrote recently that the swing voters in 2016 will be people who don't think big government is the path to economic growth and don't know why a presidential candidate would open his campaign at Jerry Falwell's university. Those are the voters who push American politics in a libertarian direction.
You can see that libertarian direction in this chart put together by David Bier, who elaborated on what it shows here: 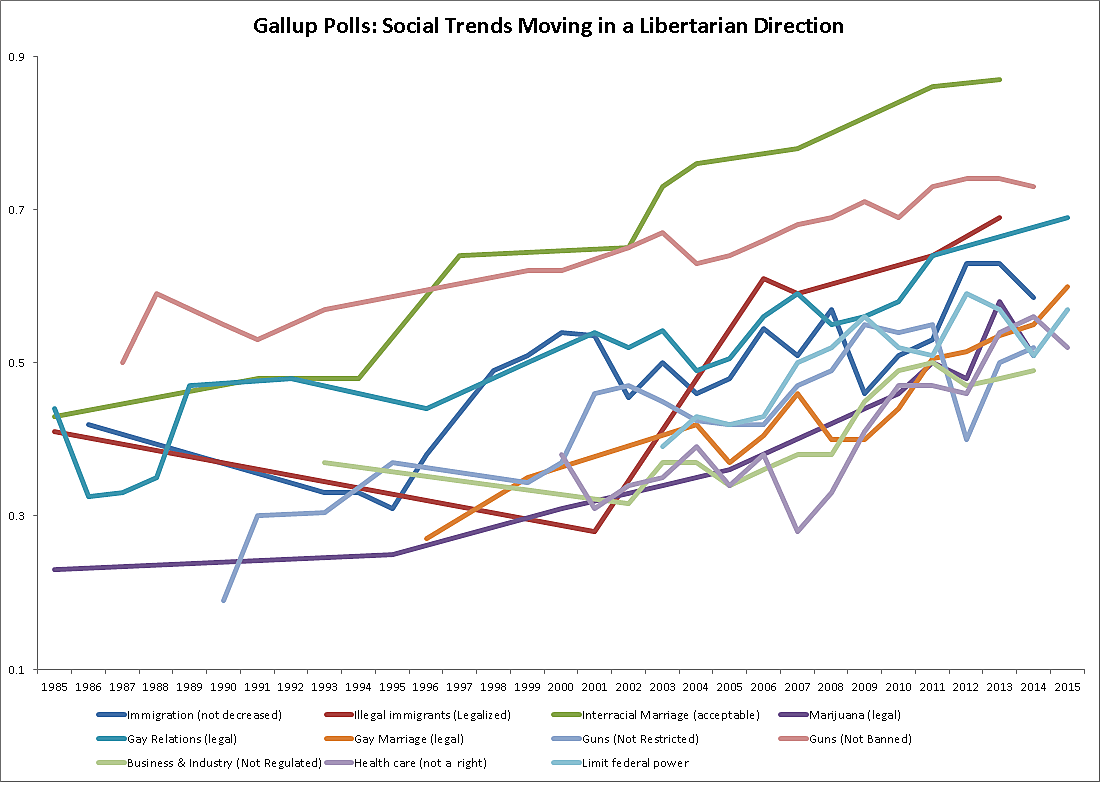 In any case, we shouldn’t judge freedom by what politicians and voters are doing in any particular year. We live in a world where we have extended the promises of the Declaration of Independence to more people -- gay people can get married! – where we have all the knowledge in the history of the world in our pockets, where politicians and police are increasingly monitored, where unregulated or lightly regulated technologies are challenging comfortable monopolies.
Nick Gillespie and Matt Welch have taken the idea of "the libertarian moment" far beyond politics and elections, as in this article that I quoted in the introduction to The Libertarian Reader:

We are in fact living at the cusp of what should be called the Libertarian Moment, the dawning not of some fabled, clichéd, and loosey-goosey Age of Aquarius but a time of increasingly hyper-individualized, hyper-expanded choice over every aspect of our lives, from 401(k)s to hot and cold running coffee drinks, from life-saving pharmaceuticals to online dating services. This is now a world where it’s more possible than ever to live your life on your own terms; it’s an early rough draft version of the libertarian philosopher Robert Nozick’s glimmering “utopia of utopias.” Due to exponential advances in technology, broad-based increases in wealth, the ongoing networking of the world via trade and culture, and the decline of both state and private institutions of repression, never before has it been easier for more individuals to chart their own course and steer their lives by the stars as they see the sky....
This new century of the individual, which makes the Me Decade look positively communitarian in comparison, will have far-reaching implications wherever individuals swarm together in commerce, culture, or politics....
The Internet alone has created entire new economies, modes of scattered and decentralized organization and work, and a hyper-individualization that would have shocked the Founding Fathers.

And of course if we move beyond the United States to the world, it's pretty clear that the large trends in the world -- not without counter-trends -- are toward human rights, women's rights, gay rights, democratic governance, and freer markets. If we're not quite in a libertarian moment, we're in a libertarianish era.