Philip Rucker writes in the Washington Post that presidential hopefuls Sen. Marco Rubio and Sen. Rand Paul “clashed sharply Friday over President Obama’s new Cuba policy, evidence of a growing GOP rift over foreign affairs that could shape the party’s 2016 presidential primaries.” The debate over U.S. foreign policy is often inflicted with false claims of “isolationism,” but in this instance Paul correctly called out Rubio as “acting like an isolationist who wants to retreat to our borders and perhaps build a moat.”

Rucker notes that “the emerging, younger libertarian wing [of the GOP] represented by Paul” may want a different foreign policy from that established by George W. Bush. Neoconservatives and allies of other Republican presidential candidates insist that Republicans have no intention of rethinking the policy of promiscuous interventionism.

Bill Kristol of the Weekly Standard tells Rucker that Sen. Rand Paul is “a lonely gadfly” on foreign policy:

“Rand Paul speaks for a genuine sentiment that’s always been in the Republican Party, but maybe it’s 10 percent? 15 percent? 20 percent? I don’t think he’s going to be a serious competitor for guiding Republican foreign policy.”

Well, let's go to the tape. Kristol may need to read some polls. Here's a CBS News/New York Times poll from June:

Americans, including Republicans, are getting tired of policing the world with endless wars.

As neoconservatives and Republican senators beat the drums for military action in Syria, Republicans turned sharply against the idea —  70 percent against in September 2013.

Perhaps most broadly, a massive Pew Research Center survey in December 2013 found that 52 percent of respondents said the United States "should mind its own business internationally and let other countries get along the best they can on their own." That was the most lopsided balance in favor of the U.S. "minding its own business" in the nearly 50-year history of the measure. 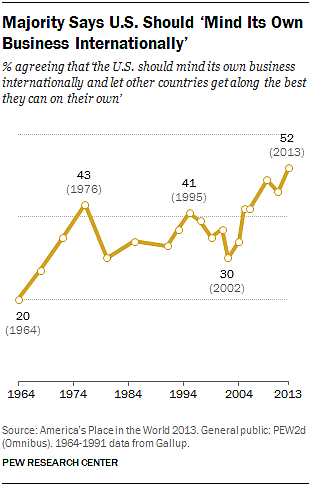 And then there was the YouGov poll in March that showed that "the American public has little appetite for any involvement in Ukraine....Only 18% say that the US has any responsibility to protect Ukraine." Republicans were barely more supportive: 28 percent yes, 46 percent no.

Janet Hook of the Wall Street Journal reported on that paper's poll in April:

Americans in large numbers want the U.S. to reduce its role in world affairs even as a showdown with Russia over Ukraine preoccupies Washington, a Wall Street Journal/NBC News poll finds.

In a marked change from past decades, nearly half of those surveyed want the U.S. to be less active on the global stage, with fewer than one‐​fifth calling for more active engagement — an anti‐​interventionist current that sweeps across party lines.

…The poll findings, combined with the results of prior Journal/​NBC surveys this year, portray a public weary of foreign entanglements and disenchanted with a U.S. economic system that many believe is stacked against them. The 47% of respondents who called for a less‐​active role in world affairs marked a larger share than in similar polling in 2001, 1997 and 1995.

Americans, including Republicans, are getting tired of policing the world with endless wars. Support for the Iraq war is almost as low as approval of Congress. Interventionist sentiment ticked up in the summer of 2014 as Americans saw ISIS beheading journalists and aid workers on video. But even then most voters wanted air strikes, not more troops. Here’s a prediction: 13 months from now, when the voters of Iowa and New Hampshire begin voting for presidential candidates, Americans will be even more weary of nearly 15 years of war, and U.S. intervention will be even less popular than it is now. If it remains the case then, as Kristol says it is now, that the other presidential candidates are “all in the same neighborhood” on interventionism and Paul is the only candidate calling for restraint, then don’t bet against him in Iowa and New Hampshire.

Of course, foreign policy isn’t often a priority for voters, and Paul has other pluses and minuses that will affect voters’ decisions. But after 15 years of war, being the only Republican who wants to avoid further military entanglements looks like a good position.

Next Generation Foreign Policy: Time for the Democrats to Embrace Restraint

The Problem with Sanctions: Feel Good Versus Effective Policy