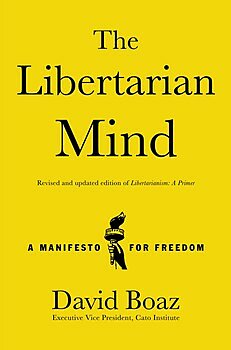 I’m delighted to announce that my new book, The Libertarian Mind: A Manifesto for Freedom, goes on sale today. Published by Simon & Schuster, it should be available at all fine bookstores and online book services.


I’ve tried to write a book for several audiences: for libertarians who want to deepen their understanding of libertarian ideas; for people who want to give friends and family a comprehensive but readable introduction; and for the millions of Americans who hold fiscally responsible, socially tolerant views and are looking for a political perspective that makes sense.


The Libertarian Mind covers the intellectual history of classical liberal and libertarian ideas, along with such key themes as individualism, individual rights, pluralism, spontaneous order, law, civil society, and the market process. There’s a chapter of applied public choice (“What Big Government Is All About”), and a chapter on contemporary policy issues. I write about restoring economic growth, inequality, poverty, health care, entitlements, education, the environment, foreign policy, and civil liberties, along with such current hot topics as libertarian views of Bush and Obama; America’s libertarian heritage as described by leading political scientists; American distrust of government; overcriminalization; and cronyism, lobbying, the parasite economy, and the wealth of Washington.


The publisher is delighted to have this blurb from Senator Rand Paul:

I am just as happy to have high praise from legal scholar Richard Epstein:

“In an age in which the end of big government is used by politicians as a pretext for bigger, and worse, government, it is refreshing to find a readable and informative account of the basic principles of libertarian thought written by someone steeped in all aspects of the tradition. David Boaz’s Libertarian Mind unites history, philosophy, economics and law—spiced with just the right anecdotes—to bring alive a vital tradition of American political thought that deserves to be honored today in deed as well as in word.”