Large Majorities Support Key Obamacare Provisions, Unless They Cost Something

A new Washington Post/ABC News poll finds that Americans say they support Affordable Care Act regulations that require health insurance companies in all states to cover a particular set of services (62%) and prohibit insurers in all states from charging higher prices to people with pre-existing conditions (70%).

However, the poll did not find out what Americans would be willing to give up to obtain these regulatory benefits.

Fortunately, a recent Cato Institute/YouGov health care survey investigated how Americans make trade-offs when it comes to their health care. In short, support for once popular regulations plummets as soon as voters consider their costs.

At first, and similar to the Washington Post/ABC poll, the Cato survey found by a margin of 63% to 33% Americans support prohibiting insurance companies from charging higher premiums because of pre-existing conditions—also known as “community rating.” But support flips, and majorities come to oppose community rating… 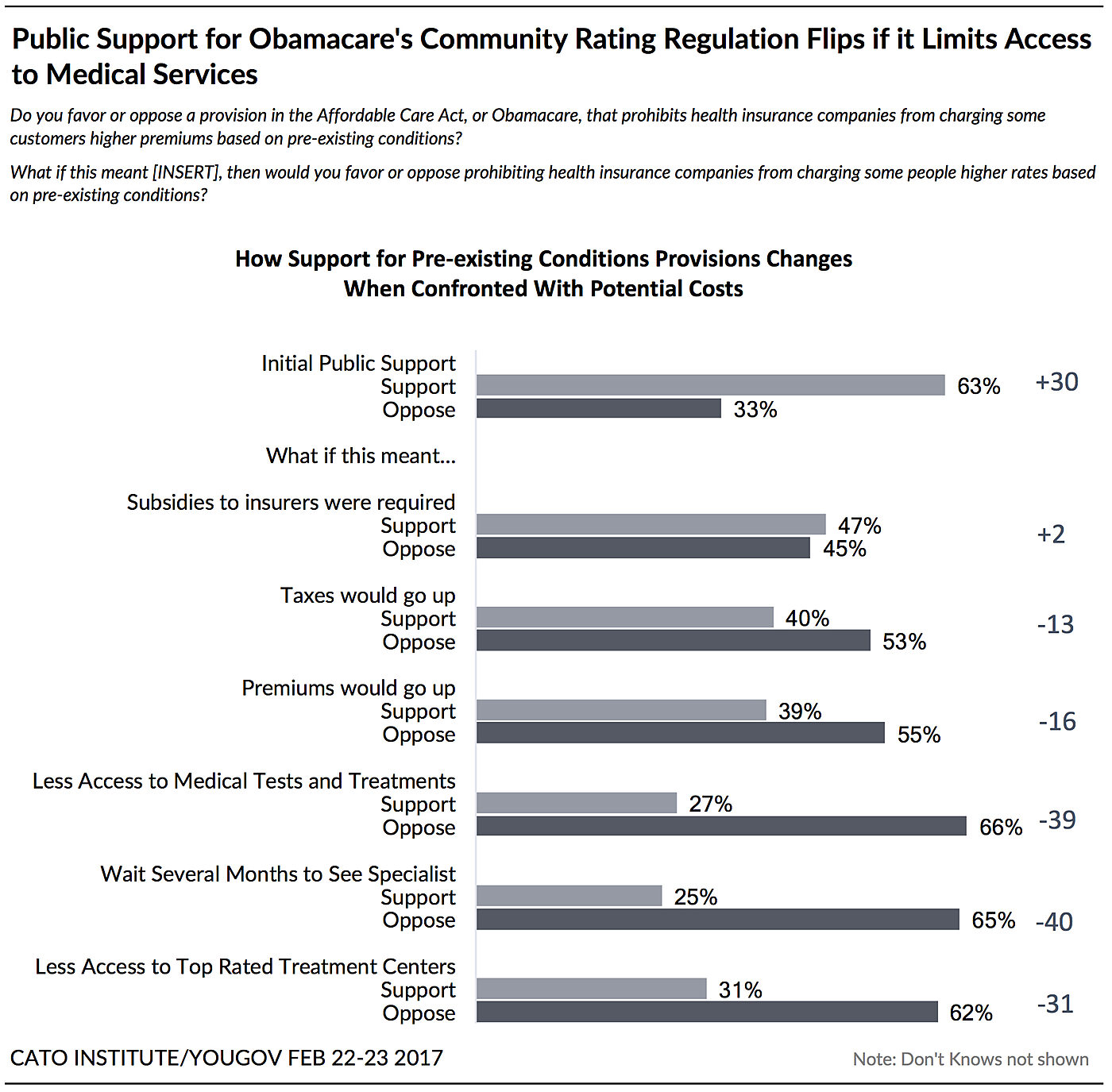 The Cato Institute survey found the same pattern for a nationwide standard requiring insurers offer coverage to people with pre-existing conditions (guaranteed issue). Americans support it if it's free, but oppose it if it costs them higher premiums but particularly if it harms the quality of health care.

While it is well known that premiums are rising, and nearly a third of health insurers have abandoned the exchanges—many do not know how ACA regulations are harming the quality of health care in the U.S.

Academic research shows that these regulations are harming the availability of health services and access to top hospitals, surgeons, and doctors—particularly for the most vulnerable Americans. Why? Economists find that in order to comply with costly rules like community rating and guaranteed issue, health insurers are driven to limit access to medical treatments, “star” hospitals and specialists to discourage expensive customers from applying for coverage. This is a prime example of unintended consequences—regulations intended to help people turn out to also harm people.

All government policies come with a price. These costs can come in the form of higher taxes, higher priced goods and services, fewer jobs, slower economic growth, sluggish innovation, rationing, long lines, etc. Some costs voters are willing to bear, but others they are not.

But far too often, policy is made without voters fully understanding the costs of policies their elected officials and unelected regulators implement. A truly representative and accountable democracy depends on government officials being honest and clear with voters about what sacrifices voters will need to make in order to obtain a policy benefit.

Furthermore, it’s important for policymakers to understand if voters are willing to shoulder the costs to get a particular government benefit. Thus, it is incumbent upon polling organizations to investigate what trade-offs Americans are willing to make—and that which they are not.

In sum, before declaring overwhelming public support for a public policy, one should always check public willingness to bear its costs.