Most polling of the Affordable Care Act finds popular support for many of its benefits when no costs are mentioned. However, a new Cato Institute/​YouGov survey finds that support plummets, even among Democrats, if its popular provisions harm the quality of health care. The poll finds that risks of higher premiums, higher taxes, or subsidies to insurers are less concerning to Americans than harm to the quality of care.


By a margin of 63% to 33%, Americans support the ACA’s community‐​rating provision that prevents health insurers from charging some customers higher rates based on their medical history. However, support flips with a majority opposed 60%-31% if the provision caused the quality of health care to get worse.


Majorities also come to oppose the ACA’s community‐​rating provision if it increased premiums (55% oppose, 39% favor), or raised taxes (53% oppose, 40% favor). However, threats to the to quality of care appear to be a pressure point for most Americans. 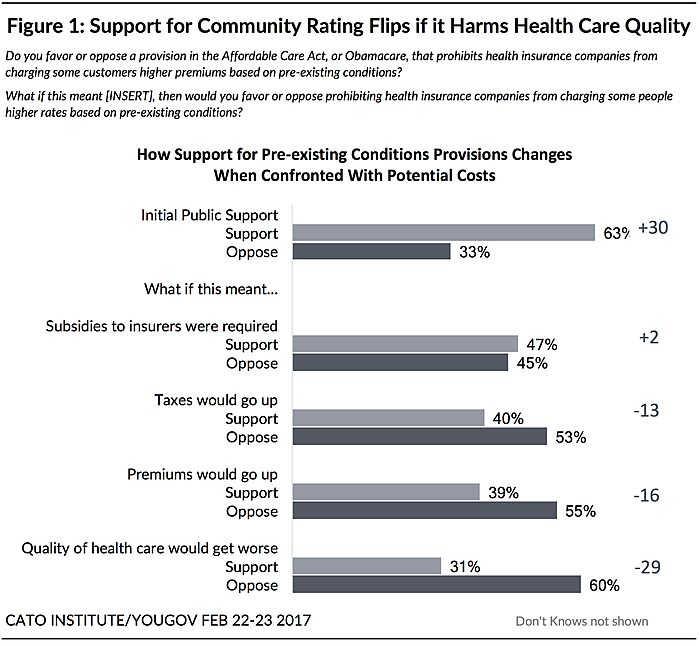 When respondents were asked follow‐​up questions about specific types of quality reductions, Americans turned against the ACA’s community‐​rating provision most if: 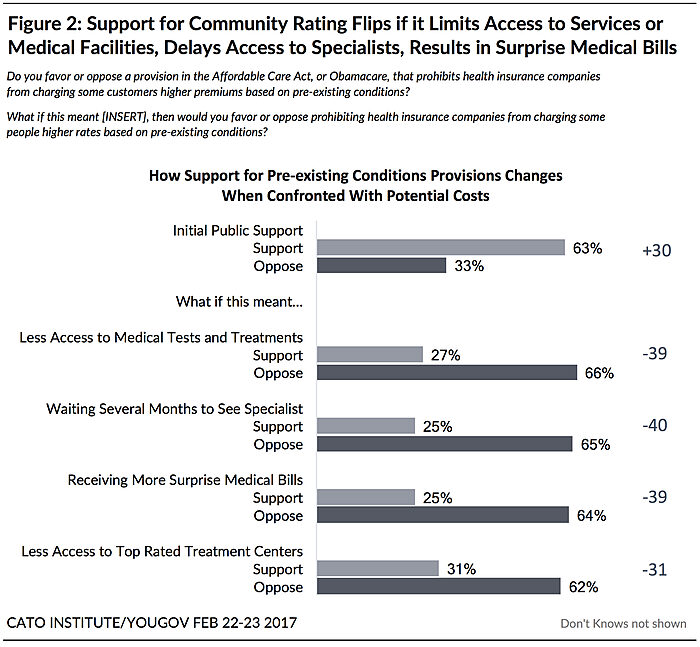 Democrats Turn Against ACA’s Popular Provisions When Quality at Risk


Democrats are key to the shift on quality. Majorities of Democrats (58%) would be willing to pay more in health insurance premiums or pay higher taxes (60%) to prevent insurers from charging higher rates to people with preexisting conditions. But a majority would oppose (55%) this rule if it meant the quality of health care would get worse.


Several demographic groups are less sensitive to financial costs associated with the provision. But, threats to quality narrow the gap.


For instance, 48% of Americans under 35 say they would oppose the community‐​rating provision if it meant their taxes would increase compared to 57% of Americans 35 – 54. However, two‐​thirds of both groups would oppose if the provision resulted in limited access to medical tests and treatments.


Americans earning above $80,000 a year (47%) are more willing than Americans making less than $40,000 a year (37%) to pay higher premiums to prevent insurers from charging higher rates to people with pre‐​existing conditions. However, 60% and 62% respectively would turn against the provision if it meant they’d have less access to top‐​rated medical facilities and treatment centers.


Quality considerations bridge the gap across partisanship, income, and age. 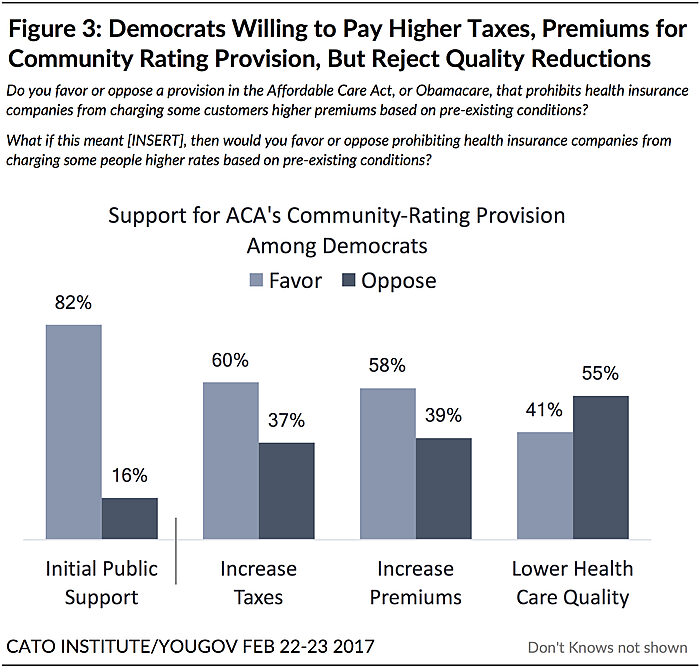 
We find the same pattern in the second Cato Institute/​YouGov survey when asking about the ACA’s guaranteed‐​issue provision that requires health insurers cover anyone who applies for health insurance, including those with pre‐​existing conditions. Support for this provision flips from 77%-20% support, to 75%-20% opposed if it caused the quality of health care to get worse. Although majorities also come to oppose the provision if it raised premiums (60%) or taxes (55%), threats to quality result in the most dramatic shift.


By asking these questions on a separate survey, respondents were not impacted by the community‐​rating provision questions. Thus, we find that quality is a key pressure point for most Americans in two separate surveys.


Once again, Democrats are essential to the dramatic shift on quality. Although majorities of Democrats would be willing to pay higher taxes (60%) and higher premiums (51%), a majority would oppose (65%) the guaranteed‐​issue provision it caused the quality of health care to decline.


The survey also found that Americans might continue their support for the ACA’s guaranteed‐​issue (52%) and community‐​rating (47%) provisions if either required Congress to provide taxpayer subsidies to private insurance companies. This indicates that Americans distinguish between potential costs, are willing to accept some more than others, but are unwilling to sacrifice on quality. 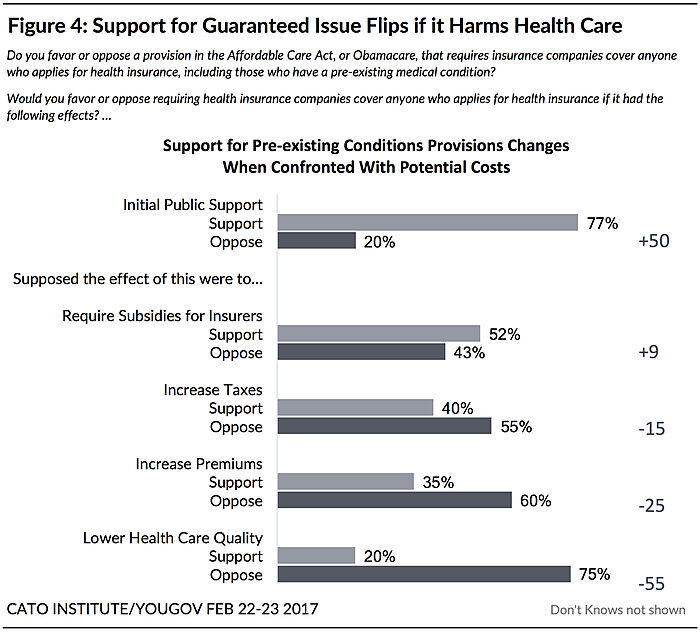 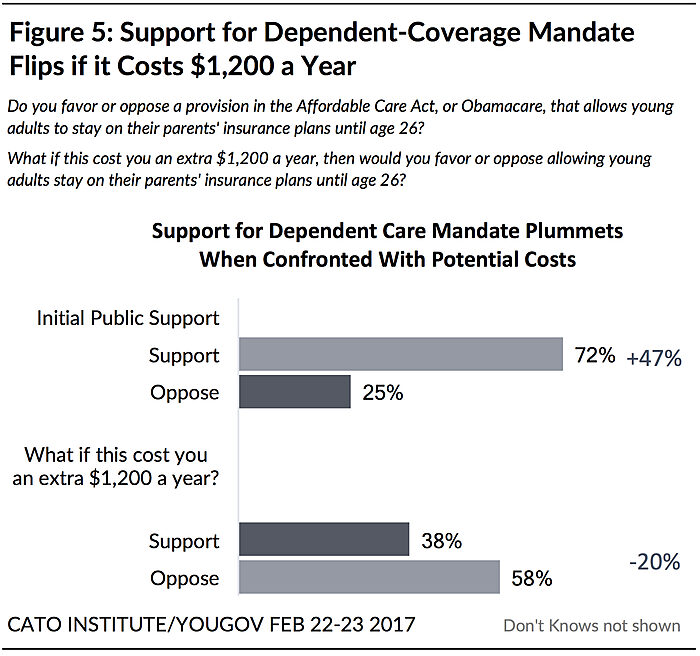 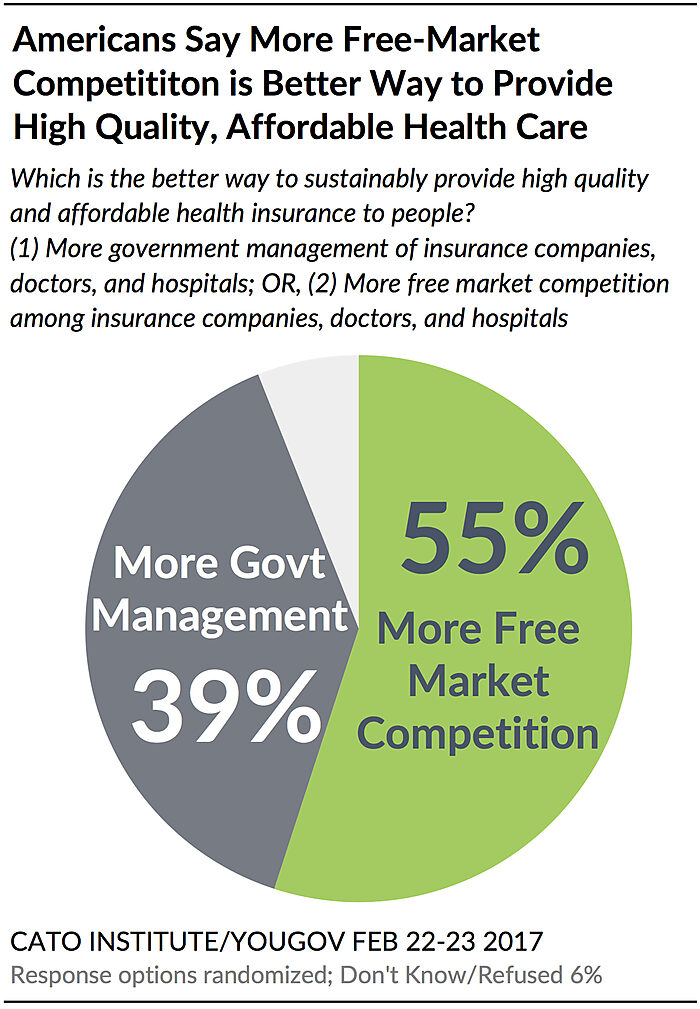 
These results are consistent with similar polling from the Kaiser Family Foundation, which found 51% believe market competition would better reduce prescription drug prices than government regulation (40%).


Unsurprisingly, respondents line up by partisanship. A majority (59%) of Democrats believe more government management of the health care system is what’s needed while 82% of Republicans and 59% of independents believe free‐​market competition would be more effective.


The pattern of quality concerns moving public opinion the most is consistent with polling data over the past 20 years. Back in 1994, Gallup asked a similar set of questions about universal health insurance coverage. Like these results, the poll first found strong support 80%-16% for universal coverage. When Gallup asked follow‐​up questions, as we have done here, support declined to 55% if universal coverage raised premiums. But the poll measured the most dramatic shift against universal coverage if it were to limit the availability of health services with 69%-26% opposed. 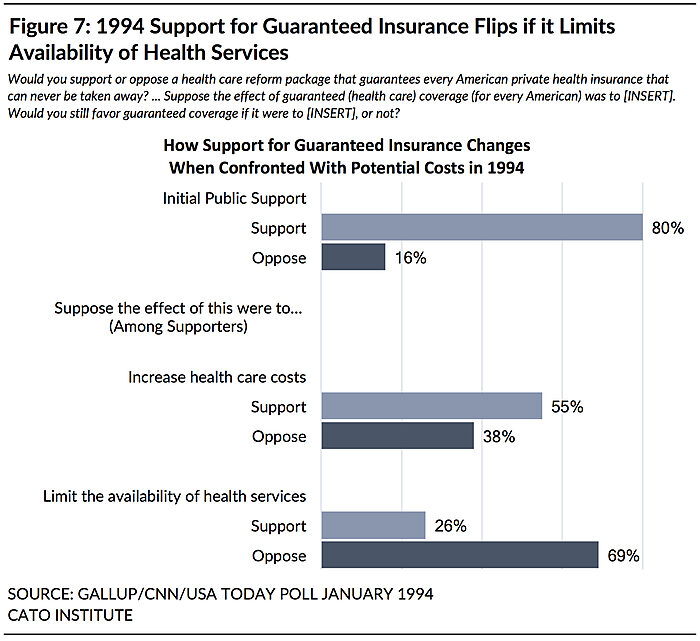 Once again in 2012, the Reason‐​Rupe poll, which I directed at the time, asked a comparable set of questions about the ACA’s community rating provision and found the same pattern. At first, the poll found a majority (52%) who supported the provision. But 50% would oppose if it raised premiums, and 76% would oppose if it reduced health care quality. 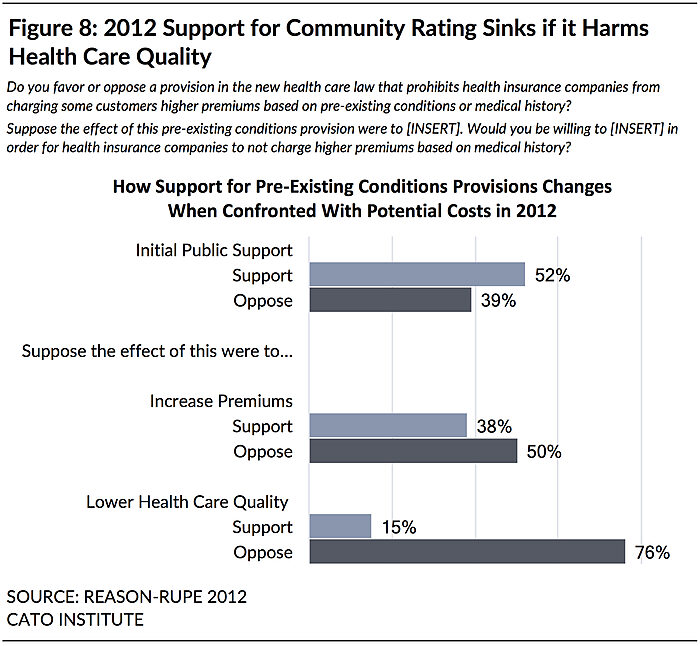 A CBS/New York Times July 2009 survey used a similar wording construction to the questions used in the Cato Institute poll. First, it asked if it was the federal government’s responsibility to guarantee insurance for all Americans, finding 55% in agreement. However, “if that meant the cost of your own health insurance would go up,” support declined to 43%. This survey did not measure how support changed if health care quality was at risk.


These surveys demonstrate that polls presenting only the benefits of health care policies risk inflating support for such policies. Support for even the most popular provisions in the ACA drop when the public is asked to consider their likely costs in concert with the benefits. Furthermore, reductions in the quality of care, more so than premium increases, have the most significant impact on support.