Kavanaugh, Klayman, and the Fourth Amendment 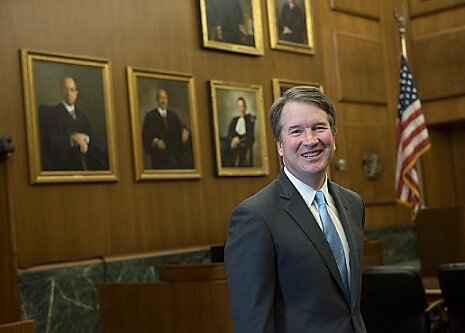 In the few days since President Trump nominated him to be an Associate Justice on the Supreme Court, Judge Brett Kavanaugh has seen his life put under the microscope. It turns out that the U.S Court of Appeals for the D.C Circuit judge really likes baseball, volunteers to help the homeless, and has strong connections to the Republican Party – especially the George W. Bush administration. More consequentially, Kavanaugh is an influential judge with solid conservative credentials. For libertarians, Kavanaugh’s record includes much to applaud, especially when it comes to reining in the power of regulatory authorities. However, at least one of Kavanaugh’s concurrences reveals arguments that should concern those who value civil liberties. Members of the Senate Committee on the Judiciary should press Kavanaugh on these arguments at his upcoming confirmation hearing.

In 2015, Kavanaugh wrote a solo concurrence in the denial of rehearing en banc in Klayman v. Obama (full opinion below), in which the plaintiffs challenged the constitutionality of the National Security Agency’s (NSA) bulk telephony metadata program. According to Kavanaugh, this program was “entirely consistent” with the Fourth Amendment, which protects against unreasonable searches and seizures.

The opening of the concurrence is ordinary enough, with Kavanaugh mentioning that the NSA’s program is consistent with the Third Party Doctrine. According to this doctrine, people don’t have a reasonable expectation of privacy in information they volunteer to third parties, such as phone companies and banks. This allows law enforcement to access details about your communications and your credit card purchases without search warrants. My colleagues have been critical of the Third Party doctrine, filing an amicus brief taking aim at the doctrine in the recently decided Fourth Amendment case Carpenter v. United States.

Yet in the next paragraph the concurrence takes an odd turn. Kavanaugh argues that even if the government’s collection of millions of Americans’ telephony metadata did constitute a search it would nonetheless not run afoul of the Fourth Amendment:

Even if the bulk collection of telephony metadata constitutes a search,[…] the Fourth Amendment does not bar all searches and seizures. It bars only unreasonable searches and seizures. And the Government’s metadata collection program readily qualifies as reasonable under the Supreme Court’s case law. The Fourth Amendment allows governmental searches and seizures without individualized suspicion when the Government demonstrates a sufficient “special need” – that is, a need beyond the normal need for law enforcement – that outweighs the intrusion on individual liberty. Examples include drug testing of students, roadblocks to detect drunk drivers, border checkpoints, and security screening at airports. […] The Government’s program for bulk collection of telephony metadata serves a critically important special need – preventing terrorist attacks on the United States. See THE 9/11 COMMISSION REPORT (2004). In my view, that critical national security need outweighs the impact on privacy occasioned by this program. The Government’s program does not capture the content of communications, but rather the time and duration of calls, and the numbers called. In short, the Government’s program fits comfortably within the Supreme Court precedents applying the special needs doctrine.

This paragraph includes a few points worth unpacking: 1) That the collection of telephony metadata is permitted under the “Special Needs” Doctrine, and 2) The 9/11 Commission Report buttresses the claim that “The Government’s program for bulk collection of telephony metadata serves a critically important special need – preventing terrorist attacks on the United States.”

Kavanaugh asserts that the NSA’s program serves a special need, and is therefore exempt from the Fourth Amendment’s warrant requirement. The so‐​called Special Needs Doctrine usually applies when government officials are acting in a manner beyond what is associated with ordinary criminal law enforcement. Justice Blackmun explained the justification for the doctrine in his New Jersey v. T.L.O. (1985) concurrence:

Only in those exceptional circumstances in which special needs, beyond the normal need for law enforcement, make the warrant and probable cause requirement impracticable, is a court entitled to substitute its balancing of interests for that of the Framers.

Kavanaugh’s concurrence includes a few notable examples of the Special Needs Doctrine, such as drug tests for high school athletes and drunk driving roadblocks. Unlike Klayman, which concerned the indiscriminate bulk collection of millions of citizens’ telephony metadata, these cases involved limited searches specific to an isolated government interest.

The Supreme Court did not find this or some of the government’s arguments persuasive:

But we do not think a case has been made for the requested departure from Fourth Amendment standards. The circumstances described do not justify complete exemption of domestic security surveillance from prior judicial scrutiny. Official surveillance, whether its purpose be criminal investigation or ongoing intelligence gathering, risks infringement of constitutionally protected privacy of speech. Security surveillances are especially sensitive because of the inherent vagueness of the domestic security concept, the necessarily broad and continuing nature of intelligence gathering, and the temptation to utilize such surveillances to oversee political dissent. We recognize, as we have before, the constitutional basis of the President’s domestic security role, but we think it must be exercised in a manner compatible with the Fourth Amendment. In this case we hold that this requires an appropriate prior warrant procedure.

Kavanaugh’s argument that the NSA’s domestic spying can override Fourth Amendment protections thanks to “special needs” is at odds with the Supreme Court’s holding in the Keith Case. If the Court expanded special needs to cover the bulk collection of telephony metadata it would be the most expansive application of the doctrine to date.

In making this claim, Kavanaugh cited the 2004 9/11 Commission Report. This report does not directly recommend the bulk collection surveillance at issue in Klayman, nor does it make the argument that such a program would have prevented the 9/11 attacks.

In fact, the Privacy and Civil Liberties Oversight Board’s (PCLOB) 2014 report on the NSA’s bulk telephony surveillance program, published before Kavanaugh’s Klayman concurrence, found that the program was not a critically important part of the ongoing War on Terror:

Based on the information provided to the Board, we have not identified a single instance involving a threat to the United States in which the telephone records program made a concrete difference in the outcome of a counterterrorism investigation. Moreover, we are aware of no instance in which the program directly contributed to the discovery of a previously unknown terrorist plot or the disruption of a terrorist attack. And we believe that in only one instance over the past seven years has the program arguably contributed to the identification of an unknown terrorism suspect. In that case, moreover, the suspect was not involved in planning a terrorist attack and there is reason to believe that the FBI may have discovered him without the contribution of the NSA’s program.

Even in those instances where telephone records collected under Section 215 offered additional information about the contacts of a known terrorism suspect, in nearly all cases the benefits provided have been minimal — generally limited to corroborating information that was obtained independently by the FBI.

Kavanaugh’s assertion that the NSA’s invasive surveillance program is justified on national security grounds is simply not supported by the 9/11 Commission Report or the PCLOB’s report.

If the Senate does vote to confirm Kavanaugh, as is widely expected, he will likely be on the bench for decades. In that time, he will hear cases involving warrantless surveillance justified on national security grounds. This surveillance may involve facial recognition, drones, and other emerging surveillance methods. That a potential Supreme Court justice might view such warrantless surveillance as justified because of a national security‐​based “special needs” exception to the Fourth Amendment should worry everyone who values civil liberties. Members of the Senate Committee on the Judiciary must ask Kavanaugh to better explain his reasoning in Klayman.