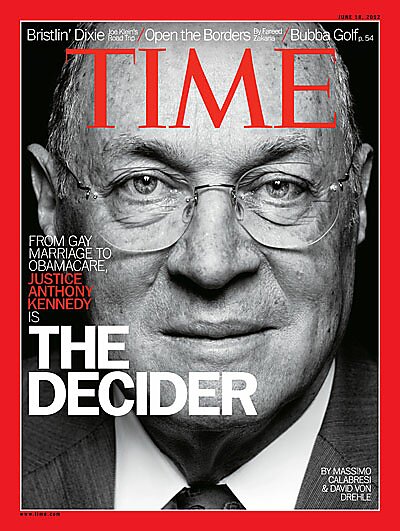 He's often the pivotal vote on a divided Supreme Court, Massimo Calabresi and David Von Drehle write. Sometimes he sides with the conservatives, sometimes with the liberals. It seems to mystify them:

Over that time, Kennedy cast the pivotal vote in cases dealing with abortion, the death penalty, gay rights, the war on terrorism, campaign finance and school prayer....

Efforts to fit Kennedy's major opinions into a clear, coherent philosophy have met with little success. He generally sides with the court's conservatives but is not tethered to any particular constitutional doctrine. "There is no grand unified theory for Justice Kennedy's jurisprudence," says Viet Dinh, a leading conservative court watcher....

More and more cases are decided based on his idiosyncratic values.

They do provide a few hints:

Instead of grounding abortion in a "right to privacy," which is never mentioned in the Constitution, Kennedy declared it to be part of the well-established right to liberty....

Opponents of Obamacare focused their Kennedy briefs on a number of opinions in which he maintained the importance of limiting government intrusions into individual liberty.

Hmmm. Justice Kennedy seems to be very concerned with liberty. He often sides with conservatives on economic issues (which are actually never mentioned by Time) and campaign speech, and with liberals on civil liberties, gay rights, and school prayer. Pretty inconsistent, huh?

Or then again, maybe Justice Kennedy has a basically libertarian view of the world and the Constitution. The word "libertarian" never appears in the article. Perhaps it should.

And it's not like the idea of Justice Kennedy's libertarianism is a deep, dark secret. The writers might have consulted Helen Knowles's book The Tie Goes to Freedom: Justice Anthony M. Kennedy on Liberty. Or Frank Colucci's book Justice Kennedy's Jurisprudence: The Full and Necessary Meaning of Liberty. Or Randy Barnett's Cato Supreme Court Review article on the Texas case, "Justice Kennedy's Libertarian Revolution."

I'm not saying that Justice Kennedy is a down-the-line, Nozick-reading, Cato Institute libertarian. He did join the Court's statist majority in the medical marijuana case Raich v. Gonzales. And he infuriated libertarians by joining the majority in striking down state term limits and upholding state eminent domain. But the books and article cited above, and the Institute for Justice's 1997 rating of Supreme Court justices, do point to a strong libertarian streak in Kennedy's jurisprudence.

Time's inability to point that out reminds me of a column I did in 2010, on another distinguished journalist's inability to apply the obvious label to Nobel laureate Mario Vargas Llosa's political views -- which are clearly libertarian, or as he would put it, liberal. Are journalists really so stuck in a red/blue, liberal/conservative world that they can't identify libertarianism even when they describe its elements?