Jonathan Turley: Then and Now

George Washington University law professor Jonathan Turley has come in for some rough treatment in the press and the Twitterverse since his appearance earlier this week before the House Judiciary Committee hearing on “Constitutional Grounds for Presidential Impeachment,” where he served as the lone GOP witness and impeachment skeptic on a panel of four.

Turley is a first‐​rate scholar from whom I’ve learned a great deal. I drew heavily on his impeachment scholarship in my 2018 study “Indispensable Remedy: The Broad Scope of the Constitution’s Impeachment Power.” While there’s a lot to criticize in his testimony, it’s unfair and unserious to dismiss him as a partisan hack. Turley’s politics, it seems to me, have always been heterodox and hard to squeeze into a conventional left‐​right framework. If forced to guess, I’d say his growing skepticism toward impeachment has more to do with his 2010 experience as defense counsel in a judicial impeachment trial than any latent #MAGA tendencies.

That said, I found Turley’s testimony this week tendentious, inconsistent with his prior work, and, in important respects, wrong. As the hipsters used to say, I prefer his early stuff. 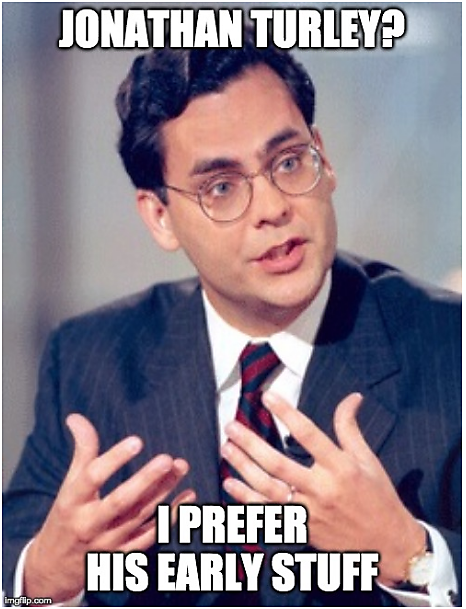 Turley argues that the evidentiary record is far too thin—“facially insufficient”—to justify impeachment by the House at this stage. Among other things, “the House has not bothered to subpoena the key witnesses” who would have first hand knowledge of whether there was a quid pro quo in the Ukraine affair. (There’s a fairly obvious reason for that.) At times, he appeared to suggest that the House needs to secure enough evidence to try the case before the Senate can try the case.

But as Rep. Justin Amash (ex‐​R MI) points out: Turley “consistently conflates impeachment in the House and trial in the Senate. The House simply *charges* impeachable offenses, and there’s clearly probable cause for charges.” The House’s role, in this view, is analogous to that of a grand jury: determining whether there’s adequate reason to have a trial in the first place.

That’s how Jonathan Turley used to see it as well. In his 1998 testimony during the Clinton impeachment hearings, Turley explained that

The [Constitutional Convention] debates reflect the view that the Senate would be the forum for the appearance of witnesses and a comprehensive treatment of the allegations of misconduct against a president. The Framers did not appear to anticipate the type of hearing with witnesses and subpoenas used during the Nixon inquiry by the House Judiciary Committee.

Instead, Turley argued, “articles of impeachment are a type of presidential indictment under Article I…. the Framers specifically mandated that a trial be held in the Senate under specific conditions while leaving the House to impeach in any fashion that it chooses.”

In that light, Turley’s insistence Wednesday that, before the House can impeach, “there needs to be clear and unequivocal proof of a quid pro quo,” is mystifying. Where’s he getting that? The Constitution doesn’t specify any particular burden of proof for impeachment, much less “clear and unequivocal”—a standard higher than is required for criminal indictment.

Equally puzzling is Turley’s newfound conviction that it borders on illegitimate to impeach a president unless you can prove he committed a federal crime. “We have never impeached a president solely or even largely on the basis of a non‐​criminal abuse of power allegation,” he warns, and we shouldn’t start now. Turley acknowledges that “it is possible to establish a case or impeachment based on a non‐​criminal allegation of abuse of power,” but even though we’ve impeached other federal officers solely for non‐​criminal abuses, for a president, there should be a higher bar.

That’s not how Turley saw it in 1998. “There is no textual basis to claim that the Framers intended a lower standard to apply in the impeachment of federal judges than in the impeachment of presidents,” he testified, noting James Madison’s argument that the president’s position makes him more dangerous than other federal officers, and a removal mechanism even more vital.

In this week’s testimony, Turley asserts that “Congress has always looked to the criminal code in the fashioning of articles of impeachment.” That’s simply not true.

References to statutory crimes are absent from the impeachment cases in the early republic. Of the three federal impeachments in the decade and a half following ratification, only one, Sen. William Blount’s, involved conduct that was even arguably a crime. In 1804, Congress impeached and removed a federal judge for drunken ranting from the bench, and, the next year, came within four votes of removing a Supreme Court Justice for partisan rulings and intemperate harangues. And throughout our entire constitutional history, fewer than a third of the impeachments approved by the House “have specifically invoked a criminal statute or used the term ‘crime.’”

Turley argues that in past presidential impeachments, abuse of power allegations “have been raised in the context of violations of federal or criminal law.” But the 1974 House Judiciary Committee report explained that:

President Nixon’s actions…. were contrary to his trust as President and unmindful of the solemn duties of his high office. It was this serious violation of Richard M. Nixon’s constitutional obligations as president, and not the fact that violations of Federal criminal statutes occurred, that lies at the heart of Article I [emphasis added].

Turley’s lengthy analysis of whether President Trump could be criminally convicted under federal bribery, extortion, and campaign finance statutes is thus quite beside the point. Technical statutory violations have never been the issue in impeachment, the constitutional purpose of which isn’t to punish bad behavior, but to protect the public from officers who violate the public trust.

Perhaps the most important point to come out of Turley’s testimony is one I almost missed while clocking the discrepancies between Turley and Turley 2.0. Luckily, Joshua Geltzer highlights it in the Atlantic: in his opening remarks Wednesday, Turley “cut to the heart of the matter: ‘The use of military aid for a quid pro quo to investigate one’s political opponent, if proven, can be an impeachable offense.’” As Geltzer notes, the fact that Professor Turley thinks the case hasn’t yet been made is neither here nor there: when even the GOP’s expert legal witness concedes that the central charge, if proven, meets the constitutional standard, the constitutional debate is over. “It’s now simply a matter of reviewing the facts.” Back in the day, Jonathan Turley would have told us that’s a job for the Senate.