Barack Obama and Joe Biden both get a perfect 100 from the big-government liberal Americans for Democratic Action, which probably tells you all you need to know. But I remember a dramatic moment back in 1991 when Biden made his commitment to unlimited government clear and dramatic. Clarence Thomas had been nominated for the Supreme Court, and Biden, then chairman of the Senate Judiciary Committee, was questioning him. Biden bore in on the possibility that Thomas might believe in "natural law," the idea, as Tony Mauro of USA Today summarized it, that "everyone is born with God-given rights - referred to in the Declaration of Independence as 'inalienable rights' to 'life, liberty and the pursuit of happiness' - apart from what any law or the Constitution grants." Biden singled out Cato adjunct scholar Richard Epstein and Cato author Stephen Macedo and demanded to know if Thomas agreed with them that the Constitution protects property rights. Waving Epstein's book Takings in the air like Joe McCarthy with a list of communists, Biden demanded to know, as we very loosely paraphrased it in Cato's 25-year Annual Report (pdf; page 14), "Are you now or have you ever been a libertarian?" As most judicial nominees do when pursued by a senator roused to defend his power like a mama bear, Thomas assured Senator Biden that he wouldn't take the Constitution too seriously. Here's Biden on the warpath: 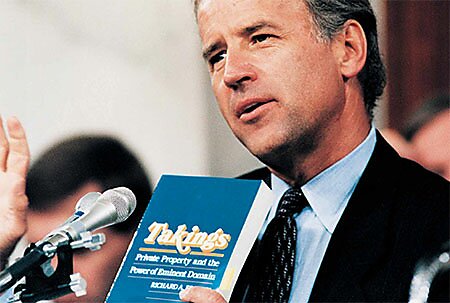 Was Biden right to worry? Well, as we said in the Annual Report, four years later Thomas joined the Court in declaring, "We start with first principles. The Constitution creates a Federal Government of limited powers." But ten years later the Court finally considered whether the Constitution protects property rights and said, "Ehh, not so much." Thomas protested, "Something has gone seriously awry with this Court’s interpretation of the Constitution. Though citizens are safe from the government in their homes, the homes themselves are not." Biden was right to worry that Thomas's understanding of individual rights and the Constitution just might put some limits on the power of government.