IOER and Banks’ Demand for Reserves, Yet Again

In our recent American Banker opinion piece, Heritage's Norbert Michel and I argue that, if the Fed is really serious about shrinking its balance sheet, it had better quit paying interest on banks' excess reserves (IOER) as well. How come? Because the current, relatively high IOER rate  is contributing to a strong overall demand for excess reserves, while a shrunken Fed balance sheet will mean a reduced supply of reserves. Reducing the supply of reserves while doing nothing to reduce banks' demand for them is a recipe for demand-driven deflation, which is a monetary policy no-no.

Predictably (because it has happened every time I write on this topic) our article generated several comments to the effect that we didn't know what we were talking about, because banks couldn't possibly prefer the meager 100 basis points they can earn by holding reserves (or something less than that, if they are obliged to pay FDIC premiums) to the far greater amount they can earn by making loans.

The remarkable thing about these criticisms is that they all appear to deny that banks (or some banks, in any event) are in fact sitting on large amounts of excess reserves, and that they are, to that extent, settling for a return on those reserves of 100 basis points or less, instead of swapping reserves for other assets.

"For a bunch of 'smart guys," our first commentator writes,

these fellows don't understand how banking works. 10 times out of 10 a bank would rather make a loan than have the funds parked at the Fed. Of course the loans have to be of the quality that the bank would expect the borrower to be able to repay the loan.

So far as the evidence up to October 2008 is concerned, our commentator is on solid ground, for until then banks did in fact prefer making loans to holding reserves 10 times out of 10. But that has manifestly not been the case since since October 2008, which happens to be when the Fed started paying IOER. Since then, as the figure below, comparing commercial banks' loans and leases to their total deposits and Fed reserve balances, shows, the odds that a bank would rather make a loan than park funds at the Fed have been closer to 8 to 10:

Although our friend Chris ("r.c.") Whalen, a highly-regarded bank consultant, is at least aware that reserves now make up a substantial share of commercial banks' assets, he denies that this has anything to do with the fact that those reserves now yield a positive (if seemingly modest) return.

Whalen's brief comment consists of two parts. The first, declaring that "The Fed is not paying banks not to lend. It prices the rate for excess reserves and Fed funds at a margin designed to preserve balance," strikes me as nothing more than an exercise in empty semantics. Whatever "balance" the Fed may be trying to strike, the fact remains that it involves a substantial increase in banks' overall demand for excess reserves. And if paying 100 basis points instead of zero doesn't make reserves more desirable, and all the more so when rates are generally low, then it is time for us economists to toss-away everything we thought we knew about the workings of supply and demand.

The rest of Whalen's comment is more substantial. "Even if you ended paying interest on excess reserves," he observes, "the totals would not move because they are ultimately tied to a purchase of securities by the FOMC." More substantial, but still wrong. As I tried to make explain in a previous Alt-M article, although the Fed's security purchases largely determine the total outstanding quantity of bank reserves (and currency), those purchases  don't determine banks quantity of excess reserves, which depend on what banks choose to do with reserves that come their way.

The point is perhaps best illustrated by looking at statistics from before 2008. Back then, banks hardly held any excess reserves; yet ongoing Fed security purchases (and sales) caused the total quantity of reserves to vary considerably, at least by pre-2008 standards:

Again, for emphasis: the size of the Fed's balance sheet determines the quantity of total, but not excess, reserves. If excess reserves increase along with total reserves, as they have tended to do since the fall of 2008, that's because banks have found it worthwhile to accumulate excess reserves, and not because they could not possibly get rid of them.

The last comment on our piece is by Wayne Abernathy, the ABA's Executive VP for Financial Institutions Policy and Regulatory Affairs. In full it reads,

A major problem with the authors' theory is the assumption that banks prefer to place money at the Fed rather than lend it out. In fact, banks would rather receive the 3.19% margin that they get on loans than the net 60 or 70 basis points that they get from the Fed. Loan demand, while growing, is not yet vigorous enough to absorb the flood of deposits that banks are still receiving. The banks' choice is place the excess deposits with the Fed or tell their depositors "no thank you."

In referring to "60 or 70" rather than 100 basis points as the net return on reserves, Abernathy evidently has domestic U.S. banks in mind, since U.S. branches and agencies of foreign banks, being exempt from FDIC charges, earn their 100 basis points free and clear. Pointing this out isn't nit-picking, because  foreign banks have been holding a very large share of all outstanding excess reserves, in part precisely because reserves yield more to them than to their domestic counterparts. But the more important point is that, so far as both these foreign banks and the (mostly very large) U.S. banks holding large amounts of excess reserves are concerned, holding Fed balances is in fact more profitable, at the margin, than lending the funds those balances represent.

Evidently, so far as these banks are concerned, the relevant net margin isn't 3.19%. So what is it? First of all, margins for the largest U.S. banks and foreign bank branches and agencies, which are the ones holding most of the reserves, are much lower than that for U.S. banks as whole. Although the FRED database doesn't supply separate net interest margin data for the very biggest U.S. banks (instead it gives the margin for banks of over $15 billion in assets, which is not high enough for the purpose), it does report the margin for New York banks, which is a better though still rough proxy.  Here's a chart comparing that measure to net interest margins for U.S. banks as a whole, and also to margins for banks in the Euro area, which are available in FRED only until 2014:

In fact, many foreign banks found it profitable to acquire and retain excess dollar reserves for the sake of earning the modest spread between the risk-free IOER rate and lower effective Fed Funds and private repo rates. We know that, because they've been arbitraging that difference for some time. Foreign central banks, in the meantime, have been parking money at the Fed through its reverse-repo facility, which allows them to arbitrage the spread between what the facility pays and rates on short-term  T-bills. Before the Fed began paying banks to keep balances with it, these arbitrage opportunities simply didn't exist.

The 3.19% margin to which Mr. Abernathy refers would, in any event, be irrelevant allowing, as he does, that the demand for loans is  not "vigorous enough" to actually support it! Here it's worth keeping in mind that, whereas the demand schedule for bank reserves is, in effect, a horizontal line at whatever rate the Fed is paying, the  demand schedule for loans slopes downward. Assuming a state of equilibrium, banks have already expanded their loan portfolios to the point where the net loan margin, whatever its value may be for banks' entire loan portfolio, is no higher at the margin than the IOER rate. Beyond that, reserves dominate loans. In equilibrium, in other words, parking another dollar at the Fed pays more than lending it does. Were IOER reduced to zero again, on the other hand, banks would once again find lending more profitable than reserve-hoarding, and they would continue to make loans until the net margin on them (the marginal net margin, that is!)  itself approached zero.

In case it helps, here is a picture of what I just said: 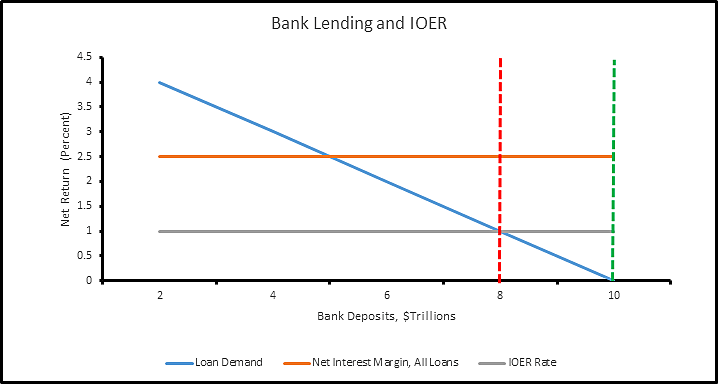 In the picture, the blue line is the (downward-sloping) demand schedule for bank loans, while the orange and grey lines are the Net Interest Margin for all bank loans and the IOER rate, respectively. The picture assumes a given level of total bank deposits, here set equal to $10 trillion. The vertical red line shows equilibrium quantity of bank loans with IOER=1, while the vertical green line shows the equilibrium quantity with IOER=0.  The numbers are, of course, only meant to be suggestive.  Since banks can't dispose of reserves (though they can dispose of excess reserves by creating more deposits), a reduced IOER rate would in practice lead, other things equal, to growth in the level of both loans and deposits.

For those who continue nonetheless to doubt that the IOER rate has much bearing on banks' demand for excess reserves, I offer, as a final exhibit, and without commentary, one last chart, this time comparing the difference between the IOER rate and the LIBOR rate, which I treat as a measure of the relative yield on reserves, to the overall ratio of reserves to commercial bank deposits: