Shortly before Christmas the Department of Homeland Security (DHS) released a report detailing deportations (henceforth “removals”) conducted by Immigration and Customs Enforcement (ICE) during fiscal year 2014. Below I present the data on removals in historical context – combined with information from the Migration Policy Institute and Pew. See my previous writings on this topic here and here.

The number ofinteriorremovals under the last six years of the Bush administration (the first two yearsare unavailable so far) was about 475,000. From 2009–2014, the Obama administration removed about 950,000 from theinteriorof the United States. 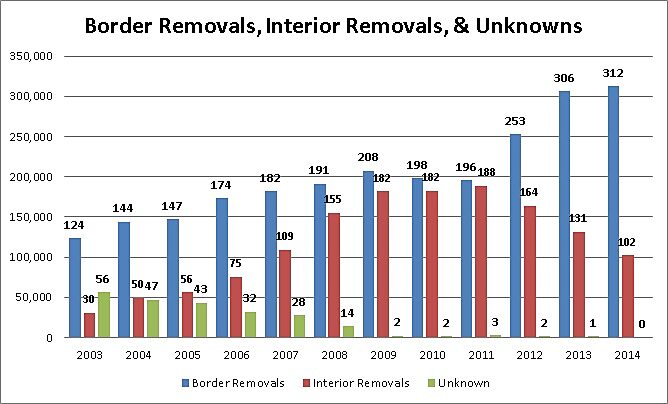 The Obama administration’s recent decrease in the number of interior removals is not the whole story. The best way to measure the intensity of immigration enforcement is to look at the percentage of the unauthorized immigrant population removed in each year. Based on estimates of the total size of the unauthorized immigrant population, 0.89 percent of that population was removed from the interior of the United States in 2014 – down from 1.15 percent in 2013.

For every year for which data was available, the Bush administration removed an average of 0.7 percent of the interior unauthorized immigrant population. President Obama’s administration has removed an average of 1.39 percent of theinteriorunauthorized immigrant population every year of his presidency – about twice the rate as under the Bush administration. Even when focusing oninteriorremovals, President Obama is still out‐​deporting President Bush based on the data available.

Obama’sinteriorremoval statistics show a downward trend beginning in 2012 through to 2014. The Obama administration has also focused immigration enforcement on criminal offenders (not all unlawful immigrants are criminals) but the data is a little difficult to disentangle for 2014 so I left it out of this blog post – stay tuned for a future one on that topic.

The Obama administration has clearly not guttedinterior immigration enforcement as their 2014 figures for interior removals are higher than they were for every year of the Bush administration except for 2007 and 2008.