We started the week with an impeachment debate that looked like a rewarmed version of the one we had last year. “Read the transcript!”: when President Donald Trump got on the phone Saturday to lean on Georgia election officials, was it another “perfect call” or a second, sordid shakedown attempt?

By yesterday afternoon we were in entirely new territory: a violent mob storming and trashing the Capitol, four dead, guns and explosives seized, Congress evacuated, Vice President Mike Pence fleeing a mob inspired by the president’s tweets. “We will never concede,” Trump fumed at the pre‐​riot rally, “you don’t concede when there’s theft involved. Our country has had enough. We’re not going to take it any more.… if you don’t fight like hell, you’re not going to have a country any more.” Howard Beale only asked people to yell out of their windows, and he didn’t have nuclear weapons. 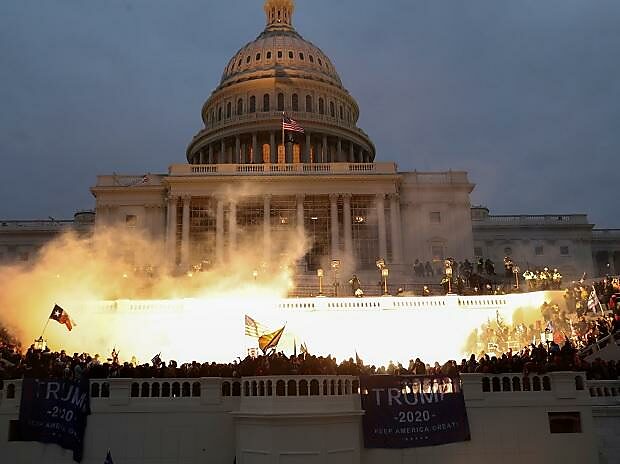 As of Wednesday night there were at least 32 House Democrats publicly calling for a second impeachment. Though both houses are supposedly done working until after inauguration, an article of impeachment has already been drafted for circulation. And today, the incoming Senate Majority Leader called on Pence and the Cabinet to trigger the 25th Amendment and remove Trump from power.

Can either of those things be done? Both? How might the Constitution’s presidential defenestration provisions work here? Let’s take a look.

First, impeachment: the article of impeachment being circulated now charges Trump with making “statements that encouraged—and foreseeably resulted in—imminent lawless action at the Capitol.” Is incitement to riot an impeachable offense? Yes: it’s not even a hard question.

“High Crimes and Misdemeanors” is a broad term designed to reach serious misconduct that demonstrates unfitness for high office: not just criminality or abuse of official power but, as the Nixon‐​era House Judiciary Committee report on “Constitutional Grounds for Presidential Impeachment” put it, conduct “grossly incompatible with the proper function and purpose of the office.”

In fact, the first impeachment case to result in conviction and removal from office, Judge John Pickering (1803) involved a federal judge whose main offense was showing up to work drunk and behaving in a “profane and indecent manner … degrading to the honor of the United States.” The 10th article of impeachment against President Andrew Johnson, approved by the House in 1868, charged the president with “a high misdemeanor in office” based on a series of “intemperate, inflammatory, and scandalous harangues” he’d delivered in an 1866 speaking tour. And Johnson didn’t incite a riot.

Impeachment is not a criminal process. You don’t have to prove all the elements of a federal criminal statute or pass the Supreme Court’s Brandenburg test for incitement. And, despite what the president’s lawyers argued the last time around, nothing in the Constitution requires extensive hearings. Even at this late date, the House could mount a fast‐​track impeachment.

Could a successful impeachment bar Trump from ever holding the presidency again? Article I, section 3 of the Constitution provides for an additional punishment beyond removal: “disqualification to hold and enjoy any Office of honor, Trust or Profit under the United States.” It’s only been invoked three times, all against federal judges.

There’s a question, however, of whether the presidency is an “Office of honor, Trust or Profit under the United States.” The legal scholar Seth Barrett Tillman has argued that “Office… under the United States” is a term of art like “Office under the Crown” in British law: it covers appointed officials, not elected ones. In that reading, Donald Trump could be barred from serving as a federal judge, or Secretary of State—but not a second shot at the presidency.

It seems to me, however, that this is more likely to remain an academic question than get resolved in the courts. The Senate only gets to a disqualification vote after 2/​3s of members present vote to convict. If everything’s changed and Trump has become so toxic that 17+ Republicans are going to vote to convict, it’s hard to imagine he’d bounce back hard enough to become the GOP nominee in 2024. (Though I guess weirder things have happened—are happening—right now).

What about the 25th Amendment, section 4 of which allows the Vice President to take the reins if he and a majority of the cabinet notify Congress “that the President is unable to discharge the powers and duties of his office”? I’ve argued before that the so‐​called “25th amendment solution” was a bad idea on legal and practical grounds. The drafters of the amendment deliberately made it harder than impeachment, which only requires a supermajority of the Senate for removal. In normal circumstances—if you can use that phrase in this context—unless you get 2/​3s of both houses of Congress to ratify the switch, triggering section 4 just puts the president in a temporary time out. It wasn’t designed to be an eject button for bad presidents, but for incapacitated ones. People aren’t worried that Trump’s literally “unable to discharge the powers and duties of his office”; they’re worried he has such bad judgment and low character that he’s going to do something incredibly destructive with those powers.

The main advantage the amendment offers over impeachment is speed: if Pence were willing and had enough of the Cabinet lined up, he could take over in a matter of minutes. What’s more, this late in the game, the clock would run out before Congress had to vote; triggering section 4 would effectively end the Trump presidency.

Back in 2017, I wrote about the kind of nightmare scenario where the “25th Amendment solution” makes the most sense:

If the president were to order an unprovoked nuclear first strike, it’s possible that the secretary of defense could, instead of transmitting the launch order, get on the phone with the veep instead. They could then decide to trigger section 4, putting the president into a “time‐​out” until Congress votes. And Congress, presumably, would go into that vote knowing that, unless they ratify the switch, they’re voting for nuclear war.

I really hope that scenario is nowhere near reality right now. Still, as the Nixon experience showed, the final days of a disgraced presidency are dangerous times. At a White House meeting two weeks ago, this president apparently raised the issue of an election “rerun” under martial law.

How sure are we that we’ve reached Peak Trump? Was yesterday as bad as it gets? Just how much should we be willing to stake on that proposition?