I Was a Rand Paul Fan Before It Was Cool

Sure, everybody’s a Rand Paul fan this morning, from the Heritage Foundation to the Huffington Post. Well, maybe not President Obama, John Brennan, and Harry Reid. And alas my good friends at the Wall Street Journal editorial board. But still, a wide array across the political spectrum. Me, I was a Rand Paul fan back in 2010. Indeed, I blogged this picture from Kentucky’s legendary Fancy Farm picnic: 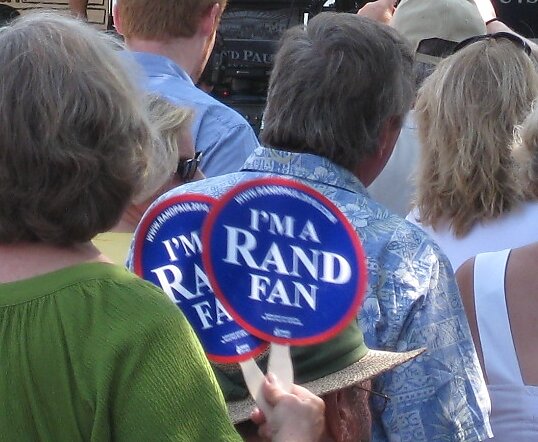 And a couple of weeks later on “The McLaughlin Group” I noted:

In Kentucky, the Democrats are calling Rand Paul an extremist. Rand Paul is responding by calling his opponent a Democrat. In the end, the voters will be more scared of a Democrat.

But even before that, I’d written up Paul’s Republican primary victory with this graphic illustration:

And I’d pointed out that Washington’s neoconservative establishment — from Dick Cheney to David Frum, Mitch McConnell, and Rick Santorum — had campaigned hard against Paul in the primary, and been soundly repudiated. They ran some nasty ads against Paul, and his Democratic opponent kept up the attack in the fall. And again the voters saw the attacks on “radical” Rand Paul and voted for him.


So anyway, I’m happy today to welcome all the new fans who made #StandWithRand a number one topic on Twitter last night. And let’s hope they all stick around, and keep trying to rein in the president’s authority to incarcerate and even assassinate American citizens on American soil.