A large group of House Republicans with support from President Trump has united behind comprehensive immigration reform legislation that would be their answer to the DACA impasse. Among other provisions, it would gut legal immigration, criminalize all unauthorized immigrants, and legalize a small percentage of the DACA population. But most pressing for Congress as it debates a long-term spending deal is its authorization of $130 billion in new spending over 5 years, tripling the current Customs and Border Protection budget and executing a six-fold increase in Border Patrol spending.

The Securing America’s Future Act (H.R. 4760) has 77 Republican cosponsors. It would authorize the construction of President Trump’s border wall (p. 254), 10,000 new Customs and Border Protection Officers and Border Patrol agents (p. 319), a biometric surveillance system at airports, seaports, and land ports of entry (p. 357), mandatory E-Verify employment verification program for all workers (p. 87), border drones and other border surveillance (p. 261), and much else. It would require spending more than $40 billion annually and more than $200 billion over five years.

Table: Customs and Border Protection Spending Under H.R. 4760 (In Millions$)

The level of spending that the House GOP wants over the next 5 years is twice as much as Customs and Border Protection (CBP) has spent in its entire history since its creation in 2003. For Border Patrol specifically—which is now a component with CBP—it would call for approximately six times as much spending per year and require a five-year total of $120 billion, which is more than Border Patrol has spent in its entire history. Since 1965, the agency has spent about $65 billion, roughly half the amount that the House bill requires over just the next 5 years. The figure below puts the change that the bill would make in historical context. 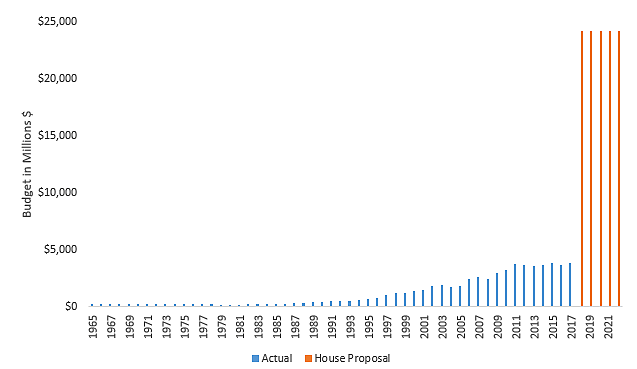 This funding request is unreasonable. It is so extreme that it alone could upend a spending-DACA deal because, due to the budget caps on discretionary spending, any new spending on the border would likely need to be offset. The bill itself reduces no other spending, and it makes virtually no serious effort to pay for the bill. Its legalization provisions do require Dreamers to pay a $1,000 border security “fee” (p. 400) but because only 10 percent of the Dreamer population would qualify for the legalization, this would raise at most $250 million—nowhere near the $130 billion in new spending that this bill requires.

It is important to note that these figures only authorize appropriations to occur. For the spending to actually occur, Congress will also need to appropriate the funds. However, White House Budget Director Mick Mulvaney told Fox News on Sunday that President Trump rejected an offer from Senator Chuck Schumer (D-NY) specifically because he only offered authorization, so certainly the expectation by the White House and House Republicans is that the Appropriations Committee will also fund the request.

What programs are House Republicans willing to cut to pay for Trump’s wall and border bureaucracy blowup? We must wait and see.