Key House Republicans with the support of the White House have introduced the Securing America’s Future Act (H.R. 4760) as their solution to the immigration impasse in Congress. But the bill would have far‐​reaching negative effects on economic and labor force growth in the United States, instituting the most severe restriction on legal immigrants since the 1920s.

Both bills would end the diversity green card lottery and ban the entry of all legal immigrants sponsored by U.S. family members, except for spouses and minor children of U.S. citizens. The RAISE Act would also reduce the age at which U.S. citizens can sponsor minor children from 21 to 18, while the House bill would, in effect, roughly halve the number of asylees. The House bill modestly increases the employment‐​based quota. Shockingly, both bills immediately cancel applications for millions of people who have waited years to become legal immigrants. 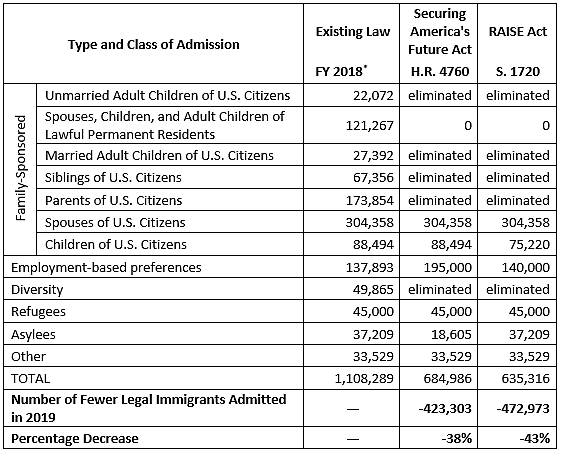 The authors of H.R. 4760 calculated a much smaller reduction in legal immigration by using the average flow of parents from 2006 to 2015 rather than the most recent level in 2016. They also ignore that the bill aims to reduce grants of asylum by, among other changes, imposing a much higher evidentiary standard even to apply (p. 233), which will likely reduce the number of new asylees by at least 50 percent.

Finally, the House Republicans assume that spouses and children of legal permanent residents will continue to receive green cards. But their bill reduces this category by the number of parolees who live here for longer than a year (p. 6). Based on available data and analysis, this number is likely larger than the quota. The authors of the RAISE Act appear to implicitly recognize this fact, which explains why their calculation of the new level under their bill is about the same as ours. House authors would have to amend the bill if they did intend to keep this category.

The RAISE Act authors also recognize that the cut will grow over time as fewer immigrants are able to obtain citizenship and sponsor new spouses and children. They estimate that after 10 years, it will have further decreased legal immigration by 100,000, leading to a 50 percent reduction. Based on this estimate, H.R. 4760 would also almost halve the number of legal immigrants by 2028. Fewer U.S. births to immigrants would further compound the damage.

In the entire history of the United States, the only policy‐​driven cuts in legal immigration that rival the effects of these bills were the Emergency Quota Act of 1921 and the Quota Act of 1924, which cut the number of legal immigrants by 496,000 in 1922 and 413,000 in 1925, respectively. Congress enacted these laws to keep out Italians and Eastern Europeans, specifically Jews, and were used throughout the 1930s to prevent the entry of German Jews.

These cuts lack any reasonable justification. Labor force growth is an essential component of economic growth. Immigrants already increase U.S. Gross Domestic Product by roughly $2 trillion annually. For the United States to remain competitive internationally, it needs an expanding workforce. These proposals will harm domestic growth and make it more difficult for U.S. businesses to out‐​produce their competitors around the world.

U.S. immigrants who primarily enter under the family sponsorship and diversity categories are the most highly educated in American history. True “merit‐​based” immigration reform would give these immigrants more opportunities to immigrate, not fewer. In any case, America needs workers at both ends of the skills spectrum to grow job opportunities for all Americans. There is simply no economic justification for banning so many legal immigrants.