However, in addition to some very wet periods, the [Southeast] region has also experienced periods of extreme drying.
- U.S. Global Change Research Program, 2014

The quote above is from the 2014 federal report, Climate Change Impacts in the United States, Southeastern Region. Given the title and the subject, one would have to conclude that our government is telling us that this is a result of climate change.

“Authoritative” documents such as this often wind up in legal proceedings, as the “science” backup for proposed regulations. As such, statements of this ilk should be based upon some semblance of reality.

We find that many of these “factuals” are indeed subject to test. The one above is yet another assertion that climate change, presumably caused by emissions of carbon dioxide, is the cause of an increase in the frequency or severity of “extreme” events.

Floods and droughts qualify. After all, a flood is merely a cases of extreme high streamflow, and a prolonged drought will result an extreme low. Further, it is hard to find any weather extreme, any hurricane, tornado or wildfire where some apparent authority finds a television camera and does not blame it on global warming.

The folly of such claims, however, is easily exposed by long-term data sets that go beyond the instrumental period. Such records reveal the true nature of natural climate variability and invariably show that present-day extreme weather events are in nearly every case eclipsed in frequency and magnitude by events from the historic past. And because such historic events occurred prior to the bulk of societal industrialization and the modern buildup of CO2 in the atmosphere, there is zero chance that those historic events were caused by human emissions of greenhouse gases. Recognizing these facts, as long as current extreme weather events remain within the realm of natural variability observed over the recent historic past, one cannot conclude with any degree of certainty that current extreme weather events have any anthropogenic or human-induced component in them. Stated another way, one simply cannot reject the hypothesis that such events are entirely natural.

Nor is it often very difficult to find data to test whether an assertion is true. With regard to southeastern floods and droughts, the recent study of Harley et al. (2017) is germane.

The storied Suwannee River is the second largest river system in Florida and is the least impacted by human disturbance. There are very good streamflow records beginning in 1927 that reveal multiple periods of flood (high flow) and drought (low flow) superimposed on a long-term linear decline in discharge rate that led to recently recorded low flows. Is it because of dreaded climate change, especially during the period of record low monthly flows observed during 2010 and 2011? According to the authors, this drought produced “widespread negative impacts on the economy and ecology of the basin.”

In order to generate a longer, “proxy” record of streamflow, Harley et al. analyzed new and existing tree-ring chronologies from multiple tree species to produce a reconstruction of March through October Suwannee River discharge for the past 450 years. The method is in principal straightforward, requiring a composite of the tree-ring data be statistically related to the observed streamflow records, and then back-calculating the proxy streamflow prior to the instrumental record.

There are a lot of solid criticisms of the use of tree rings to generate proxy temperatures, mainly because, in many instance, the ring width is a more a function of available water than it is one of temperature. The relation to rainfall is especially strong in an environment like Florida, where warm-season temperatures vary little from year to year.

Results of their analysis are shown in the figure below, which displays an 11-year running mean of standardized river flow anomalies relative to the long-term mean (1550-2005). The most intense and prolonged wet and dry periods did not occur during the instrumental record. Rather, they occurred during the historic past long before humanity increased the CO2 concentration of the atmosphere by any significant amount. What is more, it is interesting to note the “drastic hydroclimatic shift” from extremely dry to extremely wet conditions that occurred naturally around 1860. And as for the cause(s) of the streamflow variability, Harley et al. report finding multiple periodicities in the reconstructed data (2-5, 7, 11, 45 and 85 year bands are statistically significant), which, they suggest, indicate “the important influence of coupled oceanic-atmospheric processes” over the past four-and-a-half centuries. 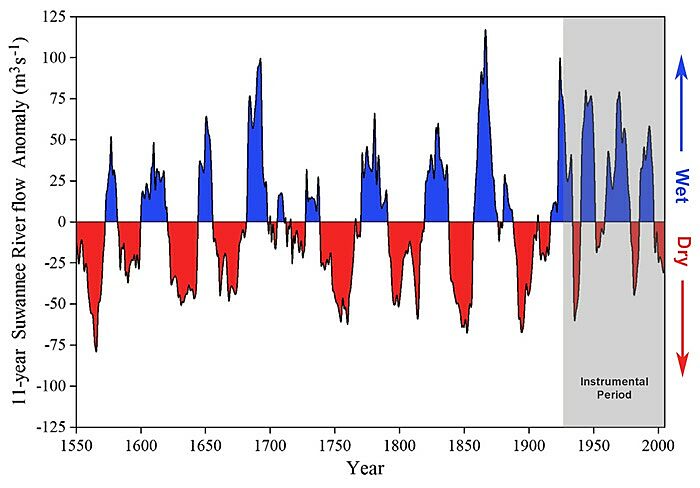 Figure 1. Historic streamflow of the Suwannee River based on an 11-year running mean of standardized river flow anomalies relative to the long-term mean (1550-2005). Adapted from Harley et al. (2017).

The take-home message of Harley et al.’s work is summarized in their statements that (1) “we found that instrumental period flow conditions do not adequately capture the full range of variability of the Suwannee River beyond the observational period,” and (2) wet-period “pluvials and droughts that eclipse instrumental events in terms of severity and duration have occurred during the 16-19th centuries,” which latter finding they add is “echoed by other studies of long-term precipitation variability in the Southeast U.S. (e.g., Stahle and Cleaveland, 1992; Cook et al., 2007; Seager et al., 2009).”

Clearly, therefore, based on the material presented in the work of Harley et al., there is no discernible human impact on Suwannee River streamflow over the instrumental record; and there is no compelling reason to conclude that anything other than natural climate variability has contributed to the extreme wet and dry periods observed in this portion of the globe over the past 450 years.

Seager, R., Tzanova, A. and Nakamura, J. 2009. Drought in the southeastern United States: causes, variability over the last millennium, and the potential for future hydroclimate change. Journal of Climate 22: 5021–5045.

Stahle, D.W. and Cleaveland, M.K. 1992. Reconstruction and analysis of spring rainfall over the southeastern US for the past 1000 years. Bulletin of the American Meteorological Society 73: 1947–1961.