The largest study—by far—on temperature-related mortality was published by Gasparrini et al. in the journal Lancet in 2015. They examined over 74 million (!) deaths worldwide from 1985 to 2012 and found that the ratio of cold-related to heat-related deaths was a whopping 17 to 1. Moreover, the temperature percentile for minimum mortality was around the 60th in the tropics and “80–90th” in the temperate zones. Based upon real-world data, it is obvious that global warming is going to directly prevent a large number of deaths.

One of us (Michaels) co-authored a peer-reviewed literature article showing that as heat waves become more frequent, heat-related deaths decrease because of adaptation. Given that our cities are heating up on their own—without needing a push from greenhouse gases—under our hypothesis, heat-related mortality should be dropping, which it is.

But what about morbidity (sickness), as opposed to mortality? For that, we should be looking at emergency room visits, where people go because they are really feeling crummy or have a physical injury. Turns out everyone has been looking at death, but few at debilitation.

Now comes a new paper from Zhao et al. (2017). They examined the association between daily mean ambient temperature and emergency department visits in twelve Chinese cities over the period 2011–2014. Two were in the cool north, six from the central region and four in the hot and humid south.

As represented by the pooled national data as shown in the figure below, the relative risk of emergency department visits increases as temperatures become both warm and cold. However, the risk is far greater for cold temperatures, where the cumulative relative risk is 1.80 (nearly twice as likely compared to average temperatures) versus a much smaller 1.15 (a 15% increase in prevalence) that was associated with hot temperatures. Additionally, Zhao et al. determined that the effects of cold spells on emergency department visits were much more persistent, lasting a full 30 days compared to the more acute, but short lived, effects of warm spells that lasted a mere three days, or one-tenth of the time. 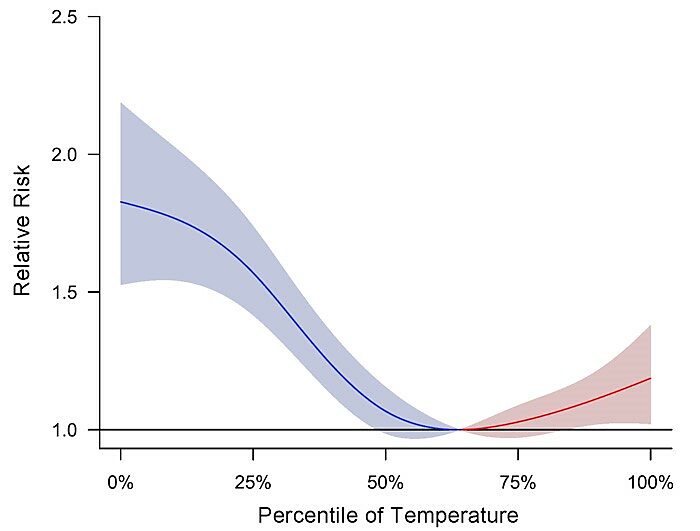 Figure 1. Pooled national level cumulative association between temperature and emergency department visits over a lag of 0–32 days during 2011–2014. Adapted from Zhao et al. (2017).

Other important findings included the observation that the temperature percentile associated with the least amount of emergency department visits was 64. Given that the average climate in China varies from tropical to pretty darned cold, it’s probably somewhat more tropical than temperate. Their optimum temperature is very consistent with what was found in the Gasparrini et al. study. At 14 percentage points higher than 50, this fact (along with Gasparrini et al.) suggests that humans are much better adapted to warmer temperatures than cold. Zhao et al. also found that the temperature effect on emergency department visits varied by latitude; the effect of extreme cold was higher in the southern cities and declined northward, whereas the effect of extreme heat was higher in the northern cities and declined southward, which suggests a form of regional adaptation to temperature, similar to what we (Michaels) found for U.S. cities in our work on urban heat-related mortality.

In stratifying their analysis by gender and age, the thirteen researchers report that the temperature/emergency department visit relationship was unaffected by gender but was attenuated with increasing age, which contradicts other, more speculative work on Chinese urban heat-related mortality. At the national level, the relative risk of emergency department visits due to cold declined from 2.27 for the youngest age group (0–14 years) to 2.17 for ages 15–34, 1.60 for ages 35–64 and 1.41 for the elderly aged 65 and older. Similarly, the risk of emergency department visits due to hot temperatures also declined from 1.51 for 0–14 years to 1.19 from ages 15–34, 1.14 for ages 35–64 and 1.08 for those over age 65. Children of ages 0–14 were the most vulnerable to cold spells and heat waves over the period of study.

In considering all of the above findings, plus those reported in numerous other studies of the subject, it is clear that the impact of cold weather on human health is much more severe and longer lasting than that caused by heat waves. The truth be told, as shown by real-world numbers, humanity has much more to gain in terms of physical heath from rising, as opposed to falling, temperatures.