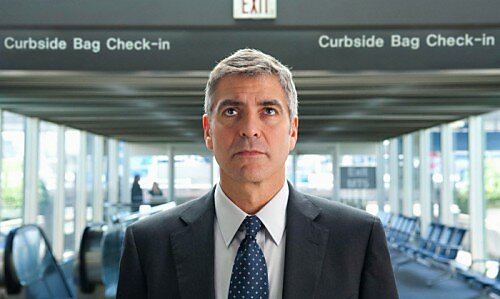 Running the airport maze to board my flight from Madrid back to the U.S. last week, I found myself thinking, with no small measure of envy, about Ryan Bingham, George Clooney’s character from Up in the Air. The ultimate frequent flier, Bingham slides shoes and belt off, flips laptop from case, and aligns them neatly on the x‐​ray conveyor in a seamless, fluid display of security Tai Chi. He navigates from curb to gate and back with crisp efficiency, every motion practiced and automatic.


My envy was tempered somewhat as I reread Discipline and Punish on the trip back. Bingham’s military precision, it struck me, was the product of a form of training implicit in the security process. As a corrective brace “teaches” the proper posture just by making it the only comfortable one, the screening procedures embed a set of tacit instructions, consisting of the optimal set of motions required to pass through smoothly. And of course, it teaches more than bodily motions: Bigham knows you don’t stand behind the Arabs in the screening line!


That’s not to say airport security is some kind of insidious brainwashing program, but there’s a dimension of privacy here that it seems to me we don’t talk about nearly enough. Our paradigms of privacy harms are invasion (the jackboot at the door, in the extreme case) and exposure (the intimate detail revealed). We generally think of these as exceptions — as what happens when surveillance goes wrong, either because it gets the wrong target or, when the surveillance is universal by design, because information that’s supposed to remain protected falls into the wrong hands or is otherwise misused. Invasion and exposure may be serious problems, but they are fundamentally mistakes — hiccups in the system we can seek to fix.


Discipline, by contrast, is what inevitably happens when the system functions as intended, at least to the extent people are conscious of being (actual or potential) targets of surveillance. It is probably not as serious a harm as invasion or exposure most of the time, but it’s also by far the most pervasive and ineradicable effect of surveillance. It would be nice if our debates about surveillance included not just the question “What will be exposed?” but also “How — and for what — are we training ourselves?”