FISA Applications Are Down, but Is Surveillance? 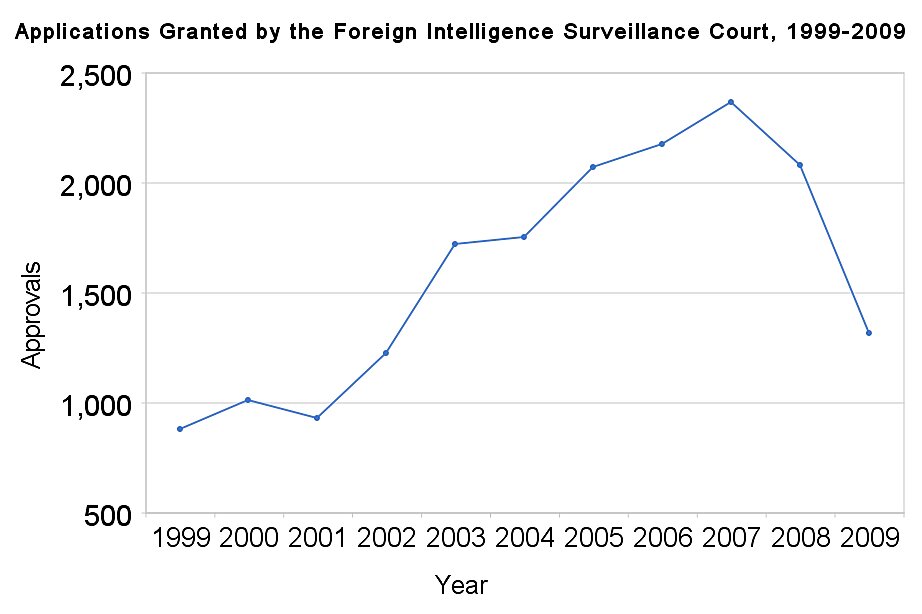 The invaluable Main Justice blog notes that we've just gotten our annual dribble of information from the Foreign Intelligence Surveillance Court, showing that the number of surveillance applications sought and approved by the court dropped for a second consecutive year, to their lowest  level since 2002. Applications fell to 1,376—down from 2007's record high of 2,370.

So does that mean there's less FISA surveillance going on? Nope—according to an anonymous source at the Justice Department, you can't infer much from the raw numbers, especially given the passage of the FISA Amendments Act of 2008, which empowered the executive branch to authorize broad programs of surveillance with slight court oversight:

“The number of Foreign Intelligence Surveillance Act applications submitted to the Foreign Intelligence Surveillance Court decreased in 2008 and again in 2009 due to significant changes in the legal authorities that govern FISA surveillance — specifically, the enactment of the FISA Amendments Act in 2008 — and shifting operational demands, but the fluctuation in the number of applications does not in any way reflect a change in coverage,” the official said.

I note with some disappointment that the normally astute folks at Main Justice repeat the canard that the FISA Amendments Act were a response to a 2007 court ruling that "surveillance of purely foreign communications that pass through a U.S. communications node was illegal without a warrant." Boosters of broader executive power trumpeted that line, but as we learned in 2008, the court's limitations were really centrally about certain kinds of e-mail traffic; it has never been the case that purely foreign communications in general required a warrant if they passed through the U.S.—and indeed, nobody reading the plain text of the FISA law could possibly believe that to be the case.

In any event, as I suggested recently when last year's criminal wiretap figures were released, this is one more reason to suspect that current reporting requirements amount to so much oversight theater—giving us the illusion that we have some understanding of the real scope of electronic surveillance, while providing (at best) a spotty and incomplete picture.