Both the Washington Post and NPR refer to the Tenth Amendment as a "tea party favorite." I would have thought that tea partiers -- and most of the rest of us -- liked all 10 of the Bill of Rights, and indeed the rest of the Constitution as well. Now, sure, I guess if the ACLU could publish (in the 1970s or 1980s) the poster below, an "illustrated guide to the Bill of Rights" featuring only the First, Fourth, Fifth, Sixth, Eighth amendments (and only parts of those), along with the Fourteenth, Fifteenth, and Nineteenth amendments, which are not part of the Bill of Rights -- well, then, I guess the Tea Party is entitled to have its own favorite parts of the Bill of Rights. But then, it was NPR and the Washington Post, not tea partiers, who suggested that the Tenth Amendment was perhaps uniquely a "tea party favorite." I would urge the ACLU, the Tea Party, and all other Americans who care about freedom to consider the entire Constitution a "favorite." Of course, the Tenth Amendment is pretty crucial, reminding policymakers that the federal government does not have any powers not delegated to it in the Constitution. 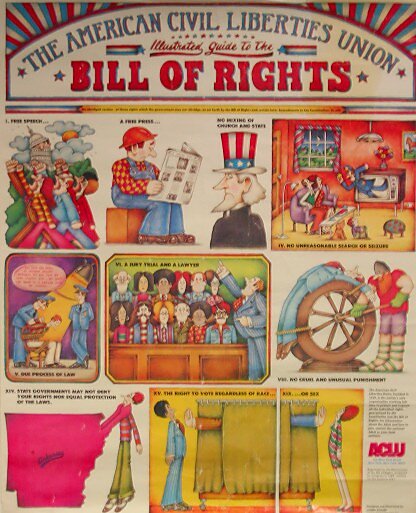