I wrote earlier this year about the connection between a morally corrupt welfare state and the riots in the United Kingdom.


But what’s happening now is not just some left‐​wing punks engaging in political street theater. Instead, the UK is dealing with a bigger problem of societal decay caused in part by a government’s failure to fulfill one of its few legitimate functions: protection of property.


To make matters worse, the political class has disarmed law‐​abiding people, thus exacerbating the risks. These two photos are a pretty good summary of what this means. On the left, we have Korean entrepreneurs using guns to defend themselves from murdering thugs during the 1992 LA riots. On the right, we have Turkish entrepreneurs reduced to using their fists (and some hidden knives, I hope) to protect themselves in London. 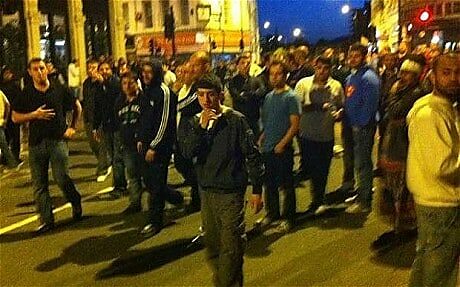 Which group do you think has a better chance of surviving when things spiral out of control? When the welfare state collapses, will the Koreans or the Turks be in a better position to protect themselves? And what does it say about the morality of a political class that wants innocent people to be vulnerable when bad government policies lead to chaos?


Speaking of chaos, let’s look at the “root causes” of the riots and looting in the United Kingdom.


Allister Heath is the editor of City A.M. in London, and normally I follow his economic insights, but his analysis of the turmoil is superb as well. Here’s an excerpt. But as Instapundit likes to say, read the whole article.

Debilitating, widespread fear. The country held to ransom by feckless youths. Thousands of shocked Londoners cowering in their homes, with many shops, banks and offices shutting early. …It no longer feels as if we live in a civilised country. The cause of the riots is the looters; opportunistic, greedy, arrogant and amoral young criminals who believe that they have the right to steal, burn and destroy other people’s property. There were no extenuating circumstances, no excuses. …decades of failed social, educational, family and microeconomic policies, which means that a large chunk of the UK has become alienated from mainstream society, culturally impoverished, bereft of role models, permanently workless and trapped and dependent on welfare or the shadow economy. For this the establishment and the dominant politically correct ideology are to blame: they deemed it acceptable to permanently chuck welfare money… Criminals need to fear the possibility and consequence of arrest; if they do not, they suddenly realise that the emperor has no clothes. At some point, something was bound to happen to trigger both these forces and for consumerist thugs to let themselves loose on innocent bystanders. …the argument made by some that the riots were “caused” or “provoked” by cuts, university fees or unemployment is wrong‐​headed. …the state will spend 50.1 per cent of GDP this year; state spending has still been rising by 2 per cent year on year in cash terms. It has never been as high as it is today – in fact, it is squeezing out private sector growth and hence reducing opportunities and jobs. …This wasn’t a political protest, it was thievery. …We need to see New York style zero tolerance policing, with all offences, however minor, prosecuted. But what matters right now is to regain control, to stamp out the violence and to arrest, prosecute and jail as many thugs as possible. The law‐​abiding mainstream majority feels that it has been abandoned and betrayed by the establishment and is very, very angry.