Dangerous Lessons in Islamophobia at the FBI

In a disturbing piece for Wired, my friend Spencer Ackerman reports on the appalling contents of training sessions on Isla 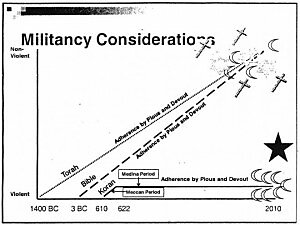 m delivered to FBI agents, which suggest that all devout Muslims ought to be considered as prone to violence and terrorism.


One comically amateurish chart even purports to graph the historical propensity for violence of the three main Abrahamic faiths. As you can see, Islam seems to rapidly plateau at a very high level of relative violence on some kind of made‐​up scale—though hard as I squinted, I couldn’t detect a blip in any of the lines around the 12th century that might correspond to the Crusades.


One presentation makes it quite explicit that, in the analyst’s view, the problem is not Islamic “extremism,” but the inherent propensity for violence of Muslims as such:

In other words, FBI agents are effectively told that Osama bin Laden was correct, and that a sincere Muslim who understands and practices his faith correctly will naturally be a terrorist. It would be offensive in any context for the government to sponsor this kind of smear session against the enormous peaceful majority of its Muslim citizens, but it’s downright dangerous in light of the vast expansion of FBI surveillance authorities over the past decade.

An agent in any of the FBI’s 56 field offices can issue National Security Letters demanding potentially sensitive financial, phone, and Internet records with only the approval of the office’s Special Agent in Charge. The agent need only assert that the records are “relevant” to an investigation to protect national security; there’s no need for any evidence that the persons under scrutiny are involved in wrongdoing, and normally no judicial involvement at all. Unsurprisingly, these requests are issued in massive numbers, with a record 14,212 Americans targeted by NSLs last year alone. Though the overwhelming majority will be cleared of suspicion, those records will remain in government databases for decades. FBI investigative guidelines, meanwhile, continue to be revised so as to give agents ever more latitude to “check out” people who might be worth investigating, expanding the scope of what agents may do without opening a formal investigation or even explaining or making a record of their actions.


These authorities are dangerous enough to civil liberties by themselves. But combined with the kind of “training” uncovered by Wired, they are a recipe for abuse. Imagine a fresh‐​faced Quantico grad charged with “connecting the dots” to preemptively ferret out terrorists before they strike. After having been told by the Bureau’s own appointed experts that devout Muslim faith—even of the “mainstream” variety—is inherently a strong predictor of jihadist violence, should we be surprised if some agents conclude it’s their duty to “check out” the conspicuously devout, just in case? The rule book may contain the requisite injunction about not targeting people solely on the basis of faith, but the clear message of these presentations is that piety is, in itself, grounds for suspicion. And the post‐​9/​11 emphasis on “flexibility” over old‐​fashioned checks and balances makes it less likely that judges or supervisors will take note and intervene when misguided agents attempt to go too far.


In just four months during late 2008 and 2009, the FBI opened 11,667 “assessments” of people and groups, and went on to open 427 “preliminary” or “full” investigations on the basis of the information gleaned from those assessments. That’s an astonishing number of people put under FBI scrutiny, especially given how few of those inquiries appear to have borne any fruit. But if the Bureau is training agents to regard 2.5 million American Muslims as jihadis‐​in‐​waiting, maybe we should be relieved the number isn’t higher still.