Have climate models, which are claimed by our friends like Ben Santer, to accurately represent the climate of the 20th century gotten things right for the wrong reasons?  New research on the role of carbon aerosols suggests that this may be the case. If it is, it does not bode well for the accuracy of forward projections made by the same climate models.

This would represent a classic case of “overfitting”— building a model with bells and whistles added and tuned so as to match the data at hand, but which then breaks down when trying to predict out-of-sample observations. This occurs because the overfitted model has been polished up to give the appearance of capturing the underlying behaviors driving the system—an appearance that is often good enough to fool even the model builders—but, in fact, the appearance is only skin deep, and the mechanisms driving things in the real world differ from those from which the model was built.

A recent paper by Dr. Tami Bond and colleagues finds that carbon aerosols—particulates released into that atmosphere from a variety of human activities including diesel engines, open cook stoves, poorly filtered coal burning, and open burning, etc.—have played a much larger role in impacting the climate than has been previously recognized (and included in climate models).

For instance, Bond et al. report that black carbon aerosol, or soot, is second only to carbon dioxide as the substance emitted by human activity that has the greatest warming influence on the climate—contributing a quarter (or perhaps even a bit more) to the current overall anthropogenic warming effect. Bond et al. find that the total warming impact from black carbon emissions is about 70% as large as that from carbon dioxide emissions.

These finding are similar to those reported a few years ago by Ramanathan and Carmichael but grossly dissimilar to those from the U.N.’s  Intergovernmental Panel on Climate Change (IPCC), which says that black carbon is responsible for only about 10% of the total anthropogenic warming influence.

Apparently, climate models incorporate even less of an influence from black carbon.  According to Bond et al. “global atmospheric absorption attributable to black carbon is too low in many models, and should be increased by a factor of almost three.”

There are several interesting implications.

When divvying up the causes of the observed global warming over the past 50 years, a much larger percentage is now recognized to result from something other than carbon dioxide and other greenhouse gases.

Figure 1 shows our tally, based on the IPCC’s latest climate compendium, and the results from Bond et al. 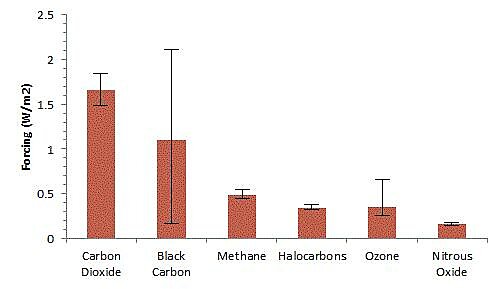 If you combine the results in Figure 1 with those recently reported concerning other (non -greenhouse gas) influences on the observed temperature history, you must conclude that carbon dioxide was responsible for less than one-third of the observed warming since the mid-20th century reported in the IPCC’s Fourth Assessment Report.  Further, the warming from all greenhouse gases amounts to something less than 60% of the total.

Another eye-opening consequence of the Bond et al. finding is that the modeled climate change “fingerprints” are missing the influence of black carbon—which is now much larger (and consequently much more important) than has been recognized.

That “fingerprint” studies have proclaimed success at matching observed patterns of climate change with those projected by climate models run with anthropogenic atmospheric inputs—yet which omit black carbon—can only be a sign of overfitting.

All else being equal, if the black carbon absorption in climate models were to be increased by a factor of almost three (to better match the findings of Bond et al.), they would certainly predict far too much warming to have already occurred. But these models have already accomplished this without black carbon!

One potential reason is that “all else is not equal.” When black carbon is emitted, so is all sorts of other stuff, like sulfur dioxide and organic carbon. These tend to have a cooling impact on the climate, as they generally act to increase the amount of solar energy that is reflected back into space.

According to Bond et al., although the amount of (warming) black carbon emitted into the atmosphere has been underestimated, so too has the amount of the (cooling) co-emissions.  When everything is tallied up in net, the effect turns out to be very near zero.

One might argue that if the net impact is zero, it doesn’t matter that the climate models have the wrong amount of black carbon (and co-emissions) in them.

But this would be a far too generous and simplistic.   The historical (in both time and space) characteristics of black carbon emissions, although not well known, are almost certainly different from the characteristics of historical emissions of greenhouse gases (and sulfate aerosols). The difference arises because the sources of the different types of emissions are, to an important degree, not the same.

Until you have a pretty good handle on the sources, and how they have changed over time (in magnitude and space), there is no way to way to get an accurate handle on projections, either in the past or the future.

So “fingerprint” studies which claim to find close correspondence between climate model projections and actual observations during the past 50 to 100 years are confused as to both causes and effects.

Tainted and confused models are the last thing we need for producing science-based policy.