Lawrence Livermore National Laboratory’s Benjamin Santer and his mentor, Tom Wigley, of the National Center for Atmospheric Research seem, well, a little obsessed over Cato’s Pat Michaels.  First, Santer threatened to “beat the cr&p out of him”, and then Wigley tried to foment a cabal to “re-assess” his doctoral dissertation, under grounds that were completely, unalterably, and demonstrably 100 percent false.

So it’s no surprise that they have just published—two years after the fact—what they consider to be a rejoinder to Michaels’ 2010 testimony to the Subcommittee on Energy and Environment of the Committee on Science and Technology of the United States House of Representatives.  There’s about as much real substance here as there was in Wigley’s very ill-informed (and seemingly actionable, if Michaels didn’t have a day job here at Cato) campaign against his doctorate.

It’s just been published in the journal Climate Dynamics.  This is technically peer-reviewed, but, judging from the climategate emails and the serial paper trail of threatening journal editors (say, by writing to the University administrations where they worked) as well as the less than high quality contents of the actual paper, it makes you wonder just how critical the reviewers actually were.

In their paper, Wigley and Santer wrote:

Michaels’ 2010 Congressional testimony...is in conflict with the results presented here. This testimony makes the claims that “…greenhouse-related warming is clearly below the mean of relevant forecasts by IPCC”, and that “… the Finding of Endangerment from greenhouse gases by the Environmental Protection Agency is based on a very dubious and critical assumption”. The “assumption” referred to here is the IPCC statement that is the primary focus of the present paper, i.e., the statement that most of the warming since 1950 is very likely due to the human-caused increase in greenhouse gas concentrations.

Regarding Michaels’ statement that “…greenhouse-related warming is clearly below the mean of relevant forecasts by IPCC” Wigley and Santer argued that:

Roughly half of these [IPCC climate model] simulations did not consider the cooling effect of indirect aerosol forcing, so the results, on average, would be biased towards trends that are warmer than observed even if the models were perfect (cf. Santer et al. 2011).

So the climate models are biased to producing more warming than is observed? Isn’t that what Michaels said? These guys just won’t take “yes” for an answer.

And in fact, the reference in the above quote to “Santer et al. 2011” is a paper published by Santer and Wigley (and 15 others) that finds:

That says what you think it says! Model temperature trends are always higher than the observed temperature trends and that over longer periods (i.e., more robust analysis) the model/observed discrepancy grows. Here is the relevant figure from that paper. 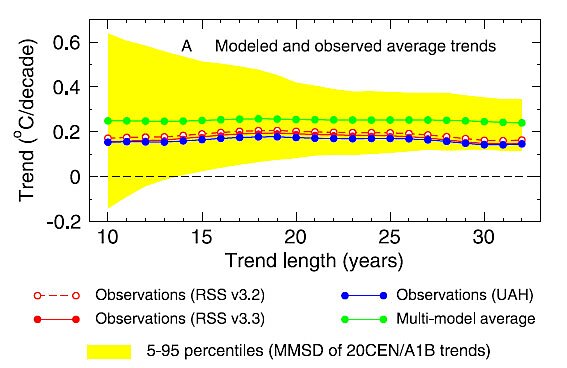 Figure 1. A comparison between modeled and observed trends in the average temperature of the lower atmosphere, for periods ranging from 10 to 32 years (during the period 1979 through 2010). The yellow is the 5-95 percentile range of individual model projections, the green is the model average, the red and blue are the average of the observations, as compiled by Remote Sensing Systems and University of Alabama in Huntsville respectively (adapted from Santer et al., 2011).

Their own analysis supports Michaels’ contention, which they somehow say is wrong.  Beats me.

In fact, their picture looks an awful lot like the one that Michaels used in his testimony (Figure 2). 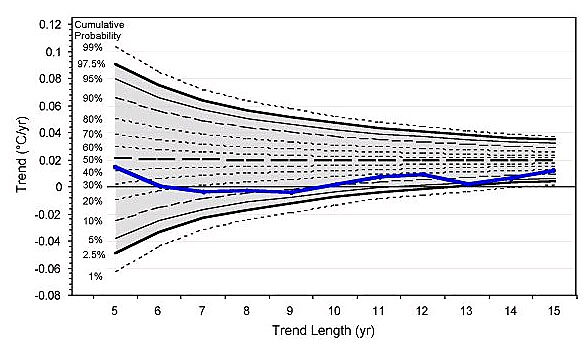 It’s worth noting that Michaels’ was the first presenter of this type of chart several years ago.  In fact, Wigley reviewed a paper it was in, helped get the editor to kill it, and then, with Santer, published something mighty similar.  How strange for someone they are arguing is wrong.

Wigley and Santer spill a lot of ink over the concept that in the absence of everything else, that the potential warming from anthropogenic greenhouse gases is likely greater than the observed warming. Michaels didn’t say that it wasn’t. In fact, most people believe this as true.

Michaels was concerned about the observed warming not some hypothetical, unrealizable (and therefore unverifiable) change. After all, it is the actual warming that the environment largely responds to. So when assessing the accuracy of the IPCC statement on observed warming, it is therefore appropriate to divide it up between various elements as he did.

While there’s a lot of gory detail in this discussion (see here, for more ), one thing that I think we all should be able to agree on is that it is physically impossible for something (like the emissions of anthropogenic greenhouse gases) to be responsible for causing more than 100% of what has been observed, and that such statements like this one from Wigley and Santer’s paper,

Here, the probability that the model-estimated GHG component of warming is greater than the entire observed trend (i.e., not just greater than ‘‘most’’ of the observed warming) is about 93%.

is something other than science, because one surely cannot find something that nature will not reveal.

The bottom line here is that in their paper, Wigley and Santer seem to place more import on the attack of Pat Michaels, than they do on the actual logic behind it.