Could President Obama have picked a worse time to announce his Climate Action Plan?

Global warming has been stuck in neutral for more than a decade and a half, scientists are increasingly suggesting that future climate change projections are overblown, and now, arguably the greatest threat from global warming—a large and rapid sea level rise (SLR)—has been shown overly lurid (SOL; what did you think I meant?).

You hardly need an “action plan” when there is so little “action” worth responding to.

As I frequently discuss the lack of warming and the decreases in the estimates of future climate change, I’ll focus here on new scientific findings concerning the potential for future sea level rise, interspersing a little travelogue.

Projections of a large sea-level rise this century depend on rapid ice loss from Greenland and/or Antarctica. Yes, as ocean waters warm, they expand, but this expansion-induced rise is pretty well constrained and limited to being about 6 inches plus or minus a couple of inches by century’s end. And the contribution from melting glaciers/ice in other parts of the world (not counting Greenland and Antarctica) is even smaller, maybe 2-4 inches. So that adds up to about 8-12 inches of sea level rise by the year 2100—not much different than that which has already occurred over the past century. This is hardly catastrophic.

Here is an example of the latter.

A breathless passage from the book version of Al Gore’s An Inconvenient Truth:

I flew over Greenland in 2005 and saw for myself the pools of meltwater covering large expanses on top of the ice. …These pools have always been known to occur, but the difference now is that there are many more of them covering a far larger area of ice. …In Greenland, as in the Antarctic Peninsula, this meltwater is now believed to keep sinking all the way down to the bottom, cutting deep crevasses and vertical tunnels that scientists call “moulins.”

When water reaches the bottom of the ice, it lubricates the surface of the bedrock and destabilizes the ice mass, raising fears that the ice mass will slide more quickly towards the ocean.

Tony Blair’s advisor, David King, is among the scientists who have been warning about potential consequences of large changes in these ice shelves. At a 2004 conference in Berlin, he said: THE MAPS OF THE WORLD WILL HAVE TO BE REDRAWN. [all caps in original]

Gore went on to include page after page of now and then maps of the world’s major cities after a sea level rise of 20 feet (of course, assuming no adaptive measures put in place).

But Gore’s disaster mechanism has been shown to be impotent and ineffective. In fact, a collection of recent papers published in the peer-reviewed scientific literature basically dispels all myths foretelling a large sea level rise this century coming from ice loss on Greenland. Recent research on Antarctica largely does the same.

First off, research by Sarah Shannon and 18 co-authors takes direct aim at Gore’s mechanism in their paper “Enhanced basal lubrication and the contribution of the Greenland ice sheet to future sea-level rise.” Here is what they conclude, in direct opposition to Gore’s claims:

Although changes in lubrication generate widespread effects on the flow and form of the ice sheet, they do not affect substantial net mass loss; increase in the ice sheet’s contribution to sea-level rise from basal lubrication is projected by all models to be no more than 5 percent of the contribution from surface mass budget forcing alone.

And “no more than 5 percent” turns out to be, by the year 2100, somewhere between 0 and 3 millimeters, or in English units, a tenth of an inch or less. Some disaster. Certainly “18 to 20 feet” is a lot scarier, but it is just plain wrong.

Another new study looks at (among other things) the sea-level rise effect of the acceleration of the discharge rate of those glaciers across Greenland, which directly empty out into the sea. Heiko Goelzer and fellow researchers found that after an initial bump in the contribution to sea level rise as these glaciers retreat, once they draw back to the grounding line—the point where the outlet glaciers stop floating and instead rest on the bedrock—the loss rate slows dramatically. They conclude that the contribution from dynamical changes to the flow rate of outlet glaciers may contribute between 8 to 18 millimeters of sea level rise by the year 2100. That is about a quarter to three-quarters of an inch. Again, not even close to a disaster.

Here’s your climate news scoop of the day: The highest discharge-volume glacier in the entire Northern Hemisphere—Greenland’s Jakobshavn—has grounded, which is really going to put the kibosh on the Greenlandic myth. Here’s a picture I took from my own Greenland sojourn* earlier this summer. It shows the southern end of Jakobshavn glacier, on June 24.

Looking south along the calving front of the Jakobshavn glacier, June 24, 2013. Photo by Patrick Michaels.

You can see that it is grounded over most of its humongous 10-kilometer face. The calved ice drops off in smaller chunks, dramatically reducing the size of the bergs that will eventually float down the spectacular Ilulissat Icefjord.

A small portion of the glacier was perhaps still floating when I was there, right near the north end, as indicated by a reduction in the height of the calving face, as shown in this photo. 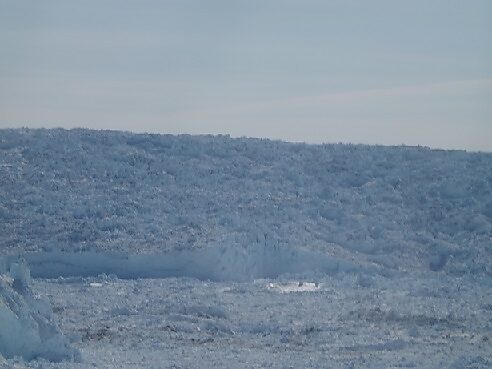 Looking north along the calving front of the Jakobshavn glacier, June 24, 2013. Photo by Patrick Michaels.

As a tidewater glacier, Jakobshavn regularly calves some tremendous icebergs that take a couple of years to make their way down the 35-mile fjord, only to ground on the terminal moraine near Ilulissat (and conveniently located in view of the Hotel Arctic’s live webcam, here). Because the glacier has largely grounded, these bergs are not the giants that they once were (although some sizeable icebergs continue to be produced in the early summer as the floating ice tongues established in the winter break up). Hie thee to Ilulissat! The sooner the better!! Presumably some views through the webcam (which was near my room) will convince you!

(The terminal moraine near Ilulissat dates to the end of the Little Ice Age—meaning that the productive fishery at the mouth of the fjord was probably inaccessible. Farther south, such an expansion of ice no doubt covered much of the Viking pastureland, chasing them to places elsewhere (including North America?)).

A third new study examined the direct contribution of changes in the surface mass balance (SMB) of Greenland (that is, total run off from ice melting minus total gains from enhanced snowfall) to future sea level rise (they did not consider ice loss from glacier speed). In their study “Estimating the Greenland ice sheet surface mass balance contribution to future sea level rise using the regional atmospheric climate model MAR,”  Xavier Fettweis and colleagues found that declines in the SMB by the year 2100 led to somewhere between 2 centimeters and 13 centimeters of sea level rise, depending of the carbon dioxide emissions scenario used in their model. That’s somewhere between 1 and 5 inches (and these projections are based on climate models which, according to the latest science, overestimate future warming by some 70 percent).

So adding all of these effects up—basal lubrication, glacial dynamics, and enhanced melting—the total global sea level rise by the end of the 21st century originating from Greenland projected by the latest, greatest scientific studies averages out to be maybe 3 to 4 inches. Ho hum.

Like I said, sea level rise disaster scenarios that are dreamed up by Greenland shedding large volumes of ice (a la Al Gore, Jim Hansen, etc.) are SOL.

*Get that ticket to Greenland pronto!  Travel hint: the shortest route is through Reykjavik on Iceland Air and then on Air Iceland to Ilullisat.  Reserve in advance and you can get a Saga Class (business) seat for pretty cheap compared to the Majors (which will take you all the way to Copenhagen and then backtracking on Air Greenland’s A330 to Kangerlussaq (Sondre Stromfjord) and an additional connection to Ilulissat, i.e. $$$$).